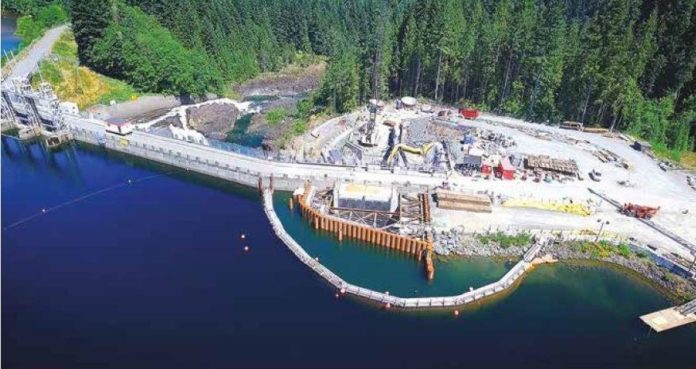 The first public-private partnership project in the hydropower sector in Canada houses a brand new underground powerhouse built to minimise the environmental footprint and offer higher safety in case of a seismic event.

Built in 1947, John Hart Generating Station was aging and needed to be replaced. The existing facility and penstocks were unlikely to withstand a moderate earthquake and the generating station was in a poor condition, leading to declining electricity output. Ninety-five percent of the lower Campbell River comes out of the John Hart Generating Station, which means that a new, more efficient, and more reliable facility was needed, including a new water bypass to ensure that if up to three of the new generators go offline, water flow can be maintained, protecting fish and fish habitat.

Partially financed by InPower BC, the $1.093 billion project was the largest infrastructure project undertaken by BC Hydro since the 1980s, although the recent Site C Project is now the largest. The request for proposals from BC Hydro was issued in 2012, and the P3 design and construction contract was awarded in February 2014 with construction starting soon after. Several comparative assessments were conducted on alternative schemes during the initial phases of the proposal stage, convincing BC Hydro to include an underground powerhouse as part of the contractor-proposed scheme.

The utility’s original intent was to have a surface powerhouse, which would have necessitated an extensive steel lined section of the underground power tunnel.

This article was originally published in The Global Power & Energy Elites 2020. Read the full article here