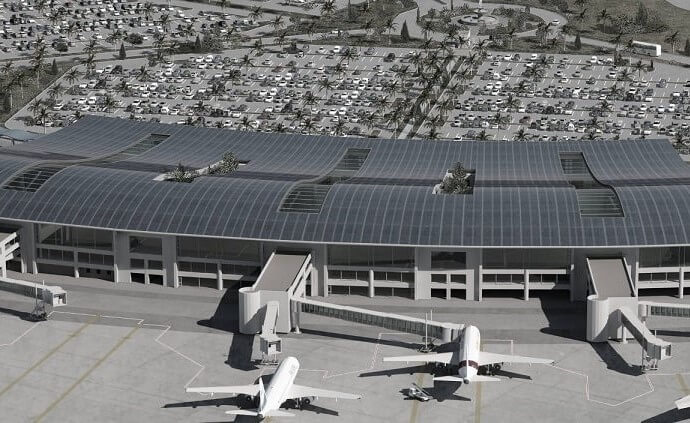 The project is the largest rooftop photovoltaic (PV) installation of its kind in Africa and one of only a few global examples where solar has been used as a primary source of power for an airport.

The project – part of a major enlargement and modernisation initiative at the airport by the country’s transport ministry – will see the PV plant generate approximately 3,038MWh of electricity per year, resulting in the airport receiving almost 30% of its energy from the rooftop installation.

Given the critical requirements for an international airport, which needs to be operational 24 hours per day, the project also demonstrates the potential of solar technology in Algeria, which has traditionally relied on additional off grid power sources such as UPS and gas gensets to power major commercial infrastructure.

While enabling Ahmed Ben Bella International Airport to reduce carbon emissions and become more self-sufficient, it will also support Algeria’s ambition to have 13.5GW generated from solar plants by 2030.

As a country that benefits from a high solar resource, the Algerian government is committed to the development and promotion of renewable energy, with improvements in solar technology and reducing prices to make it an attractive solution for large-scale installations.

FIMER’s chairman, Filippo Carzaniga, said: “This project is significant as it demonstrates the potential of solar as a major source of power for significant commercial buildings in Algeria, particularly for critical pieces of infrastructure such as airports. Being able to play a key role in powering the largest rooftop solar site on an African airport is a great achievement for FIMER. We are pleased to see our reliable and efficient inverter technology helping to maintain uptime as well as support the wider solar generation ambitions of Algeria.”

FIMER worked in partnership with Globale Réalisation, which was responsible for setting all electrical systems at the airport. The company installed 46 FIMER TRIO-27.6 string inverters, which provide all the reliability and flexibility needed to handle any constraints and guarantee a technically-sound plant design. The inverter also has an efficiency of 98.2 percent and comes with two independent MPPTs (Maximum Power Point Tracker) for the best energy harvesting, no matter if the PV plant is arranged with more than a single orientation.

CEO of Globale Réalisation, Mahdi OUNADI, comments: “Algeria is a country that has benefited from rapid population, urbanization and economic growth. With a climate that is highly favourable to solar, we expect this high-profile project to provide an example of what can be achieved, and to encourage future investment in the technology. We chose to work in partnership with FIMER as its inverters are perfectly suited to the outdoor installation and we are able to use its monitoring system to collect and analyze data to ensure the plant is performing in the most efficient way possible. As a result, this project also helps to demonstrate the potential of PV for future major infrastructure projects.”