Electrical energy consumers are demanding better customer service, better power quality, higher energy measurement accuracy and more timely data. Utilities all over the world are being forced to find solutions to getting more information on the population’s power consumption. The automatic meter reading system (AMR) is one way utilities are achieving this. Moreover, dozens of new services and benefits are driving utilities to use new approaches introduced by the metering industry. Advanced metering management (AMM), advanced metering infrastructure (AMI) and smart metering are all used simultaneously to fulfil these ongoing requirements, e.g. outage management, prepayment metering, load forecasting, demand response, load control, tamper detection, power quality monitoring, asset management, interface with water and gas meters and many other features that make the metering system one of the key players in the smart grid era.

The electric power grids have been serving their countries for decades. However the risks associated with relying on such traditional grids are increasing every day. Reliability, efficiency, increasing demands, tampering, security, environmental aspects and climate change, are all concerns facing the existing grids worldwide.

Reliability: There have been huge blackouts and brownouts all over the World in the past 30 years, and more are occurring due to the slow response of mechanical switches, a lack of automatic and artificial intelligence analysis and lack of situational experience on the part of grid operators. Sun Microsystems estimates that a blackout costs the company US$1 million every minute [1].

Efficiency: According to some researches done in USA, if the grid were just 5% more efficient, the energy savings would equate to permanently eliminate the fuel emissions from 53 million cars [1]. If every American household replaced just one incandescent lamp with a compact energy saving fluorescent lamp, the country would conserve enough energy to light three million homes. Imagine how much savings to be achieved in massive population countries.

Increasing demands: Imagine that it is a hot summer with countless commercial and residential buildings operating air conditioners; demand for electricity is being driven higher to its peak. Without a greater ability to predict, without knowing precisely when demand will peak or how high it will go, utilities must bring generation assets called peaker plants online to ensure reliability and meet peak demand. Old peakers are expensive to operate. Whether old or not, additional peakers generate additional greenhouse gases. In addition, peaker plants are assets that sit idle for most of the year without generating revenue.

Tampering: Worldwide, electricity lost due to tampering varies widely by region. The United States probably loses less than 4% to tampering, whereas India reports losses of greater than 10% and losses in some Latin American and African countries can reach 20% [2].

Environmental aspects and climate change: In a lot of countries electricity is still produced by burning coal, a major contributor to global warming. For the sake of saving environment and keeping climate from dramatic changes, renewable sources of energy like solar and wind must be integrated into the nation’s grid. However, without appropriate enabling technologies linking them to the grid, their potential will not be fully realised.

Security: The grid’s centralised structure leaves any nation open to attack either by natural disasters or by terrorism. In fact, dependencies of various grid components can cause domino effect where a cascading series of failures could bring any nation’s communication, transportation, banking, traffic, and security systems to a complete failure. 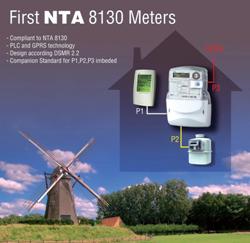 SMART GRID CHARACTERISTICS
All of these concerns, along with others, were the driving forces behind the broader concept of the “Smart Grid” which could be simply defined as a fully connected network system that identifies all aspects of the power grid and communicates its status to automated decision-making systems on that network. Thus, the Smart Grid will be able to [3]:

To justify the characteristics of the smart grid we have to identify the root cause of most problems affecting most of the current grids. If we start analysing previous concerns about the traditional grids, we will find in the back scene “lack of accurate information”. Detailed accurate information is required as a basic step for accurate analysis then proper automated (or even manual) decision making.

AMI is the most important key player in the future smart grid as it represents the connection between energy consumer and energy supplier. This connection delivers timely accurate data to consumer and supplier plus the ability to control loads at the site of consumer.

ISKRAEMECO AND THE SMART GRID VISION
Iskraemeco, as one of the leaders worldwide in energy measurement solutions and products, had adopted in 1988 the Industrial AMR and in 1998 the residential AMR. Since that time Iskraemeco had been after satisfying needs of either energy consumers or suppliers through yearly innovative developed products and systems realising the full featured AMI to achieve the concept of smart grid.

Thus after the success of My37x AMM residential system meters series, the new My38x series is developed to meet the NTA requirements offering many communication options as PLC, GSM/GPRS, RF, Ethernet, RS485 either to the data concentrator then to the central office or directly to the central office .The central office is managed by SEP2W. With the new version, SEP2W is not considered as traditional system software. The SEP2W Manager could be fit to deal with a lot of services as core service (managing different types of databases). Moreover it could be plugged with reporting, alarm, meter reading, web service, meter scheduler and prepayment service. This modular design allows the ability to add more features to the SEP in the future. 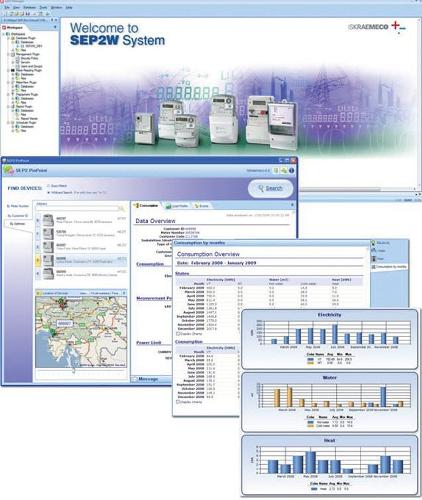 ISKRAEMECO: FAST STEPS TOWARDS SMART GRID
The newly developed system by Iskraemeco, through its different components (My38x, data concentrators and SEP2W), offers both the energy consumer and suppliers many features that can upgrade the current grid towards a smarter grid: