Our parents’ electricity meter provided kWh readings, could only be read with human eyes, and required a machine shop to build. Today’s energy meters provide a laundry list of measurements, can be read from the comfort of your office chair, and require a wave soldering machine to manufacture. The increased complexity in delivering a meter with all of these advanced functions at a lower cost has driven semiconductor companies to pack more features into one integrated circuit device. 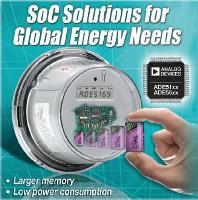 Utilities today demand more measurements from their metering endpoints. They also want their meters to contain enough intelligence to implement advanced billing structures, monitor for tampering, and more. As soon as the meter contains more than one or two measurements, a liquid crystal display (LCD) is required to display all the information. Time-of-use, or multitariff, billing drives the need for a real-time clock (RTC), and the rollout of advanced metering infrastructures requires the inclusion of a port to interface to an external communications module.

The inclusion of these features could require up to six separate integrated circuits in a meter. This high component count and associated costs are unacceptable as the features move into mainstream deployment. Integrating the microcontroller unit (MCU) and peripherals together with the metering front-end has reduced the IC count to only one system on a chip (SoC). The reduction in IC count results in a significant bill of materials (BOM) cost reduction due to three factors: the removal of multiple packages, printed circuit board (PCB) manufacturing yield improvement due to the reduction of solder connections, and overhead reduction by reducing procurement needs.

This integration provides a unique ability to control the system in ways that were not possible with a multiple IC solution. The ADE51xx and ADE55xx families’ system architecture is designed to minimize current consumption in battery mode while maintaining critical features, like displaying multiple LCD screens, maintaining temperature measurement, and keeping accurate timing during a power outage. All of this circuitry operates in the background so that the MCU core can remain in sleep mode during a power outage.

Larger Available Memory Size
The ADE51xx and ADE55xx families provide up to 62 kB of on-chip flash memory and 2 kB of RAM (random access memory). None of the flash memory is used to perform the metrology functions, and therefore it is all available to the meter designer as program or data memory. The availability of a large memory size is critical to development of a meter that will provide advanced communications as the implementation of the communications protocols can be very memory intensive.

The larger available memory size is also important if the meter design is intended to cover multiple metering requirements for different utilities, or if the programming will be performed in high level languages as they tend to generate less optimized code.

The most common housekeeping tasks include adjusting the RTC, calibration for temperature variations, scrolling the LCD display, and checking if line power has been restored. The ADE51xx and ADE55xx provide a full hardware RTC with automatic temperature curvature compensation of the crystal oscillator. The system actively monitors the temperature in battery mode and automatically adjusts the curvature compensation of the RTC. This compensation is required to maintain the high accuracy of the on-chip RTC and is performed with no intervention by the MCU, allowing it to remain in sleep mode. 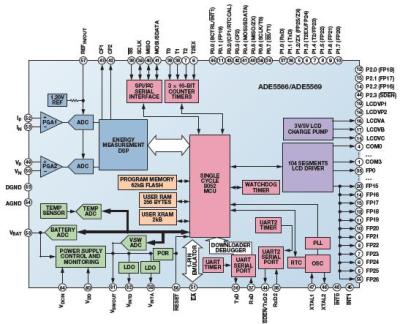 A utility may require that the LCD display scroll through different displays, even during a power outage. In some MCU designs this would require powering up the MCU core to load the new patterns to the LCD driver. The LCD drivers in the ADE51xx and ADE55xx have four LCD RAM banks built in that can store up to four separate LCD patterns. The display can then be set to automatically scroll through the patterns without the need of MCU intervention, allowing the MCU core to remain in sleep mode.

While in battery mode the ADE51xx and ADE55xx continuously monitor the line power to see if it has been restored, and will return the MCU and metrology cores to full operation if it has.

Tamper Detection
The ADE51xx and ADE55xx products differ in that the ADE5166 and ADE5169 include two current channel inputs that are used for tamper detection. The ADE5566 and ADE5569 contain one current channel input for use when antitamper features are not needed. In some countries, it is common practice to use two current sensors in a singlephase design to detect tampering, and the ADE51xx family is ideally suited for this type of application. One current sensor is used to detect phase current and the other to monitor the returning neutral current. The ADE51xx parts monitor both of these currents; and if they differ by more than a specified amount, a flag will be raised indicating that a fault condition has occurred. The ADE51xx will continue to record the proper energy under earth fault and partial earth fault tampering conditions by using the larger of the two current channel inputs in the power calculation.

A more sinister form of tampering is the missing neutral tampering condition. In this type of tampering, the neutral is disconnected from the electricity meter. Without a voltage reference, the meter’s board ground floats to the line voltage and the voltage sampling input is invalid.

There are two problems to solve with this fault condition. First a dc supply needs to be developed from a missing neutral power supply, which can be solved by using a transformer to develop an ac voltage from the ac current still flowing in the wire and then turn the ac voltage into a dc voltage with standard power supply techniques. The second problem is that the metering IC needs to detect this fault condition and record the rms current measurement for future action. The ADE51xx integrates the ability to switch to a missing neutral mode.

Conclusion
Changes in today’s electricity metering market are driving metering IC providers to integrate more functionality and memory into a single chip. This is being driven by trends to increase the number of measurements, to collect and store more data, and to add communication, while maintaining an acceptable cost point. The ADE51xx and ADE55xx product families meet these challenges by providing 4-quadrant measurement capabilities integrated with an MCU core. The MCU core has been optimized for the metering application with special consideration paid to the battery mode power consumption. With all the changes in the metering industry and the larger energy industry, one can only imagine what our children’s electricity meter will look like in the future.