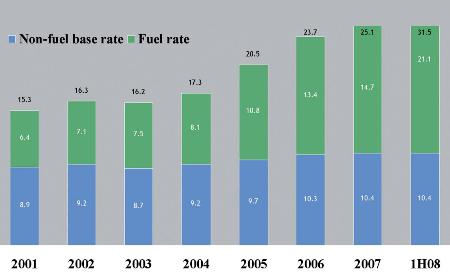 Figure 1 – Price of electricity in Jamaica

Jamaica’s extreme dependence on fossil fuel for the generation of electrical energy added to the non-existence of subsidies in the energy sector has rendered the energy price in the country as volatile as the global fossil fuel price. Figure 1 shows that the positive variance of the non fuel part of the energy price in the last seven years has been negligible in comparison to the variance of the fuel part. Keeping in parity with the global trend of utility system loss for closely comparable countries as measured by socio-economic background, JPS had a trend of losses paralleling the market energy price for end users until something could be done to change it (Figure 2). This loss trend has always opened to question the business viability of JPS, especially as a private entity.

NON-TECHNICAL LOSSES
As a result of investigation, the major part of the JPS system loss was found to be non-technical losses due to unauthorised diversion of energy from the JPS network by various categories of customers as well as consumers who had no business relation with JPS. In order to address this, the decision was made to focus first on the large accounts, of which in JPS there are approximately 7,268 accounts of commercial and industrial (C&I) customers with monthly energy usage of 3,000 kWh and above. 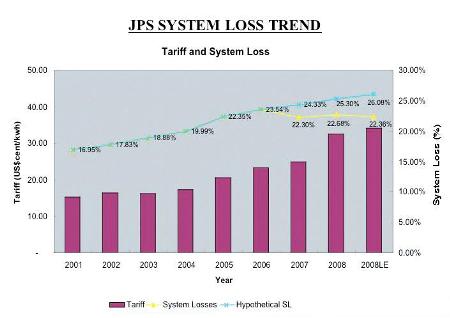 The reasons for focussing on this category was that it provides a manageable number of customers to work with, but the volume of energy sales from these large accounts is over 50%. In addition, historically approximately 10% of these accounts had been associated annually with tamper and other forms of irregularities.

JPS initiated regular auditing of these accounts and in these came across situations where customers were involved in the unauthorised abstraction of energy by different means. This led the company to thinking about real time auditing of installations and to the introduction of advanced metering infrastructure (AMI). Though developed countries like Italy, the United States, Canada, Australia, New Zealand, and the Netherlands have incorporated AMI meters in different forms in the utility sector, this was a very new metering concept in Jamaica. A very small pilot project of installation of AMI meters for C&I customers was initiated at the end of 2007. The first phase of the project was started in February 2008 and completed by April 2008. Today JPS has around 1,900 C&I customers with AMI meters.

THE INTRODUCTION OF ADVANCED METERING INFRASTRUCTURE
These AMI meters have a two-way communication facility giving the demand profile, consumption profile, reactive power (Varh), power factor as well as the power outage time with time stamp. The system was designed to get these data at 15 minutes intervals. The automatic meter reading facility of these AMI meters helps with the daily download of the meter readings remotely. The AMI metering system brought with it metering data acquisition and management (MDM) software to facilitate the data analysis, which turned the whole system into an intelligent one. This has enabled JPS to monitor all these C&I customers remotely. Any intervention into the metering system has become easily detectable, giving rise to greater optimism in deploying company resources for auditing the service installations of the C&I customers.

COMMUNICATIONS
The schematic of the AMI metering communication modality in JPS is shown in Figure 4. As the medium of communication the local cellular company’s wireless GPRS network is used, because of the discrete location of the large priority accounts throughout the island. Above all the AMI has not only helped JPS as an energy utility but has also helped customers in managing their demand and consumption.

Comparison shows that after the implementation of the AMI for the 1,900 C&I customers, an average increase in monthly energy sales of 2,000 MWh has been achieved. In quarter one of 2009 JPS will start the second phase of installation of AMI meters and it is planned to have 5,000 large account customers AMI metered by the end of the year.

The success of the AMI metering project has motivated JPS to think of the rollout of the same type of project for residential customers, especially in loss prone areas. The communication system in this case could be different. The system also would work in a different way for the residential customers as the plan would be to have up to 24 single-phase electronic meters with a remote disconnect/reconnect switch installed inside a cabinet with tamper-proof locking arrangement on the utility pole out of the reach of customers.

The customers’ meter readings and consumption would be transmitted via radio frequency (RF) or power line carrier (PLC) to a display unit installed inside the customers’ premises. The communication to these meters is done through micro-controlled units via communication modems such as PSTN, GPRS, RF or PLC. This system also gives the facility for two-way automatic communications for remote meter interrogation and reading. 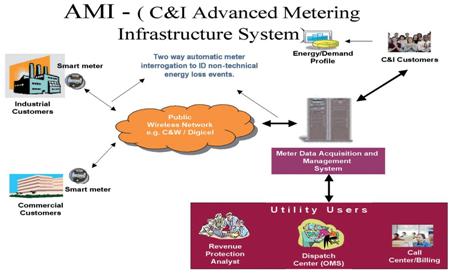 PILOT PROJECT 2009
At this stage JPS is awaiting Bureau of Standards approval of the system. Once the approval is obtained approval will need to be sought from the Regulatory Commission for introduction of the residential AMI meters. JPS plans to rollout a pilot project of 10,000 to 20,000 residential AMI meters during this year.