Automated meter reading has developed more slowly in the water sector than in the electricity sector. While the drivers to adopt AMR are similar – reducing labour costs, avoiding estimated bills, and demand management – and just as pressing, technical challenges have caused AMR to come to the market more slowly in water. But AMR technologies have reached beyond commercial and industrial customers and are becoming widespread in domestic installations.

There are three main technical hurdles that challenge designers of AMR systems for water meters – conditions, power, and communications. Water meters, like any pipes, cannot be exposed to freezing temperatures, so outdoor installations must be located underground in most climates. This leads to issues of moisture, flooding, and dirt that any AMR system must be durable enough to endure. In warm climates water meters can experience condensation that threatens electronic components.

Unlike AMR systems for electricity, water metering systems must bring their own power. Since water meters are often found outside the home in underground pits, AMR systems need to be designed with batteries for their power needs. For systems to be economical, these batteries must be able to reliably last at least five years.

The location of water meters also makes communications more difficult. Water AMR systems which rely on physical connections for communication, such as power line carrier (PLC) and phone lines, require the installation of a data cable underground back to the house to link into the communication network. While this has naturally pushed water AMR systems toward radio frequency (RF) solutions, these are most taxing on batteries.

Another technical issue which has affected the development of AMR systems for water is the expertise of water meter manufacturers themselves. Water metering technology has not, for the most part, changed much over the years. While electricity meters have evolved from electromechanical to solid state, the basic technologies for most water meters are unchanged, and meters are fundamentally mechanical devices. A water meter manufacturer’s primary areas of expertise – brass casting, precision machining, fluidics, and mechanical design – do not lend themselves to AMR system development, which is primarily a function of electronics and information technology. Electronics and water mix no better than oil and water, so the expertise of manufacturers is often divergent for water meters and AMR systems.

This has largely meant that AMR systems are add-ons to water meters offered by the manufacturer or a third party, rather than integrally designed into the meter. A register device must translate the mechanical turning of dials into an electronic signal. Even where an electronic output is integrated into the meter design, most meters simply have a pulse generator that can be read by an external device, though a few major manufacturers offer fully encoded meters. This situation is slowly changing – water meters for bulk measurement and large customers often use electromagnetic or ultrasonic measurement techniques, and one manufacturer of small customer meters, Severn Trent SmartMeter (Chesterfield, UK) is using an innovative fluidic oscillation measurement technique that is wholly electronic and has no mechanical or moving parts in the meter. Not surprisingly, manufacturers using electronic measurement techniques are paying more attention to designing meters with integrated AMR functionality.

RF systems are far and away the dominant trend in water AMR systems, especially in North America. These are split between fixed network and, more commonly, mobile receivers. Since battery power is an issue, fixed network systems generally conserve power by transmitting only when necessary, and mobile systems use a ‘wake-up’ function when a receiver is in the area. Mobile receivers allow a single meter reader to improve productivity from 300 meters per day to 20,000 or more, by simply driving past customer locations.

Like all water AMR systems, most RF solutions come from third party vendors and are compatible with a range of meters. One of the largest installations of AMR in a water utility is in Philadelphia in the United States, where AMR provider Itron (Spokane, USA) has installed more than 406,000 units to be read by mobile receivers. The same system is being installed for 220,000 customers in Denver. In one of the largest fixed-network deployments, Washington DC has just awarded a contract for the installation of 150,000 meters with AMR units from Hexagram Inc. (Cleveland, USA) and the same company is deploying 87,000 units in Boston. 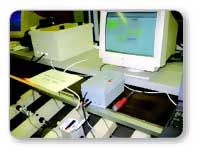 Induction pads or ‘touch pads’ are competing with RF as the most common form of water AMR. These low-cost pads allow a meter reader on foot to read a meter quickly without entering a house or opening the cover of a meter pit. The reader carries a handheld device which communicates with a pad through induction when placed in close proximity to the meter. These pads also eliminate the inaccuracy of a hand keying in or writing the meter reading. They are the standard form of installation in many jurisdictions, especially in the UK, where water metering is growing rapidly but regulators limit meter prices, which prevents more sophisticated AMR solutions.

While touch pads allow a meter reader to gather readings more quickly, they do not give the daily (or more frequent) readings of other AMR systems, so some of the benefits in demand management are reduced. Installations of optical reading technologies are not widespread, but they have similar advantages and disadvantages to touch pads. 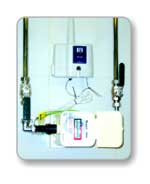 Power Line Carrier. While a number of power line carrier electricity meters integrate inputs for water meter data, such as Mainstalk from Ampy and Meterlink from Horstmann (both UK companies), there are few examples of widespread installations. Due to the cost efficiencies of a single communications protocol for two or more AMR systems in a customer’s premises, PLC integration is likely to be an area of growth in water AMR. It is especially useful for the combined electricity/water utilities that exist in many municipalities.

Telephone. Public Switched Telephone Network (PSTN) AMR systems are generally limited to large commercial and industrial users, like the installation of Sensus/Invensys (London, UK) meters for C&I customers in Monterry, Mexico. One of the few examples of installation of a telephone AMR system for domestic customers is at Boone, Iowa, where about 60% of their 5,000 customers are on the system, also provided by Sensus. While generally happy, public works director Larry Greene is planning to switch some installations with frequent turnover of occupancy to a simpler RF system, because changes in telephone numbers cause problems for the system.

Internet and Local Area Networks. As broadband Internet conductivity becomes more widespread, it is likely to emerge as a solution for water metering. Like PLC, the main challenge is the connection between the water meter and the communications gateway. Companies such as Coronis Systems (Montpellier, France) are developing advanced wireless technologies like Bluetooth that may help solve this issue. Such low power short range wireless technologies are equally applicable to the local area network between water and electricity meters to facilitate PLC solutions.

AMR systems must also respond to the economic realities of water. While reading water meters is often more difficult than reading electric meters, utilities have historically adapted to this problem by reducing billing frequency and making heavy use of estimated billing. With many utilities using quarterly or semi-annual billing, and even then estimating a portion of bills, the potential cost saving from AMR systems is not as great as it is for electricity metering. Furthermore, with typical per customer costs for water much lower than for electricity, utilities and their regulators are often hesitant to approve levies for AMR metering which represent a significant percentage of charges to the customer, even if the actual charge is small in absolute terms.

While cost saving is the primary advantage of AMR in Europe and North America, revenue protection and prevention of theft and corruption are major advantages of AMR systems in emerging market economies. Whatever the technology, AMR systems have a built-in audit trail that helps utilities prevent intentionally inaccurate reads, or meter readers ‘creating’ reads without visiting the site. In utilities where these are major issues, an investment in AMR systems can pay off to the bottom line. Fixed network systems, whether RF, PLC or any other, also have the advantage of being able to monitor tamper alarms and unusual con-sumption patterns on a real-time basis. This can help utilities that have problems with water theft.

A logical extension of AMR metering for utilities that have severe problems with revenue and collection is prepayment, or pay-as-you-go metering. Prepayment has many advantages, especially in developing countries where inadequate postal and banking systems mean cash payments. Like AMR, prepayment in water has trailed electricity, but there are a number of solutions available, such as those by market leader Conlog (Durban, South Africa) and installed by Severn Trent in Egypt.

AMR systems are finally hitting their stride in the water sector. With many large cities and small water systems making major investments in AMR, it is growing at a rapid pace. And as advances in AMR technologies continue, these systems will become cheaper and more reliable – and thus more attractive to utilities.