In Albuquerque we don’t have hurricanes, and blizzards only now and then; outages are rare and usually short lived, unless they involve one or more of the transmission lines that transport power from the coal plants in the Northwest corner of the state.

Most outages are caused by lightning or car accidents. A major outage caused by weather would be highly unusual in the Public Service Company of New Mexico’s (PNM’s) territory – very different from the experience of Florida Power and Light (FP&L) where the utility had to recover from three hurricanes within 44 days in late summer 2004. During the restoration, FP&L replaced 11,207 transformers, 13,506 poles, and over 1,700 miles of power lines. When FP&L and PNM evaluate AMR systems in terms of outage restoration and detection, the evaluation process should be very different for the two utilities.

To evaluate the potential benefits of AMR for outage management properly, a utility should document the most important outage ‘use’ cases. For FP&L, a key use case would be restoration after a major hurricane, while for PNM detecting small outages would take precedence. Another use case of interest might be to verify a possible outage reported by only one customer before sending a crew out for repairs. Inherent in the first two use cases is the ability to verify that power has been restored to all customers after the obvious problems have been rectified, such as repairing a main feeder line.

AMR providers have approached outage notification and restoration in different ways, depending on the topology of their networks. Some AMR systems provide direct outage notification by having the endpoint send a message indicating that an outage has occurred. Other systems infer an outage due to a loss of communication with the endpoint, or because the endpoint will not respond to a query from the AMR server. Each method has its advantages and disadvantages, but the method used will dictate how the utility works with the AMR system to achieve the outage management benefits.

In Table 1: Restoration Following a Major Hurricane, the value of the AMR contribution is highest after the crews have replaced the equipment identified by the Outage Management System (OMS) and the work crews. When the crews believe power should have been restored to a group of customers, the utility can use the AMR system to check the status of each meter included in the group. If some of the meters do not respond, it is assumed there are still problems associated with the distribution system due to the hurricane. The updated outage information obtained from the status check on the meters is fed into the OMS, and the crews will be provided with new guidance as to what field equipment might still be experiencing problems.

In theory this sounds very good, but there are glitches that can hamper utilities in gaining the value of this benefit. The first problem is really one of housekeeping. The AMR system needs to be checking on the status of the correct group of meters. If the meter numbers are not matched up correctly to the endpoints in the field, the AMR system may be checking the status of the wrong meters. The AMR database must be synchronised with the other utility databases (customer call centre, CRM, OMS, etc.) This is one of the functions utilities have found useful in AMR data management systems.

When working with AMR systems that poll the meters to check their status, a second problem is the need to carefully manage how many times a particular meter is pinged during the restoration effort. Some AMR endpoints do not take well to being pinged too many times in a short period. If pinged too often, the endpoint may not respond, and the work crew will be informed of an outage that is actually only an outage in terms of the AMR communications.

In some AMR systems, the meters send ‘power up’ messages when power is restored. This provides a positive indication that the power was restored to that meter for each of the messages successfully transmitted to the AMR server. However, some messages may not make it through if a large number of meters is restored at the same time. Some vendors have designed their systems so the ‘power up’ messages are staggered to mitigate this problem, but a utility should not automatically assume that the meter is still without power if a ‘power up’ message has not been received.

The key to using the AMR system with a large outage is to carefully set up the rules for processing the outage information, whether the process involves the endpoints initiating communication or the server requesting information on the status of each endpoint. Utilities have successfully used AMR systems to save as much as one dollar per customer per outage but a utility should expect to tweak the system to improve the results.

UtiliPoint’s definition of a small outage is one where only a few meters are involved, and the utility can not depend on customers to call it in. The advantages to the utility to discover the outage before the customers are many – less revenue loss, the potential to make repairs during normal work hours and in daylight, improved customer service and the possibility of preventing damage to customer property. Table 2 presents the benefits of using AMR to detect and respond to small outages.

The AMR system can do this in two ways: the endpoint could initiate a communication of an outage up the line, or the system can routinely poll for non-responsive meters, especially if the polling was directed toward areas where the utility suspects there might be an outage because of local weather conditions or an accident report. For example, a utility could poll for outages if a certain number of lightning strikes are recorded in a particular area. This requires a real-time feed of lightning data mapped to co-ordinates that the AMR data management system can match to meter locations.

If an outage is detected by an AMR system, it may not be at all clear at the outset whether the outage is localised or widespread. Another function of the AMR data management system is to pre-process outage notifications, and to determine how many to route to the outage management unit. This will likely change over the course of the outage. Utilities may wish to set up a sampling technique that is designed to help map the outage without providing unnecessary information. 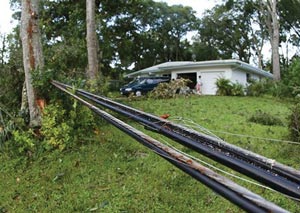 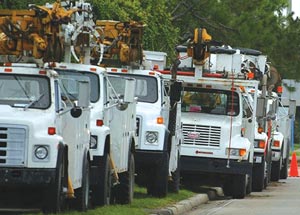 Electric company trucks line Spruce Creek Road Monday morning, August 16, 2004, as utilities crews from all over the Southeast flooded the area to help restore power knocked out by Hurricane Charley

Even though a utility may opt for a system where the endpoint provides notification in the event of a small outage, the utility has to plan for the avalanche of notifications that are created in response to an extensive outage. Some utilities just turn off the outage notification feed from the AMR system for the more extensive outages. Others have AMR data management systems that can be switched to ‘storm mode’, allowing only outage messages from high-priority customers through.

Of course, in order for the outage notifications to make it up the line to the central server for the AMR system, there must be a path on which the message can be relayed in the absence of power. This is easier to accomplish in some network topologies than others, and is less of a problem for very small outages – the more endpoints involved, the more likely a customer will call it in.

The last usage case we will consider is that of verifying an outage from a single customer call. Single endpoint outages can be aggravating for both customer and utility, especially if the customer is in a remote location. Customers may have to wait a long time for the utility to come, only to be told the outage is on their side of the meter. On the other hand, no one likes to be told it is their problem when in fact it is a problem with the distribution system.

Utilities with a lot of single outage reports would like to be able to determine before a crew is dispatched whether the problem is a utility problem. Table 3 details the steps where the AMR system could provide substantial savings to the utility.

If a utility had an AMR system that sent notifications of outages, the customer service representative (CSR) could check to see if such a notification had been received. If it had, that would provide proof positive that an outage on the utility side of the meter had occurred. If the AMR system did not show notification, the utility should still do a status check on the meter in case the outage notification was not relayed successfully up the line.

If the AMR system does not provide an automatic outage notification, the CSR could initiate a status check. Even in systems with frequent one-way communication with the meter, the utility can obtain a reasonable status on the meter based on whether the data collector had received communication at the last expected time. For example, some endpoints send meter reads every four seconds or every minute to the data collector. If the endpoint had received a communication from the meter within the last minute, that would provide reasonable assurance that there is power to the meter. If the meter missed the last few communications, a crew can be sent out to repair the possible outage. For systems with the ability to query all the way to the meter, the utility can determine whether the power is on or not if the query comes back fairly quickly.

The single outage report has provided utilities with significant savings, and even though some AMR systems may suggest that an outage is due to a communication failure, it is better to err on the side of the customer.