China’s total annual power generation is nearly 3 trillion kWh. With the estimated annual non-technical line losses of between 0.85 – 1% of the total generation, this equates to around 26 to 30 billion kWh or an annual direct loss of RMB20 billion Yuan (US$2.96 billion) equivalent to the total electricity generated by two large-scale power plants.

Assuming that this situation can be improved, 9.1 to 10 million tons of coal (1kWh=350g standard coal) could be saved with estimated reduction of around 24 to 28 million tons of CO2 emission. This could be a great contribution to the world in energy saving, to the environment, and to the profitability of the utilities.

MIC: We are aware that Chinese Power Utilities have taken many effective measures in anti-tampering, please briefly introduce the measures you have taken and main technologies you have applied.

Xuzhou Power: As it is understood that we met many difficulties in anti-tampering. Due to the fact that extensively distributed metering points, related to hundreds of thousands of households, the metering devices installed at the sites of consumers, these conditions make the tampering prevention very difficult. Additionally it is also difficult to quantify and verify the tampered electricity quantity because electricity is a special commodity, invisible and untouchable. As tampering and consumption happens simultaneously, it is difficult to confirm the time and length of tampering. Many large industrial customers tap directly prior to utility meters which defeats all the anti tampering features built into the meters. These factors make anti-tampering a very difficult detective work and inexact science. Based on the current technologies in domestic market, the main measures we have taken are as follows:

Special metering cabinet with lead sealing
This is the most commonly used sealing in China. As general lead sealing can be easily forged or renewed and more, it is hard to confirm the time length and amount tampered. A new kind of sealing, featuring anti-tampering, difficult to break, has emerged in the market, it improves tamper detection but is incapable of recording the event.

Active meter with anti-tampering functions
This is mainly used in single-phase meters with fewer functions.

Installed meters at higher position
It is difficult to tamper but it brings inconvenience for meter reading, maintenance and regular inspection.

Electronic type of sealing
Any illegal operation such as opening the metering cabinet will result in power off and recording the power-off time. This design increased the difficulties of tampering but interference might become frequent and lower the reliability of power supply.

Remote meter reading
Any abnormal power use can be detected by software calculating the power supplied and power consumed at the same time, any signs of tampering of the meter and wiring on secondary circuits are recorded. However, finding the location of tampering is difficult and it will be impossible to detect if the ratio of current transformer in the meter is tampered with or when the customer taps directly in front of the meter.

Installing Anti-Tampering System (ATS) from Sanneng
The Sanneng ATS system is specifically designed for real time monitoring of large industrial and commercial customers that own their own transformers. Any abnormal power use can be detected through real time comparison of data collected from primary side wireless CTs and secondary side. Real-time graphs, alerts and alarm will report if any tampering occurs. It is an innovative design and is the only system based on power use monitoring from primary side.

By comparing the above measures we have taken, the antitampering system produced by Sanneng is the most effective tool to prevent tampering, with unique features such as

Well publicized arrests and conviction lead to deterrence to would be thieves. Customers with Sanneng’s Anti-Tampering System installed showed an increase of 8% in revenue generation. This is a dramatic return on investment (ROI) in a matter of days.

MIC: It is known that the system you used for anti-tampering was supplied by Sanneng, and you had a satisfactory experience. Would please explain the main differences comparing with others, which you feel from a viewpoint as a user?

Xuzhou Power: It is a fact that industrial and commercial customers are the biggest power consumers occupying above 80% of the total consumption. Meanwhile, most tampering cases are from this big users, the impact on revenue recovery will be very high, therefore, we have focused to implement Sanneng’s ATS at highly suspected industry and commercial users. 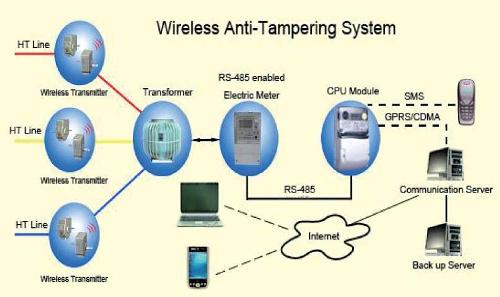 According to our experience, the system features an accurate and effective detection of any tampering by real-time monitoring and alarm. Traditional load control equipments and other antitampering systems are installed at secondary side and only create its load profile, which no primary side load profile to compare with.

In this system, wireless data collector is installed at highvoltage end of primary side in front of transformer while CPU module installed at second side so as to compare meter reading between secondary side and the wireless data collected at primary side. By real-time comparison of the data from these two groups, CPU module would report any abnormal conditions. This design will detect all real-time tampering at secondary side. Meanwhile, wireless data collectors are tamper resistant because they are installed at high voltage side, which leads to cost reduction in maintenance for power utilities. High Tension meter reading (S1) is adjusted for transformer inefficiency, acts as a baseline to compare to actual meter reading (S2) gathered through RS-485 bus. If the difference between S1 and S2 is greater than the user determined amount, alert and SMS will be issued through GPRS.

From the web based graphical interface, it is clearly seen that the actual reading from wireless data collector (S1 – red) is much higher than meter reading (S2 – blue) at certain hours of the day which means the customer selectively tamper during after hours. Quantity and time can be clearly identified in the graph.

MIC: Under the challenges of global energy shortage and economic crisis, electricity tampering is a social problem that directly affects efficiency and profitability of utility companies. What is Tianjin Power experience after installing ATS?

Tianjin Power: Let me firstly introduce a tampering case occurred in Tianjin region. A factory located at the south of the city, frequently tampered with electricity by using a remote switch buried in the wall to tap the mains wires ahead of the electric meter, thus circumventing it. From the second half of 2004, our supervision staff had started to monitor this customer, however we did not obtain any evidence even during numerous special inspections. In May 2006, we decided to install a trial ATS on the transformer of this customer. We quickly found that the load curve on this customer is abnormal by comparing and analysing the current curves between the high–voltage and low-voltage sides. In this case, we immediately dispatched our inspection staff together with a law enforcement officer to this customer and found the buried switch on site and collected evidences. This case resulted in a fine of 160,000RMB Yuan (US$23,529) with an estimated 320,000 kWh of total electricity stolen. 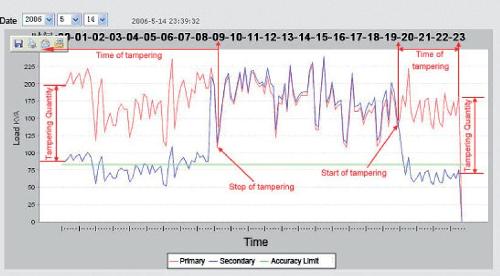 There were many such cases. Tianjin Power decided to install the Sanneng ATS monitoring system on many of the suspected sites. Most of them who are suspected of tampering were examined and captured with sufficient evidence. ATS allows inspection staffs to easily check whether the usage of power by the customers is normal or a tampering is happening. To those who tampered power, the system is able to record the length of tampering time and tampered amount to provide evidence in court. Furthermore, through numerous successful legal prosecutions and media publications, Tianjin Power estimates that there is significant reduction in tampering by suspected customers.

Tianjin Power has focused on strengthening its fight against tampering for several years by collaborating with the law enforcement department, focusing on strengthening the inspection of illegal electricity usage and installing modern anti tampering systems. In 2007, Tianjin Power found 1307 cases recovering 8.4 Million kWh and 14.9 million Yuan. In 2008, there were 1798 cases and recovered 13.32 Million Yuan. Tianjin Power has achieved great progress and success in reducing non-technical loss.

MIC: Given that Smart Grids is a global hot topic, do you expect that new requirements regarding anti-tampering would be included in the future system development?

Tianjin Power: Actually the so-called smart grid is a good summary of future grid development. That is to apply new technologies in the whole process of power generation, transmission, distribution and consumption, etc so as to optimise power consumption and realise energy conservation and emission reduction. Safety is the basis of smart grid and as I just mentioned that the objective is power resources optimization and energy conservation and emission reduction. These cannot be separated from anti-tampering measures.

In other words, smart grid has brought forward higher requirements for anti-tampering technologies. 24 hour monitoring and real-time alarms are the basic requirements for antitampering products, followed by the need to provide evidence and quantify loss amount. For future smart grid construction, antitampering technology should be an integral part of the distribution automation and be integrated seamlessly into AMR/AMI, monitoring system and load control management.

China utilities are still facing the tough challenges in its fight against tampering. Fortunately, with advancements in antitampering technologies, with products like ATS from Sanneng, have helped us to gain ground and get closer to this goal of smart grid. We’d like to work with the advanced technology providers to enable China to achieve its goal of more energy efficient initiatives.