For the first time, the DLMS User Association participated in an event outside Europe. This was justified by the growing interest in our activities from Asia and proved to be a great success. Asian Energy Week attracted many experts, and the DLMS UA profited by:

The DLMS UA booth attracted a lot of attention; interesting discussions took place and several new applications for membership were registered, pushing the number of members up to 80+. Paul Fuchs’ paper on DLMS/COSEM was given on behalf of the DLMS UA; it was entitled “Meeting New Challenges in AMR/AMM”. After the conference the DLMS/COSEM Training Seminar took place. This full-day seminar was organised by Synergy, and 12 participants from utilities, manufacturers and system providers took part, mainly from Asian countries. The training material, a PowerPoint presentation of 200+ slides with detailed comments, was distributed in the form of a booklet and also on CD, which makes it very suitable for later self-study. It is structured in form of six training packages:

The DLMS UA looks forward to the next event, Metering Europe 2006, which takes place in Copenhagen, Denmark from 10 – 12 October 2006. On 9 October there will be a pre-conference seminar on DLMS/COSEM, and the General Meeting of the DLMS UA will be held the same evening. 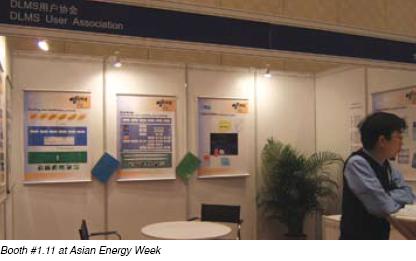