This article presents the main technological features of the frontier metering system deployed at Bandeirante Energia, as well as the internally developed system integration solutions. These systems enable passive collection by the energy data collection system and the inspection logic of the Chamber for the Commercialization of Electrical Energy (CCEE), in addition to meeting the company’s own demands, including billing, marketing, planning and operation.

Bandeirante’s frontier metering system was developed due to the need to segregate the amounts of energy consumed by the markets of Bandeirante Energia and Eletropaulo Metropolitana, both of which belong to Eletropaulo Services SA but were separated in the privatisation of the sector. This situation was consolidated by the normative resolution 281 of 1 October 1999, which defines the responsibilities of the distribution concessionaires regarding metering for billing at the cross-points between their systems and the core network.

From the beginning of the implementation to date, the frontier metering system has gone through several technological steps and has evolved from collection previously carried out by dial-up lines to a communication mix via cellular (GPRS) network, space technology, and Ethernet.

TECHNICAL ASPECTS
The telemetering system
The telemetering system, which is currently supplied by Landis+Gyr, is a compound telemetric gateway system (communication interface between the meter and the application), plus an application package with a web server as the main product. This system is used for the meter data collection of Bandeirante’s free market and large customers.

As shown in Figure 1, the gateway is connected to the meters. Each gateway can be connected to up to four meters by means of an optical port. Data transmission can be done by the Ethernet network, dial-up line, and the internal or external GSM/ GPRS modem (any media).

The telemetering system identifies the concentrator, translates the information received and puts it into a database. The system then makes this information available to users on a website so they can generate reports and graphs. The meters used at these cross-points comply with the Brazilian Norms 14519, 14520, and 14522.

Figure 1 – Architecture of the telemetering system

The Notus system
The Notus telemetering system, from Actaris, allows remote collection and analysis of the meter data, thereby facilitating the management and billing of consumption. To achieve this, a multi-user customer/server structure with simultaneous remote access to several metering points is used.

The Notus system also provides a powerful tool to analyse meter data, allowing the customer to evaluate the quality, consumption and demand profile, alarms, and power generation by means of graphs and reports. Data transmission may occur via the Ethernet network, a dial-up line, the GSM/GPRS modem, or by satellite. This system is used to collect the metering data at the core network cross-points.

The M2M system
The M2M communication system is via cellular internet developed by AdTS. The system is comprised of an SCC software routing program that runs on an exclusive server and the MCC equipment that allows remote communication with any device equipped with asynchronous serial communication by means of the CDMA/ 1XRTT or GSM/GPRS cellular network. This system is responsible for the interface between the Notus system and the meters, as well as for the logic inspection, as the CCEE accesses the SCC server through a VPN LAN to LAN to directly address the meters.

TELEMETERING EQUIPMENT
Meters
Several types of meters are used to meter the cross-points of the networks and directly collected by the Notus system, all of which comply with the technical requirements specified by Brazil’s national system operator (Operador Nacional do Sistema Elétrico, ONS).

All the meters mentioned above are equipped with two serial communication ports. One is used to communicate with the UCM and the other is used by the CCEE for logical inspection.

COMMUNICATIONS EQUIPMENT
Gateway CD-103
The ABNT meters communicate with the telemetering system by means of a communication gateway. The CD103 gateway is an interface with a modem incorporated for telemetering of up to four electronic meters via the internet. It uses an Ethernet IP network connection and, optionally, a dial-up line, cellular GPRS, or 1XRTT. It is equipped with two sensing inputs and two alarm outputs.

The gateways come with programming software so that the data transmission period may be defined. According to the needs of the customer, data transfer may take place every 15 minutes, once an hour, or once a day.

Data transmission from the meter to the telemetering application is extremely secure. A cryptographic system with point to point validation is used, which protects the data transmitted by the network from being visualised by unauthorised users.

Cellular communication module (MCC)
The MCC is an M2M system hardware module used to exchange data between different pieces of equipment in a transparent way. It manages the TCP/IP communication between the meters and the collection software program and solves issues such as IP addressing and connection management. This device is installed next to the meter used to communicate and is connected to a serial port by means of RS-232C or RS-485 interface. 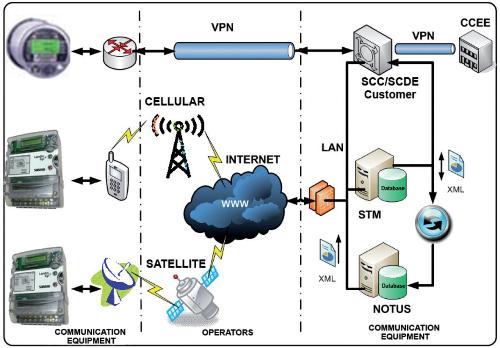 Another reason to retain the ABNT standard is the relatively low cost of those devices when compared to the other meters that meet the ONS requirements.

As mentioned previously, Notus collects the metering data of the core network cross-points. Its database is fed with free market customer data by means of a customised software program also developed by Actaris. That tool, called NotusImp, feeds the database with the same XML files generated to meet the SCDE demand (in this case, the archive files of the telemetering system). Thus, the closing of Bandeirante’s charge accounts may be carried out using the Notus database, in which data are consolidated by means of system supervision tools, such as the Notus Advisor used to generate alarms based on the variations in demand values, energy values, inversion of active energy flow and the comparison between the main meter and its back-end. Metering files may be generated in XLS, TXT, ABNT public, and XML formats, as well as displayed in graphs by means of the workstation tool.

XMLs files from the core network cross-points are generated by Notus and made available for collection by customers.

A detailed overview of Bandeirante’s frontier metering system is shown in Figure 2.

The topology, which today counts 362 telemetering meters, all compliant with the regulatory requirement that prescribes their maintenance after a 5-year period of information supply to database, forced the metering and IT sectors to redimension all the servers involved in telemetering to mirror the expansion of the system and the continuing growth of the database. Since those servers need to be continuously available, an outsourced provider was contracted to perform database backup procedures and ensure a 24×7 service. Another need that had to be met was the involvement of the telecommunication area in cellular modem and satellite communication point management. The IT infrastructure that was deployed for the system is shown in Figure 3. 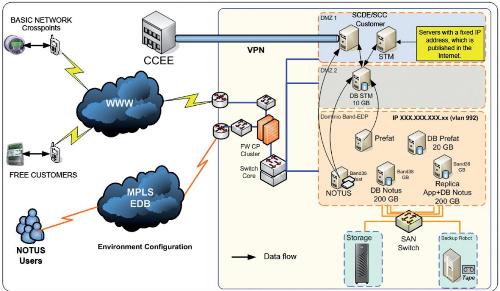 Figure 3 – Schematic of the IT infrastructure

CONCLUSIONS
The deployment of frontier metering systems at Bandeirante has required setting up multidisciplinary teams, resulting in a range of benefits for the professionals involved, due mainly to the exchange of know-how between the areas of metering, IT and telecommunications.

Other advantages become apparent when using the metering data, not only to comply with all the regulatory demands, but also to meet the needs of internal areas, such as billing, marketing, planning and operation.