The GBA was established some years ago to focus on telecoms, and the effects of deregulation and competition on the billing environment. Today we have more of a multi-utility focus. Competition has happened or is happening to every industry that was regulated, and there is much that can be learned from those who have already gone through the process.

In telecoms, the advent of competition meant launching services fast. This meant having a system up and running quickly that could bill the service. In most telecoms companies it was expedient to buy a new billing system every time a major new service was launched. The service could be launched quickly, but it also meant one new system to integrate, maintain, train, and probably customise. At least it meant that the impact on other systems was never an issue.

Except that now the major issue for most telecoms companies is consolidation; the objective is to reduce the number of systems from dozens, and in some cases well over a hundred, to close to one. Most companies believe that having one system is actually a pipe dream, but a large, complex telecoms company will be trying for about seven. Some believe that one system, but several implementations and customisations of that system, is the way forward.

Having multiple systems meant a fragmented view of the customer in the telecoms world (you never knew whether an unprofitable Internet customer was actually your most valuable mobile customer, and you still don’t). Energy utility companies looking forward to competition, or beginning to grapple with it, are trying to ‘see beyond the front door’. They are trying to understand the family that lives behind that door – but for the most part it has remained closed.

So CRM issues are common to both worlds. I hate the term CRM – it has become so ‘fuzzy’ that it is almost impossible to define where responsibilities inside the organisation start and finish. In telecoms, for example, billing does not necessarily report to customer service; in fact it seldom does, falling under either finance or IT for the most part. In the worlds of energy and water, though, you have got it right and billing is seen as part of the customer service area.

What can energy utilities learn from the telecoms industry? Would it not be interesting to know how long, on average, it takes a telecoms company to distribute invoices after the billing cut off date, or how long it takes to reconcile 98% of unallocated money, or what percentage of bad debt a telecoms company writes off, or how many are implementing e-billing solutions, and what the take up is, or which function within the business is the major ‘root cause’ of billing errors? And how this changes over time?

I think it would be fascinating, and I think telecom companies have a lot they can learn from energy companies too. Telecoms companies are entering the world of reduced margins, of tighter control; and being able to measure how good, or bad, they are at these things. Being able to learn from other industries would be very valuable. 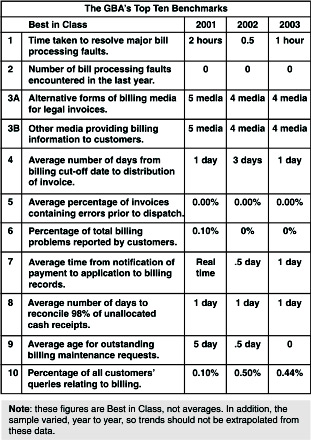 The GBA has been involved in benchmarking for over three years. We act as a facilitator, a trusted third party, for an annual study that so far has concentrated on the telecoms world. We could expand this to include energy utilities. While there are areas where the differences in the business and the culture would be too difficult or irrelevant to measure, such as organisational structure, others are definitely worth exploring.

My challenge to you, in the worlds of energy and water, is this: let us measure some key processes, perhaps starting with a few simple, easy-to-define key performance indicators. Let us see how different, or similar, they are between the industries – and learn from each other.

Someone who used to run a call centre for MCI once said: “We never benchmark against other telecoms companies; the increases in efficiency, or the reductions in cost that you can achieve are only incremental. We benchmark against other industries – that is where you can achieve meaningful leaps in productivity and efficiency.”
I challenge you to help me prove him right.