One of the strengths of DLMS/COSEM is the simple fact that it is widely recognised as an international standard for meter data exchange.

In promoting DLMS/COSEM for various applications, cooperation between the DLMS UA and international standardisation organisations has always played an important role. To facilitate this, the DLMS UA has established a formal liaison with IEC TC 13 WG 14, and has asked for formal recognition by the IEC as the registration authority for the IEC 62056 series of standards.

In Sweden, a country in the forefront of market liberalisation, the latest regulations require that meters of residential customers with direct connection of <80A be read once a month from July 2009. This means that more than 5 million meters have to be remotely read.

It is clear to the Swedish experts that AMR on such a scale must be based on international standards. IEC 62056 – DLMS/COSEM has been identified as an obvious candidate, although it is seen by some people as a complicated standard tailored to high-end industrial applications, due to its wide scope and flexibility. Through the Swedish member of IEC TC 13 WG 14, the experts asked for help to investigate how DLMS/COSEM could be used for simple residential applications. 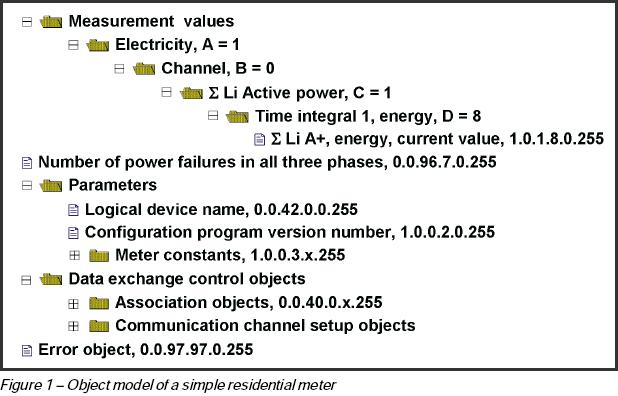 Based on a draft requirements specification, the object model of a simple residential meter has been developed in co-operation with the Swedish experts, IEC TC 13 WG14 and the DLMS UA. Figure 1 shows how it supports active energy metering, power failure monitoring, diagnostics, parametrisation and remote data exchange.

The model was presented at the European Utilities Intelligent Metering conference in Stockholm in April 2005. A team of Swedish experts is now studying it, together with protocol aspects. If a request for a more ‘lean’ version arises, this may lead to an IEC New Work Item Proposal for the development of a companion specification to the current IEC 62056 standards to cover the special needs of residential AMR.