In the Middle East, the Dubai Water and Electricity Authority (DEWA) received its first electric charge stations. A local news sources reports that DEWA plans to deploy 100 EV charging stations across the Emirate by April this year.

The Dubai government are in discussions with Renault Middle East regarding the launch of the recharge stations, legal requirements, technical specifications, as well as suppliers of the charging stations. Renault has tested its “Zoe” and “Twizy” electric vehicles in the UAE over the last 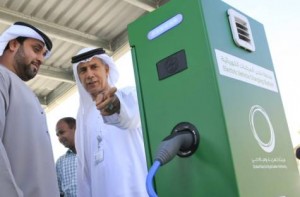 The utility had in 2014, conducted a pilot project with real estate developer, Tecom Investments to develop and invest in EV charging infrastructure, smart meters and smart grids which it implemented in Dubai’s Design District.

In other DEWA news, the utility had reported transmission and distribution were down 3.5% in just two months after linking 120, 000 smart meters to its network. Also in February, DEWA opened up a complex with new transmission and distribution control centers and also has commenced work on a Supervisory Control and Data Acquisition (SCADA) system for Dubai’s main water network. Continued investment in its service delivery infrastructure is helping to realise the government’s smart city vision.

At the recent World Future Energy Summit, head of the Dubai Electricity and Water Authority (DEWA), Saeed Mohammed Al Tayer, stated that the Emirate would increase its renewable energy goal from the current 5% to 15% by 2030, in a bid to secure the future of energy and “sustainability” in the region.