At Endesa over the last decade the traditional metering activities have become highly efficient. For high voltage industrial metering, automatic meter reading (AMR) has been fully deployed. For the low voltage segment, static meters have been introduced and all meter reads and meter-related work orders are fully outsourced to service companies. Every two months, all domestic meters are read and the consumption is billed to the customers.

At the same time, the quality of the metering activities has been pushed to extremely high levels, demonstrated by the fact that in a year Endesa achieved 98.5% real meters readings and that the percentage of meter reading claims was below 0.06%. Now the point has been reached where new functionalities and additional efficiency can be achieved only through further introduction of technology. 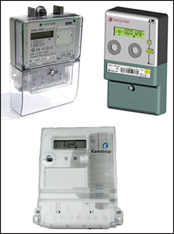 Endesa’s continuous and rigorous process of introducing new technologies has led to the implementation of mobile workforce management, use of GPS coordinates and cartography, web front-ends to the management system for giving contractors access to Endesa’s commercial systems, and integration of the company’s back-end systems. The next step is the development and introduction of automatic metering into the customer segment with contracted maximum power below 15 kW.

For this segment, which in Spain alone consists of more than 11 million customers, the automatic metering solution must naturally provide remote meter reading, but also a very rich set of additional functionalities in order to become economically viable. In a first step, the main functions for Endesa’s AMM system are automatic meter reading, control of the contracted and demanded power, flexible remote change of tariffs and periods, remote connect and disconnect, contract programming and contract termination, as well as local operation via a handheld device, and alarms for proper functioning, failure and fraud detection.

These key functions must be implemented in a gradual,scalable, economic, robust and safe process. In a second step, other possible future functions might be incorporated, such as selective load curves, the capability to reduce the maximum power, retrieval of information on the state of the electrical grid, flexible billing capability, reading of gas and water meters, etc. For the specific case of Endesa, narrow band powerline communications (PLC) was considered the optimum communications solution, due to its lower cost per customer in higher density areas, lower installation costs, and complexity and independence of telecommunications providers.

In this architecture, the meters communicate via the low voltage powerlines to a concentrator unit installed in the MV-LV transformer station, which connects to the central systems via wide-area communications such as GPRS, DSL, VSAT or fibre. Both for robustness of the system and for optimisation of the economics, the system is designed in such a manner that the actual meters, being the high volume element, are kept as simple as possible, whereas the other elements, mainly concentrators and the operation and management systems, implement the intelligence of the system. In addition, the AMM system has to compete with the highly cost effective traditional operation.

For this reason, the system has been designed to permit local, semi-automatic operation with handheld devices and without the need for installation and operation of an expensive communication infrastructure and concentrators. In this scenario, field workforces exploit all AMM functionality locally, i.e. they read and operate the new meters by connecting their handheld field devices to the meter’s optical port or via PLC. This type of operation will most likely coexist with the full remote AMM operation, since it has the advantage that by simply replacing the meter with an AMM-capable meter, most of the new benefits are available, and the cost of the full infrastructure can be deferred over the time of several implementation phases, thus allowing the optimisation of the economics.

In order to achieve these requirements, the meters must be decoupled from the concentrators by a clear protocol specification and must allow for semi-automatic operation. Also, the meters must be unified for full interoperability and independence of one or various specific suppliers. Endesa’s vision of the AMM meter is a plug-and-play element that provides full and identical automatic metering functionality independent of the meter manufacturer, in a similar manner as the traditional electromechanical meter is a totally interchangeable multi-vendor element. However, this form of operation requires full and detailed functional and technical specifications of the meter, the PLC communications and all protocols.

One of the major differences of Endesa’s system, when compared to other utilities’ approaches to AMM, is that of driving the unification and standardisation of the system down to the meter, whereas others have purchased one or more proprietary solutions for AMM subsystems consisting typically of the meters, communications and concentrators, and built the necessary interfaces and data exchange protocols to unify these subsystems at a much higher level.

For Endesa, the approach of standardisation of the meter and communications is the only possible way of achieving an efficient, future-proof and durable solution. However, until today, there have been no such standard solutions commercially available that comply with all the requirements. For this reason, Endesa created a project group at the end of 2004, which is directed by Endesa Distribución in strong collaboration with Endesa Ingeniería and Endesa Servicios, respectively the group’s engineering and IT and telco subsidiaries.

Today the AMM project incorporates more than 80 internal project members, with a dedication that is equivalent to over 70 collaborators at full-time. The project is organised in seven internal working groups and counts on the collaboration of various universities, and a number of leading meter, concentrator and chip manufacturers as well as software factories. During the years 2005 and 2006, small field pilots with existing commercial solutions were carried out.

A detailed requirement analysis has been performed and full specifications of the final system and its elements have been elaborated. For the meter, full and detailed technical and functional specifications for the single phase and the three phase meter, as well as the visualisation codes, have been defined in collaboration with a group of industry-leading meter manufacturers: Actaris, Ampy, Circutor, Elster, Iskraemeco, Kamstrup, Landis&Gyr, Orbis and Osaki. This specification for interoperable meters, which is defined to fulfil Endesa’s requirements, is currently being implemented by all of these suppliers. Figure 1 shows the first laboratory prototypes of some of these meters.

Some of the most important characteristics of these new AMM meters are: energy registry in all four quadrants, permits up to nine periods (multi-tariff), programmable remotely and locally (via handheld device), incorporates an omnipolar cut-off element, allows communication with a reinstatement module inside the client’s home, includes maximum demand meter, authentication of device and user, encryption, remote firmware download and register alarms.

The display and its visualisation codes have also been specified in detail to allow for unified operation. The meters communicate with the concentrators via narrow band PLC. For this communication, Endesa has selected Yitran’s DCSK modulation technology and worked together with Renesas to define and specify the network and application layer protocols and functionality of the PLC modems.

Yitran pursues the objective of totally opening its baseline technology, which was also selected by the HomePlug alliance for its Command and Control specification and the home automation and control standard issued by the Japanese ECHONET consortium. Based on this advanced physical and data link layer technology, Endesa together with Renesas adapted to its particular requirements a unique communications protocol, based around Renesas’ RUN-M network layer protocol.

This adaptation tackles specifically all the scenarios that are typical for a utility company, such as topological changes, intelligent routing, the presence of multiple concentrators in certain parts of the network, operation via handheld devices, etc. Both Renesas and Yitran will supply compatible chips that comply with the specification for Endesa’s system (Figure 2). Furthermore, Endesa’s clear intention is to provide the meter suppliers with the full specification of the PLC communication, so that they have the freedom to implement it themselves if needed.

The concentrator designed within the project not only performs the function of simple data routing, but is rather an intelligent and integral component of the system’s architecture. It manages all meters that are assigned to it, programmes all actions, configurations and operations of the meters, and collects the consumption data and alarms from the meters. In addition, it is designed to allow for dynamic changes of the power grid’s topology and can work with different types of wide area network communications.

Its software architecture is based on a modular concept divided into control and business functions, which can be updated independently and remotely. The concentrator software, which has been designed by Endesa Servicios, is fully based on modern open software and standards. The hardware of the concentrators, which is specified in detail, will be provided by several equipment suppliers, whereas the software is proprietary to Endesa and is being developed entirely by Endesa and its usual software factories. Similarly, the central system software is also being designed and developed internally at Endesa in order to perfectly interface with the existing commercial and operation systems.

For the present year 2007, Endesa will perform rigorous laboratory tests of the different interoperable meters, communication devices, concentrators and system software, and roll-out a pilot test with 10,000 meters and about 120 concentrators in all of the regions where it distributes energy in Spain. This pilot is designed to perform final system fixes and to confirm the technical and economical feasibility of the AMM system. This final phase of the development of the system will then allow us to plan and validate the future mass roll-out. In summary, as a utility Endesa has discovered that existing AMM solutions do not fulfil its technical, operational and economic requirements.

For this reason, Endesa started an ambitious project with major internal involvement in order to define in detail new specifications for an interoperable multi-vendor system at the meter level that will allow future implementation of automatic metering in the domestic customer segment