It could be said that consumers’ acceptance of new electrical products drove the need for the electric meter and its development. A fundamental issue at the time was how to charge for electricity, and also what the quantity being charged for should be called. This resulted in the rapid development of electricity metering technology through the end of the 19th century. Meters began evolving quickly, from Edison’s electrochemical meter to Aron’s pendulum meter to Blathy’s induction meter to Shallenberger’s integration watthour meter, and others too numerous to mention. 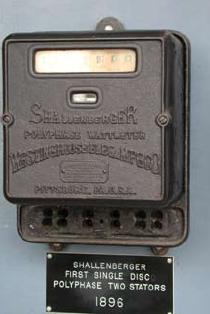 THE EVOLUTION OF ELECTRIC METERING

Many of the early meters made heavy use of gold and other precious metals. In the early 20th century, many improvements to electrical meters came about as they continued to evolve into the electromechanical meters we know today. The round socket mounted electromechanical meter became the standard metering device in the US for much of the 20th century, because it was easy to install, was affordable, could be certified periodically and it enabled electricity producers to handle the escalating use of electricity easily. By the 1970s the availability of integrated circuits and communication technologies brought about the development of electronic meters – a precursor of today’s more sophisticated metering technologies that are often referred to as smart or advanced meters. Obviously metering technology has come a long way over the last 100 plus years. Even today, ideas that we regard as new and innovative are continually evolving, as smart metering technology empowers utilities to set new standards in metering and customer service.

WHAT THE FUTURE HOLDS

The one given in envisioning the meter of the future is that the meter as we know it today will change drastically. There is a good possibility that the meter shapes and hardware used today will not be used in the future. Additionally, the functionality of meters in the future will completely change. They will become what we might think of as an information node, or a home or business interface device that will provide much more information to consumers beyond monthly electrical usage. The information we should expect to see from the meter of the future will allow consumers to more fully participate in and manage their energy use in the comfort and security of their own homes and businesses.

The device will have communications available that will allow consumers to interact with the utility both locally and remotely, and will give them more control over their home or business usage through the information they receive. It will enable the consumer to receive information about what kinds of rates they will be paying, and the quality of the electrical power they are receiving. As we move into the future we will become a more microprocessor-based society, and the quality of the electricity that utilities deliver to their customers will therefore become very important.

Because of this, we can expect utilities in the future to design rates around the quality of the power they are delivering, and the metering device of the future will enable the consumer to determine if the utility is delivering adequate power quality. The location of the device will also change drastically. In the US it will no longer be located in a socket on the side of the house, but rather located inside the house. Internationally, we can also expect meters to be located inside the house in an accessible place. The meter of the future will be a device that is integrated within its service location’s electrical system, and it will be distributive in nature. By this I mean that it will no longer be a stand-alone measurement device, but rather part of an integrated system that measures power consumption and provides information directly to the consumer. The consumer will have direct access to the meter display within the home – similar to a thermostat, home alarm, or computer terminal – while the actual power measurement device is integrated into the building’s electrical system and protective devices.

GOING BEYOND A kWh MEASUREMENT DEVICE

Since the meter of the future will be more accessible to consumers, the trends we see with consumer products will also change. The meter of the future will primarily be radio frequency (RF) based, because this technology is so prevalent around the world and is already used in many modern consumer products today. The consumer interface device or information node will be aesthetically pleasing, because it will be designed to be a part of the consumer’s home. There will be less emphasis on displaying only kWh information. Instead, the display will provide a wealth of core information that will enable consumers to more effectively manage their energy usage and costs.

In the future, we can expect to see a trend where kWh will no longer be relevant to consumers in managing their energy consumption. The information future consumers will be looking for will be about dollars – time-of-use (TOU) dollars, and real-time pricing (RTP) dollars – and will give the consumer control and options to make informed decisions based on cost rather than consumption quantities. Since the consumer interface device will be an information node within the home or business that is also a distributed component within an integral metering system, we can envision that it will also include information on the consumer’s water and gas usage. It is also possible that this central information node could include additional services use, such as sewer, cable and telephone. It will become a microprocessor-based or computer device readily available to consumers, allowing them to manage multiple services within the home or business. 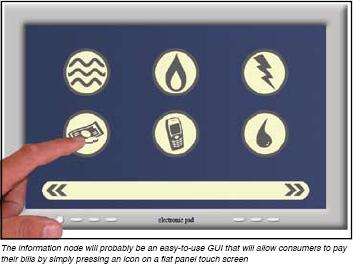 It will enable consumers to better manage their electrical consumption – much like businesses already do, but in a much more sophisticated way. If the information device is set up with the consumer’s budget for electrical usage, it could control a consumer’s energy usage. It could provide real-time information to consumers, such as the need to reduce lighting consumption by a certain percentage, or indicate which appliances they can use or must turn off, or how they should adjust their thermostats. With a central information node, the meter of the future will most likely allow consumers to pay their bills directly from the consumer interface device. The information node will probably be an easy-to-use graphical user interface (GUI) that will allow consumers to pay their bills by simply pressing an icon on a flat panel touch screen to release funds from their banking account or other financial institution to the utility.

In the next ten years there will be more competition within the electric industry. This competition will not be between utilities companies, but rather between other energy sources and technologies available to the consumer. Over the last decade I have seen a major paradigm shift in how service-oriented companies are modelling their business cases. Business leaders are realising that it has become critical for them to deliver the products and services their customers demand. They must know their customers and know what services they desire. They must give their customers the information they need to make informed decisions. Technology is no longer only advancing in nations we might consider ‘industrialised’; it is advancing on a global scale. Just as the early innovators in the 1800s reached various milestones in the development of the first commercially viable electric meter, the accomplishments we have achieved in electricity metering today and the technology we have to work with are just milestones of what that technology can bring to electricity metering in the future.