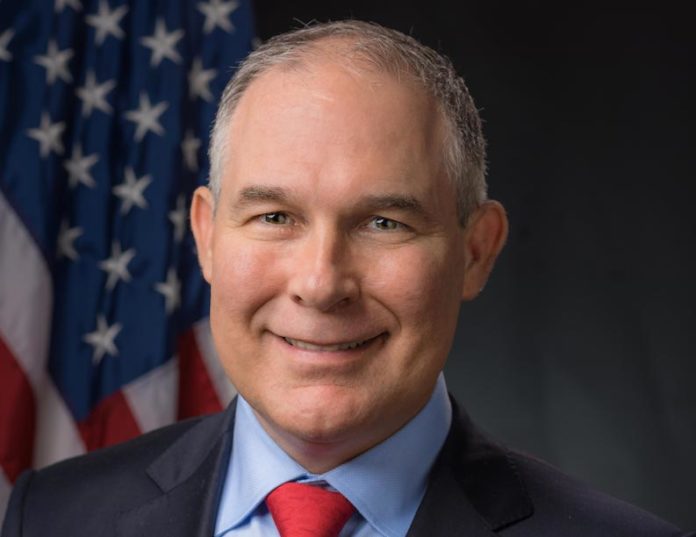 According to the Trump administration, Scott Pruitt, administrator of the Environmental Protection Agency (EPA), has resigned from the environmental regulatory agency.

In a tweet this evening [5 July], president Trump announced:  “I have accepted the resignation of Scott Pruitt as the Administrator of the Environmental Protection Agency. Within the Agency Scott has done an outstanding job, and I will always be thankful to him for this. The Senate confirmed Deputy at EPA, Andrew Wheeler, will on Monday assume duties as the acting Administrator of the EPA. I have no doubt that Andy will continue on with our great and lasting EPA agenda. We have made tremendous progress and the future of the EPA is very bright!”

Despite his concerns, Wheeler is best known for his effectiveness in forwarding a coal-focused agenda, with Senator Edward Markey, remarking in April this year: “Andrew Wheeler’s coal credentials are without equal. He is, without question, a member of the coal industry’s Hall of Fame.”

“Sadly, I am concerned that Andrew Wheeler’s background means that he will never understand that saving coal is not the job of the EPA. It is the EPA’s job to regulate coal to protect public health and the environment.”

Pruitt’s tenure at the agency has been plagued with rumours of unethical behaviour, secret calendars, sweetheart financial deals and excessive spending. According to a spokesperson for the EPA’s Office of Inspector General: “Any ongoing or pending OIG reviews related to the Administrator and/or his team will continue—regardless of the Administrator’s resignation.”

Pruitt stated in a resignation letter that has been made public: “It is extremely difficult for me to cease serving you in this role first because I count it a blessing to be serving you in any capacity, but also, because of the transformative work that is occurring.”

“However, the unrelenting attacks on me personally, my family, are unprecedented and have taken a sizable toll on all of us.”

He continued: “My desire in service to you has always been to bless you as you make important decisions for the American people. I believe you are serving as President today because of God’s providence. I believe that same providence brought me into your service. I pray as I have served you that I have blessed you and enabled you to effectively lead the American people.”

Legacy of a climate-change doubter

Pruitt’s departure has been reported as good news by pro-environmental groups. Fox News reports that Kieran Suckling, executive director of the Center for Biological Diversity said of Pruitt: “Despite his brief tenure, Pruitt was the worst EPA chief in history. His corruption was his downfall, but his pro-polluter policies will have our kids breathing dirtier air long after his many scandals are forgotten.”
Pruitt, who was once Oklahoma’s attorney general, repeatedly sued the EPA in a challenge to the agency’s climate change policies during the Obama administration. According to CNN, he described himself in his biography for that job as “a leading advocate against the EPA’s activist agenda.”
During his time at the EPA, Pruitt actively oversaw efforts to change or roll back major climate change regulation, announcing in October 2017 the withdrawal of the Obama Clean Power Plan which aimed to limited greenhouse gas emissions across states.
Responding to his resignation, Citizens for Responsibility and Ethics in Washington, issued the following statement:
“Good.”