The global electric vehicle (EV) market is experiencing robust early growth, but large scale market penetration still has a long way to go. That is the conclusion of the Global EV Outlook, a new report from the Electric Vehicles Initiative (EVI) released at the fourth Clean Energy Ministerial in New Delhi on April 17, 2013. The report highlights the EV deployment efforts of EVI’s 15 member countries, which together accounted for over 90% of global EV passenger car stock in 2012.

EVI is a multi-government policy forum dedicated to accelerating the introduction and adoption of electric vehicles worldwide. It is one of several initiatives launched in 2010 under the Clean Energy Ministerial, a high level dialogue among energy ministers from the world’s major economies. EVI currently includes governments from a variety of significant markets including China, India, Japan, and the United States. It also includes participation from the International Energy Agency (IEA). EVI consists of many of the most pioneering countries in electrification and thus represents a useful barometer for global EV progress. The group’s ambition is to put 20 million passenger car EVs on the road worldwide by 2020, based in part on targets established by member governments and IEA scenarios. This equates to approximately 6 million sales per year by 2020. (EVs are defined as passenger car plug-in hybrid electric vehicles, battery-electric vehicles, and fuel cell electric vehicles.)

The Global EV Outlook finds that global EV sales more than doubled between 2011 and 2012, exceeding the 100,000 sales milestone last year. World EV stock now stands at over 180,000 vehicles. However, this represents only 0.02% of total passenger car stock, underscoring the distance that vehicle electrification still has to go. In order to meet the 20 million by 2020 goal, the EV market would need to achieve about 72% compound annual growth from 2011 levels. Meeting this target of course becomes more of a challenge each year, but one-year growth so far is ahead of the curve in light of the more than doubling of the market. Other indicators also show market momentum and relatively high consumer interest. For instance, trends reveal that three recently released EV models have sales above where the Toyota Prius hybrid was at a corresponding time after its market launch. For this momentum to continue, however, the market needs to traverse the so-called “valley of death” from a niche market to widespread adoption.

At present, the largest contributor to EV deployment is the United States, which alone accounted for approximately 38% of world EV stock at the end of 2012. US EV sales tripled from 2011 to 2012, driven mainly by sales in California, while sales through the first quarter of 2013 are 84% higher than at the same time a year ago. Plug-in hybrid electric vehicles (PHEVs) seem to be favoured in the US market, with 70% of world PHEV sales occurring there in 2012. Japan is also an early market leader, particularly with respect to battery electric vehicles (BEVs) like the Nissan LEAF and the Mitsubishi i-Miev, which helped the country capture 28% of world BEV sales in 2012.

Together EVI countries have deployed about 47,000 slow and 1,900 fast non-residential charging points through 2012, and their governments have spent approximately $800 million on infrastructure deployment since 2008. Of course, the absolute number of public chargers is not the sole driver of EV development; and more EV charging points are not necessarily better. EVI data show that ratios of public slow and fast chargers to EVs are declining or leveling off, suggesting that vehicle deployment is outpacing non-residential charging without much hindrance.

RESEARCH, DEVELOPMENT AND DEMONSTRATION
In the crucial areas of research, development and demonstration (RD&D), EVI member governments have already made substantial and consequential investments in vehicle electrification, with $8.7 billion in collective spending since 2008. These efforts have helped reduce battery development costs by more than 50% in the last five years. Much of this investment was the result of economic stimulus efforts from a number of countries in 2009 in response to the global financial crisis. Encouragingly, public investment in RD&D after 2009 remained at a high level, which signals continuing commitment to EV innovation. Large scale demonstration programs also received significant funding, reflecting the desire of governments to monitor and learn from initial vehicle and infrastructure deployment.

Additional government support on the demand side is also contributing to rising market penetration. Twelve out of 15 EVI countries offer financial support for vehicle purchases, and most employ a mix of financial and non-financial incentives (such as access to restricted highway lanes) to help drive adoption. While national governments are focusing most of their spending on RD&D and consumer fiscal incentives (like tax credits or rebates), city governments and the private sector are supporting infrastructure deployment locally through public-private partnerships and other programs. 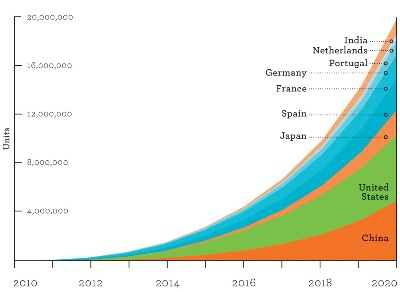 These challenges are complex and will require a broad and coordinated effort among all relevant public and private stakeholders to address them. The Global EV Outlook presents an opportunity matrix that outlines several opportunities for governments and industry to accelerate the global scale-up of electric vehicles. It also identifies which sectors are best suited to take the lead in the areas of technology, finance, market, and policy. EVI is helping to address these challenges through an ongoing policy dialogue among its member governments as well as robust private sector engagement.

To address high upfront vehicle costs, government funding for research and development can help achieve long term cost parity without the need for purchase subsidies. Improvements in battery pack energy density, operating temperature range, and cycle life will all be important innovations that further reduce cost and increase range and battery life. In the meantime, attractive vehicle financing can buoy sales, particularly as government purchase subsidies begin to phase out. There is some evidence that competitive lease rates have already helped to bolster EV sales. 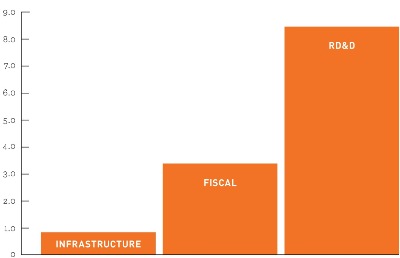 There is also a market need to identify and employ sustainable business models to best match charging infrastructure supply and demand, especially in public locations. More importantly, deployment of electric vehicle supply equipment (EVSE) needs to be optimized rather than maximized. Public-private cost sharing can catalyze initial infrastructure deployment, while governments can provide clarity on how EVSE service providers will be regulated.

Workplace charging fills an important gap between residential and public infrastructure and employers should consider providing access to EVSE as an attractive employee benefit. Car sharing is proving a natural fit with EVs since it allows drivers to reap the benefits of electrified transport without having to face the higher upfront cost. It also allows for greater familiarization with EV technology, which can better inform potential vehicle purchases. Car sharing is already taking root in many American and European cities and has the potential to become a major market by 2020.

Signage for charging infrastructure is an often overlooked area of need. Within many countries, standardized and widely deployed signage is lacking. Developing standards for consistent and abundant signage for charging infrastructure can enhance the convenience of refueling for current EV drivers as well as highlight the availability of chargers for potential EV buyers. Governments can also help facilitate EVSE deployment in multi-unit dwellings by amending building codes and laws to mandate EVSE capability (such as EV-ready wiring and conduits) in all new construction.

The electrification of the global vehicle fleet is undoubtedly a long term ambition. Significant market transformation will likely unfold gradually over a number of years, thus requiring a healthy dose of patience for those anticipating a new era of clean transport. Yet the important achievements that the EV market has already made in the last few years provide a strong foundation for future growth.