Let me start by congratulating you all on your 10th anniversary. For me, Smart Energy International is still synonymous with Kate, Priscilla and Rudi – all dear friends whom I have known ever since they started the magazine back in 1996.

Our first meeting was in Vienna that year, where Kate and Priscilla were ‘manning’ the Smart Energy International stand. They were both very excited about the new magazine – but maybe even more excited about their trip on the Danube which they had scheduled after the event! Ten years ago metering was not the hottest thing in the utility business. Most markets were not regulated or liberalised, so who cared about metering? Customers had no choice, so there were no worries about the cash flow. This all started to change in 1998. Around that time, at one of the last MATES conferences,

Synergy and Smart Energy International launched the idea of our own series of metering events. Starting with a small seminar in London in 1998, we organised our own first Metering Europe event in Spain in 1999. With 135 participants from all over Europe, this was the kick-off for what has become a global series of annual metering events.

After Spain, we continued the global expansion of the events in 2000, and chose more exotic locations like Bangkok, Curaçao and Nairobi. These were all memorable events where both we and our participants broadened our understanding of the metering business. Many of the companies who were present in the early years, and who are still loyal contributors to Smart Energy International and delegates at the events, probably had no idea in what direction the metering business was heading. People were wondering what made ‘these metering freaks from South Africa and The Netherlands tick’. I think we have proved that we were, and still are, on the right track. With the growth of the events, the magazine also became even more international, and contributions from exhibitors and speakers from all over the world made Smart Energy International the number one source of information for anyone who is involved in metering.

Now, ten years down the road, it is difficult to imagine a utility company where there is no focus on the metering business. With events attended by over 1,100 people who want to hear about the developments in metering, it is clear that metering (also linked to billing and CRM) is still a hot topic. And now that energy policies are pushing for increasing energy efficiency, better customer service and open and transparent markets, metering will continue to play a vital role. Smart Energy International and our global events will continue to share information and ideas and to bring the global metering community together.

Over the past ten years I have had the pleasure of spending time with the Smart Energy International team in all corners of the world – walking on beaches in Curaçao, exploring Bangkok’s nightlife, Latin dancing in Miami, tapas tours in Madrid, lovely dinners in Italy, boat tours through the canals of Amsterdam, discovering Down Under in Sydney, climbing Table Mountain in Cape Town and sipping Singapore Slings in the only place in the world where you can get them right.

As you may appreciate, the business of organising events is sometime stressful, but also has its moments of pleasure! I am sure that the next ten years will be as exciting as the first. I am confident that Smart Energy International will remain a vital source of information to the industry, and look forward to our working together for some time to come. And I’ll toast your 10th anniversary with a nice bottle of wine! 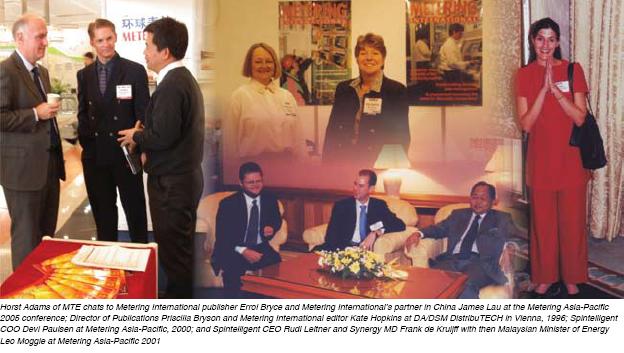