Most European countries have neglected to integrate advanced power metering into energy efficiency strategies despite the pressing need to reduce CO2 emissions. The European Environment Agency noted in 2005 that only two of the EU15 member states – Sweden and the United Kingdom – could anticipate meeting their burden sharing targets under the Kyoto Protocol.1 All others were projected to be significantly above their commitments.

Germany and France nevertheless expected that they would be able to reach their targets by 2010 using additional domestic policies and measures. Advanced metering may contribute to this objective by using consumer interaction and automatic device control to reduce energy consumption.

Difficulties of Kyoto fulfillment in Germany

Germany is subject to particularly rigorous constraints for limiting greenhouse gas emissions. Legislated nuclear phase-out, delays in offshore wind farm realisation, and the ongoing neglect of demand side management have made the construction of new fossil fuel power plants necessary. One quarter of the country’s electricity is produced using lignite, an abundant but low quality grade of domestic coal that emits three times the CO2 per kilowatt-hour of highly efficient natural gas generation.

Due to economic decline in eastern Germany, total greenhouse gases in the year 2000 had fallen to an encouraging 18.9% below the reference year (1990) status. Although Kyoto fulfillment of 21% thus appeared close at hand, emissions subsequently rose to a level of 17.4% in 2005.2 Germany’s overall climate protection strategies are rated as the fifth most effective in the world by the environmental organisation Germanwatch. Yet the CO2 emissions of private residences rank only 31st among the 53 industrialised and emerging nations analysed. Despite the widespread use of renewable energies, moreover, the electrical power sector has also been relegated to 23rd place due to its high reliance on hard coal and lignite. 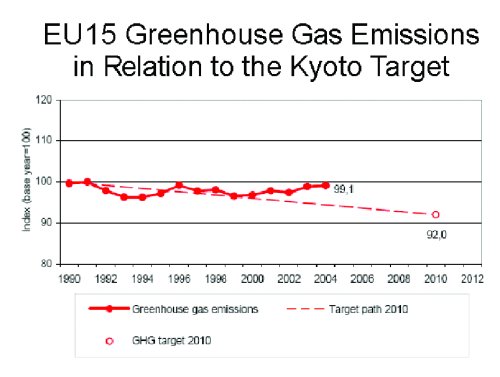 German utility companies have requested a prolongation of nuclear power plant operating permits to assist in Kyoto compliance. By contrast, no public discussion has ensued on demand response strategies for reducing generation requirements. While power producers are not oblivious to advanced metering technologies, the dependability of the present supply infrastructure has obscured the advantages of their adoption. Nearly three-quarters of Germany’s electricity production is independent of imported fossil fuels. In 2005, nuclear energy accounted for 26% of generation, followed by lignite (25%), renewable energies (10%), and domestic hard coal (9%).

This high degree of self-sufficiency has engendered a pervasive indifference to the cost benefits that abundant local resources should be providing. German consumers pay the same price for lignite power as for electricity generated from imported natural gas, even though the former is produced at significantly lower cost. Rather than being invested in demand reduction, furthermore, the accrued profits are often devoted to foreign acquisitions. The earnings amassed by the Swedish state-owned Vattenfall Europe AG from environmentally detrimental lignite power production in Germany are also channelled into ecological modernisation of the electrical power industry in Sweden itself. 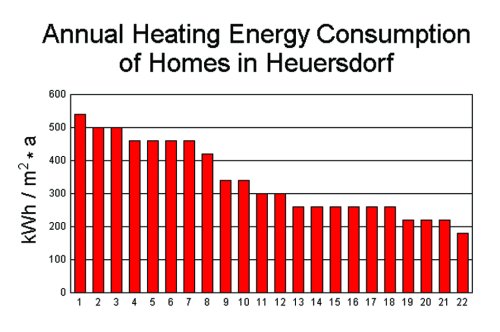 Effective 1 July 2007, Germany’s Electricity and Gas Supply Act (Gesetz über die Elektrizitäts- und Gasversorgung) will allow certified power meters to be supplied, installed, and maintained by qualified third party contractors. The customer may also outsource billing services. The significance of these guidelines for energy conservation, however, has not generally been appreciated. Power meters have traditionally been read in Germany only once a year.

Utility bills therefore contain little information suitable for altering daily consumer behaviour or stimulating the purchase of more efficient appliances. It is difficult to make an economic case for the adoption of innovative metering practices if only negligible amounts of electrical power may be saved. Due to lower incomes, for instance, many households in eastern Germany use only about 2,000 kWh of electricity per year, less than half the national average.

However, advanced metering may be extended to heat and water usage to realise greater cost benefits, as the following example illustrates. A survey of 22 homes in the village of Heuersdorf, a community threatened by lignite mining, has revealed vast, largely unsuspected variations in heating energy consumption for comparable levels of human comfort.

Fuel expenditures varying by up to a factor of three have been determined, ranging from 180 to 540 kWh/m2/yr. Since one litre of heating oil supplies about 10 kWh of thermal energy, up to 50 litres of oil per square meter of living space are being employed annually in some dwellings. Even if only modest reductions were to be achieved by comparing data between homes and correcting excessive consumption, the required metering devices would be fully amortised within a very few years at current fuel prices.

As a rule, German efficiency policy focuses on modernising buildings, enhancing motor vehicle performance, and improving heating, power generation, and manufacturing equipment. Little regard is paid to ongoing consumption. This practice rests on the assumption that energy efficient innovations will be integrated into product design. However, it remains impossible to predict the frequency and intensity of device use, the observance of procedures for operation and maintenance, or unexpected deviations from specified system performance.

The feedback of information from such occurrences enables corrective decisions to be made on an immediate basis. The annual meter data collected in Germany are unsuitable for this purpose. The metering provisions of the Electricity and Gas Supply Act cannot yield significant energy savings until demand response capabilities have been incorporated into the grid supply infrastructure.

According to basic control theory, feedback information must be provided at double the frequency of the process it is intended to regulate. The yearly utility bills issued to retail customers in Germany allow only those variations enduring for at least two years to be detected with mathematical certainty. Daily or even seasonal changes of consumption are not recorded. Short-term decisions on energy use are therefore based on random information, invariably misdirecting a portion of available resources into ineffective or even counterproductive measures of Kyoto fulfillment.

The lost opportunities for energy efficiency may be inferred by comparing annual utility bills in Germany with the more frequent meter readings provided to customers in other countries such as the USA, Canada, Australia, and parts of Scandinavia. In the British study ‘Towards Effective Energy Information’ published in 2003 by the Centre for Sustainable Energy, the monthly feedback of printed and graphical data was determined to offer sustained energy savings of 5% to 10%.3 Persistent indications of excessive consumption prompt the consumer to lower his power costs by correcting wasteful behaviour or purchasing energyefficient appliances.

EU requirements on metering and billing

To realise the benefits of current metering technologies, the 2005 Directive of the European Parliament and of the Council on energy end-use efficiency and energy services prescribes standards of metering and informative billing of energy consumption.4 Competitively priced individual meters are specified that accurately reflect the customer’s actual energy consumption and actual time of use.

General access to information on available energy efficiency measures and to technical specifications for energy-using equipment is also stipulated. Despite the favourable prospects for increasing the transparency of consumption data, however, the EU directive specifies that overall implementation costs should remain reasonable in relation to the volume of consumption and savings potential. Since European households use considerably less power than their American counterparts, advanced metering may not be considered economically justified for private customers. If interactive techniques for improving energy end-use efficiency are nevertheless to be implemented, additional cost benefits must be ascertained and incorporated into the metering infrastructure.

The costs of remote metering can be compensated using a combination of inherent and ancillary functions formerly realised only in a random manner, if indeed at all. The wide area network is suitable for customer emergency notification, remote service disconnect, as well as power quality monitoring and grid maintenance functions. The insurance risks arising when these capabilities are omitted constitute the economic justification for their implementation.

An advanced metering infrastructure may be expanded to include utility data collection on heating energy, water consumption, and possibly even wastewater due to its hydrological significance in certain localities. Intrusion, smoke, and emergency medical alarms will further defray costs by providing additional subscriber services.

A power meter that performs as a hub for these functions constitutes a local area network gateway. A wireless mesh network employing ZigBee or other networking technology allows the meter to process and store information for controlling appliances, thermostats, and alarm devices using appropriate software routines.

Power meters in North America are frequently capable of bidirectional operation, enabling the electricity produced by solar panels, wind turbines, and biomass generators to be fed into the grid. This arrangement, termed ‘net metering’, effects a deduction from the utility bill at the same rate paid for power received.

In most countries of Europe, in contrast, power from onsite generation is bought entirely by the grid operator at a different rate than what is sold to the customer. In Germany, for instance, Euro 18 cents ($0.23) per kWh may be charged for electrical power, while the electricity generated by a solar array is delivered to the grid at 51.8 cents/kWh ($0.66). Rather than a bidirectional meter, therefore, a twometer configuration is necessary to provide separate billing information. This arrangement enables the CO2 reductions achieved by using renewable energies to be calculated in reference to regular grid power.

Correlation of energy production and storage

Solar generation and wind power are subject to meteorological variations, but their contribution to reliable energy supplies may be increased by employing storage devices such as batteries or pump generating stations. Such equipment is priced between $250 (compressed air devices) to as high as $10,000 (hydrogen production and generation) per kilowatt capacity.

Time-of-use pricing achieves the same purpose more economically in certain applications. Rather than the costly storage of energy, appropriate information may be indexed on those non-critical tasks that are capable of being executed whenever excess power is available. The power meter is equipped with the necessary control logic to activate and disconnect the respective devices. Deep freezers and electric water heaters are particularly suited for this application, since their thermal storage capabilities remain intact if power is interrupted for short intervals.

Consumer data exchanges as a pathway to conservation

Any advanced metering system designed for resource use efficiency can be programmed to accommodate consumer preferences in attaining this objective. The control of power usage requires sufficiently comprehensive data for decisions on energy efficiency that utility companies and grid operators have often not been willing to provide. Security regulations may in fact restrict the redistribution of certain data, particularly those necessary for making crosscomparisons between individual households.

For these and other reasons, it is essential that selforganised groups of consumers or their contractors are able to exchange data among themselves on a voluntary basis. In this manner, they may decide by mutual consent the extent to which collective data will be used to diminish individual or aggregate resource use.

Remote-reading meters for electrical power and other resources therefore require a standardised interface for display and evaluation of consumption on any personal computer. Data transfer to other group participants can be performed via the internet or within a wireless local area network.

The transition to a metering infrastructure that promotes Kyoto fulfillment may be accelerated by pursuing innovative opportunities for market development.

The use of advanced metering infrastructures capable of interactive demand response can materially contribute to reducing the entropy inherent to excess fossil fuel consumption in a mutually reinforcing approach to climate protection and resource conservation. Both objectives are integral to the efforts of European countries in fulfilling their Kyoto commitments and promoting energy independence.