The principle for choosing one or another system should be based on the system’s extendability and adaptability, with the latter present at both the lowest level (i.e. metering devices) and at the highest level (i.e. data processing). In general the AMR developer and the customer will develop a relationship as partners, but one should always be ready for the worst. It is far from usual that every AMR manufacturer is able to connect a standard interface meter (e.g. with RS485) to an identically interfaced subsystem, and often the communications protocols of the meter and the data collection subsystem turn out to be incompatible. The customer is then forced to replace even modern meters and bear the additional costs.

There are also problems of another sort: after a system has been running for some time the need may arise to replace meters because of their low quality or because they lack certain functions, but this proves impossible because of the proprietary nature of the equipment (i.e. that the meter incorporates features unique or essential for the system). The problem with such issues is that often they are not obvious and are difficult to define at the system implementation stage. The prospect of encountering such problems also constrains AMR customers. From this perspective KYP Alliance Ltd stands out. In designing AMR systems for the domestic sector, the company has developed data concentrators and communication equipment that form a transparent channel, capable of connecting to a meter from any manufacturer (with RS232 or RS485 interfaces).

KYP Alliance has also given due attention to the metering devices themselves. Considering that the meter is a key component of the system, the company has developed meters – both single and three-phase – meeting the most advanced requirements of energy distribution companies. In addition for systems of low capacity, such as a small number of meters at a transformer substation, a virtual data concentrator can be used, which significantly reduces the cost per consumer and the cost for the system as a whole. The standard (hardware) concentrator allows connection of up to 1,500 meters.

KYP Alliance’s efforts towards integrating the metering devices have resulted in the development of a low cost solution for the case when meters having pulse output have to be incorporated into the system. The company’s IMCO2-7 multi-channel impulse counter provides the possibility of enabling in the system up to seven meters with pulse output of any standard (NAMUR, S0). In addition, support of the DLMS protocol makes the device universal for application in AMR systems from other manufacturers. KYP Alliance also carries its concerns for compatibility through to the level of data processing, with solutions based on DBMS Oracle 9i supporting OPC DA 2.0/1.0 and OPC HDA 1.0 protocols for interaction within the AMR system and with the systems of other manufacturers. The web-oriented interface of the upper level programs makes it easy to organise the required AMI structure. This approach is aimed at dispelling customer apprehensions that, as a result of a divergence in technologies or evolution of a set of standards with various application fields, their system may at some future time become inoperable for some or other reason.

It should be noted that the rapid changes in various standards restrains many utilities from taking a final decision over their AMI implementation. Many questions arise at the stage of designing the AMI upper level, particularly with regard to the software. There are still no clear answers to questions such as how the databases and repositories should be organised and what interface should be used for applications to interact with these. One thing is certain, however: the utilities are not anyway going to develop the software themselves and they will buy existing products.

At this point, the principle of a partnership between the manufacturer and the customer will be appreciated. With a distributed network of representatives in various countries (India, Brazil, European Union (Poland), the Commonwealth countries, China), KYP Alliance pays great attention to the technical support of the systems and equipment it has supplied. Warranty and post-warranty servicing on a contract basis for the duration of the operation period is a pledge of confidence into the future for every user of KYP Alliance equipment.

DIFFICULTIES UTILITIES ENCOUNTER
Nevertheless, the list of difficulties that utilities encounter is not yet complete. The problem of data delivery in general and the ‘last mile’ problem in particular is another key issue, which is not easy to sidestep. Here one needs a clear understanding that these problems are solved in different ways and compromises are unavoidable. For example for a PLC application on low quality mains, it is possible that by modernising the electric main the cost efficiency of AMI implementation could be increased by 20 percent, compared to using radio. Moreover, if KYP Alliance PLC modems are implemented, their efficiency can be much higher than traditional PLC technologies, because the family of SM-16 PLC modems (in the price range US$35 to 100) have been successfully tested in power networks of the poorest quality (e.g. worn out mains, widely branched, with wire twistings, etc.). 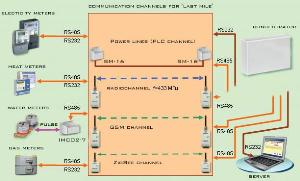 KYP Alliance has developed data concentrators and communication equipment that form a transparent channel, capable of connecting to a meter from any manufacturer (with RS232 or RS485 interfaces)

Even allowing that the SM-16 is able to operate as a repeater, it is not always possible to organise all the communication channels with its use, however. On the other hand, there is no other similar equipment capable of giving such a result. Dead zones, interference, exclusive bands for radio technologies, and the impossibility or high cost of laying wire communication lines are all unavoidable. The point is that the various technologies should not be opposed to one another. Only by combining PLC, ZigBee, GSM, and radio technologies is it possible, with minimum costs, to provide a flexible and easily scalable system. It is for this reason that KYP Alliance has developed all the necessary tools for such a strategy. The SMR-16 radio modem, forming a communication channel in the free-use band, GSM and ZigBee modems all help to manage the channels that are most complicated in terms of data delivery.

Assuming the customer comprehends all of the above and has already made a choice, there is still some hesitation. Here, the customer can suggest that the potential AMI developer organise a pilot project at the most problematic points. Neither advertising nor work experience in high quality power lines will help where there is a need for extra costs to counter the lack of mains quality. In real conditions in the field, all defects, even those deeply hidden, will emerge.

The equipment designed by KYP Alliance Ltd has grown and matured in such environments and this has made it possible to solve the most complicated problems. In developing its products, KYP Alliance has aimed to make them both reliable and inexpensive. Winners are always preferred!