Advanced metering infrastructure (AMI) systems are becoming more popular as water utility companies are looking for ways to expand their customer service capabilities as well as improve their conservation efforts.

AMI systems utilising fixed networks systems are now able to capture daily reads with interval data down to every 15 minutes of consumption. This data is only available by having the meter interface unit (MIU) send a radio signal to a collection point that can be a mile or better away from the meter. The collector then sends the reads to the water utility for billing and analysis purposes.

The Cucamonga Valley Water District (CVWD), located in Southern California, has implemented a number of AMR solutions over the last nine years. The experience of these implementations and the justification used to move through the different phases of the automatic meter reading (AMR) projects provides some insight for other water utilities looking to expand their AMI utilisation.

CVWD is a special district that is governed by an elected board of directors. The district provides water and sewer services to the community of Rancho Cucamonga and portions of surrounding cities. CVWD serves 50,000 metered services and a population of just under 200,000 people. The district has been using an Itron AMR and AMI solution since 1999.

LOOKING TO TECHNOLOGY
In 1999, the Cucamonga Valley Water District was experiencing a significant housing boom, which was adding more than 200 new homes per month to the billing system. The customer service department was unsure as to whether to hire more staff to read the additional meters or to look to a technology solution to provide the additional assistance. At the time of this decision, the District was using Badger meters for its residential installations and an Itron hand-held to capture the reads. With the assistance of its vendors, the District made a determination that the Itron AMR solution was the best fit for the current situation as well as future desires to expand the programme.

The first step in implementing the programme was to get buy-in from upper management and the board that the solution was a viable alternative to hiring new staff. The solution presented to the board was to pass the cost of the new technology to the developers. Upper management and the board of directors accepted this solution and allowed the district to test run the technology at the speed of the construction. This first AMR installation was a radio solution that utilised existing handheld meter reading devices. By passing the cost of the programme to the developer, the district did not incur any initial costs of installation, and more importantly, it gave the district a starting point to launch the rest of the desired strategy for implementing AMR.

The first walking radio route was extremely effective, and the District was able to demonstrate to upper management that the programme was working according to design because of the small scale of the project. The District was able to change its operating procedures with only minimal concerns by staff. This success was used as the starting point to move into the next phase of the desired AMR plan.

As the technology evolved and improved, the District became interested in moving to the next generation of AMR: mobile technology. The design for this implementation was that all new installations would move toward this technology as well as some of the existing walk routes that had meters that were difficult to access. The district was able to show the board that it had success in the previous AMR implementation and now with this request, it included a number of new points:

Safety concerns could be addressed. Mobile AMR would eliminate having to deal with dogs in backyards and dodging traffic in high-traffic areas

Read accuracy would be improved. By stressing these points, the District was able to move to the mobile AMR solution in 2003. The programme moved at a steady pace for over two years, allowing staff to build their confidence in the product and to allow the system to work through the difficulties of making a significant change. By the middle of 2005, the District had installed more than 8,000 MIUs in the field that were being read by mobile AMR technology. 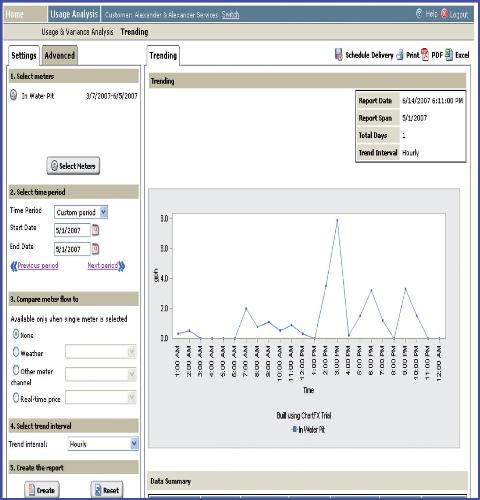 The value is in the data: Customer service representatives have the information to answer customer questions on usage.

NEW SOLUTIONS
In 2005, the District made a significant decision to seek out new technology solutions and work processes to improve customer service and to increase customer knowledge of the need to be more conservation-minded. With the cooperation of the AMR vendor (Itron), the District began a discussion to consider being the Beta test site for Itron’s new AMI fixed network meter reading system. In the discussion to justify this new programme, the District identified a number of points that were in the line with its new goals of improving customer service.

The first and most significant point that was recognised by going to a fixed network system was that this product specifically focused on the customer’s needs. Both the handheld and mobile technologies added no additional value to customers. The district was still getting only bimonthly reads; it was just getting them faster in a safer manner. The additional features of the AMI fixed network brought significant values to customers and had the potential to move the District into being a proactive rather than reactive utility.

The new technology included in the fixed network system had the potential to add many new features that help provide better customer service and increase the benefits of conservation programmes.

These key points, which focused on better serving customers and providing greater tools to improve conservation measures, were critical in getting the approval to make the move to become the Beta test site for the fixed network system. The District installed 200 MIUs in the field and two collectors. The system was fully implemented and operational by June 2005. The District worked with Itron to test new radio units as well as collectors for nine months.

In the spring of 2006, the District presented the findings to the board: 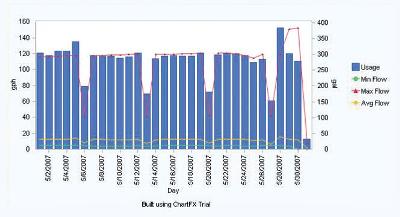 SLOW AND STEADY
These findings were the justification for a five-year budget proposal delivered in the spring of 2006 for a complete fiveyear plan to replace and/or retrofit all meters in the District with the new Itron fixed network solution. By taking this systematic approach to implementing an AMR and now a state-of-the-art AMI programme, the District was able to demonstrate that it could have success on a small scale, and by gradually increasing the project size, it continued that success by using those previous efforts to build a case for the next implementation of the overall plan.

The other critical point the District achieved by using an incremental approach was buy-in from staff, management, board members and the public. By starting small and implementing change at a pace that staff could understand and not feel overwhelmed, the District minimised the stress that usually accompanies major implementations. The District learned from its mistakes at a rate that allowed it to make a change before the errors caused significant problems. Slow and steady wins the race when it comes to implementing AMI solutions.

A successful AMI programme is not measured solely on achieving a desired number of MIU installations. The bigger success is getting support and buy-in from the management team, staff members and the public. The data and information that can be captured is only good if it is used to enhance the operations of the organisation and improve customer relations. Without buy-in and full support, the true value of the programme will not be realised.