In 2008, EDE Este introduced a series of strategies and projects within its action plans to achieve a reduction in losses. Thanks to the high degree of precision in the effectiveness and achievement of the objectives, a decrease of four percent was obtained in the losses in 2008 compared with 2007.

In 2008, the plans executed plans contributed a total energy of 179.39 GWh, both as recovered as well as additional. These contributions were obtained through the execution, control and continuous improvement of loss reduction projects, which has been fundamental to achieving these objectives. A summary of the main results (per project) achieved during 2008 is shown in Figure 1. 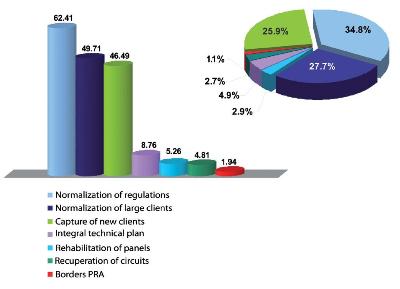 RESULTS ACHIEVED IN LOSS REDUCTION IN 2008
At the end of 2008, the indicator of total losses of the company reached a value of 33.7%, thus achieving a total loss reduction of 4% with respect to what was obtained in 2007 (Figure 2).

This improvement was due mainly to the contributions of energy to the loss reduction plans, considering the similar amounts of energy purchased in the two years (3,037 GWh in 2007 and 3,051 GWh in 2008) and a 77% demand satisfaction.

EVOLUTION OF THE CASH RECOVERY INDEX INDICATOR (CRI)
The continued increase in the cash recovery index (CRI) is based mainly on the ongoing investment of capital in the development of projects aimed at loss reduction, the increase in collection of billed amounts, improvements to the distribution networks of EDE Este and improvements in the quality of life of the people of the Dominican Republic. At the end of 2008 this indicator was at 65.5%, an increase of 3.9% with respect to 2007 (Figure 3).

Figure 3 – Evolution of the CRI

STRATEGIC FOCUS OF THE LOSS REDUCTION PLAN FOR 2009
For 2009, EDE Este proposes to reinforce its strategy of loss reduction on the basis of what has been learned and achieved in the years 2007 and 2008. During this period, the procedures were adjusted to the best practices of non-technical loss reduction in electricity distribution companies.

In addition, opportunities for improvement have been identified within the portfolio of projects and their functioning structures; and in general, the plan has been aligned to the general strategic planning of the company, so as to be able to support the projects on a sustainable long term basis.

The strategic focus led to the development of five actions of improvement:

Integral technical loss reduction project
The integral technical project was initiated in 2007 with the objective of reducing energy losses and improving revenue collection in selected circuits based on asset management criteria.

This project integrates all the areas of action of the company, thus fostering community participation so as to guarantee the putting into practice of improvements in the network, the rehabilitation of the points of supply, and the optimisation of commercial management to obtain feasible results that would sustain a 24-hour service. This can be extrapolated to an improvement in the quality of life of each client (Figure 4). 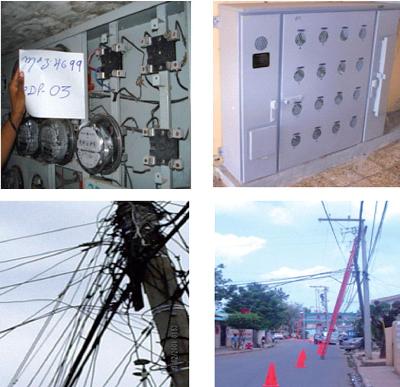 Inspection, normalisation and capture of regular clients
There were major advances in 2008 in the initiatives developed in the regular client segment (comprised of residences and small commercial operations), with an energy contribution of 109 GWh. This was the result of the execution of a loss reduction plan that promoted priority of execution on the circuits and geographical routes of high losses, with the aim of improving the effectiveness of inspections, the normalisation of anomalous supplies and the capture or contracting of users.

Normalisation of supply to large customers
This consists of the normalisation of the metering systems of large customers, using new schemes that incorporate automated meter reading, as well as the use of other follow-up and control mechanisms that allow for the prevention of deviations, faults or breakdown, in optimum time, and other issues that might impact on the losses or on the good service provided. In 2008, this project contributed a total of 49.73GWh as part of the fulfilment of the plan of recovered energy.

Rehabilitation of panels
This project is aimed at the rehabilitation of the security panels of the meters in vertical or multi-family installations, thus reconditioning the electrical infrastructure in a safe manner. Through the continuous execution of this project (2007-2008), more than 1,300 installations and rehabilitations have been carried out in areas with high levels of repetition of fraud and above average losses of energy.

Improvement of the telemetering platform
In 2008, an automatic meter reading pilot project was carried out, with the idea of substituting the wired platform with GPRS in order to improve the transmission of data.

System of energy control
A system of energy control was implemented that allows one to obtain, in an automatic way, the losses by circuit and by zone, through comparison of the sales of energy with the total billed. This system is currently in an interface with the OPEN SGC commercial system. In this manner, the balance of energy can be obtained timeously and can be used as an important tool in the analysis of losses.

PERSECUTION OF ELECTRICITY FRAUD (ACT 186-07)
On 20 February 20 2009, Act 186-07 came into force, providing sanctions for all activities related to electricity fraud – an event which is considered as a turning point in the history of the Dominican Republic. Society demands, on a daily basis, continuity of service, because it desires to have a better quality of life. At the same time, the production sectors are claiming a lower price in order to be more competitive and the government needs to reorient resources that are currently assigned to the electricity subsidy towards other sectors, such as health, education, security, and infrastructure among others.

The Act is a double edge, as it also expects the distributing companies to improve their commercial service by ignoring the inadequate practices sanctioned in the said Act in reference to the following:

On the other hand, clients will have to face penalties based on their lack of payment. With the coming into force of Act 186-07, the supply to thousands of clients will be regularised. Also electricity fraud will be persecuted, losses will be reduced, the deficit of the sector will decrease and, as a result, the electricity customers will benefit from an improvement in the standards of quality of service.

In this sense, during March of this year, EDE Este introduced various communication actions to educate and orient the community on the implementation of the measures contemplated in the Act. It also put into effect an amnesty for users who had illegal connections with the purpose of encouraging them to voluntarily come forward and present themselves at the company to regularise their situation. With a new campaign, “EDE Este makes it easy for you,” in just a month more than ten thousand new clients were incorporated. During this campaign, the distribution company published a list of 50,000 users on their website who had more than five unpaid bills as another tool of persuasion to stimulate voluntary regularisation, as well as to make known the legal consequences of electricity fraud.