Intelligent, or smart, grids are the key to the integration of renewable energies and reduction of greenhouse gas emissions. According to the European survey participants of trend:research´s current study “Smart Grids in Europe to 2030,” a majority of 70% is convinced that smart grids will become essential for the optimal integration of decentralized power plant and effective grid control.

So far the market is still provider driven. Technology producers are already active in taking position while plant and grid operators persist in a waiting position because of remaining questions of financing, missing technological standards and an ambiguous political frame-work.

Based on the survey findings and extensive analysis trend:research forecasts that the market volume for essential smart grid submarkets will continue growing from the theoretical market volume in 2010 of €99 billion up to €263 billion (cumulative) by 2030. A major share of this growth is attributable to the submarkets, with a gain by 2030 of €115 billion for net-work expansion of transport and distribution grids as well as €48 billion for information and communication technologies (ICT). Especially the Nordic countries are expected to take up a pioneering role in implementing smart grid concepts.

According to the polled European market experts there is no universal definition of smart grids but the findings indicate the term is generally associated with intelligent networks be-tween different forms of energy production and consumption to optimize distribution structures.

In the study “Smart Grids in Europe to 2030” the expected market potential of smart grids is identified drawing on the existing conditions and the status quo of the electricity grids within the European countries surveyed. Within the framework of the survey results this is done on a qualitative representation of European smart grid pilot projects as well as a detailed consideration of relevant technologies and applications.

The study offers insights into the technological requirements of European plant and system operators and based on country specific assessment, market growth rates for smart grids are forecast to 2030. In addition possible market potential as well as market drivers and market barriers are identified.

trend:research applies various methods of desk and field research. In addition to the extensive analysis of internal and external databases the study draws on 63 expert interviews with market players across Europe. Interviewees included energy suppliers, grid operators, centralized and decentralized power plant operators, technology providers and producers, as well as experts from universities and institutes.

Status quo of smart grids in the countries studied

The study explores the current state of development and evaluates the influence of various factors that may shape the market in future. The results are based largely on the views of interviewed plant and grid operators, as these are the key players involved in the implementation of smart grids. The general state of development of smart grids has been evaluated particular in Austria, Switzerland, Norway and Germany as mainly average Figure 1). 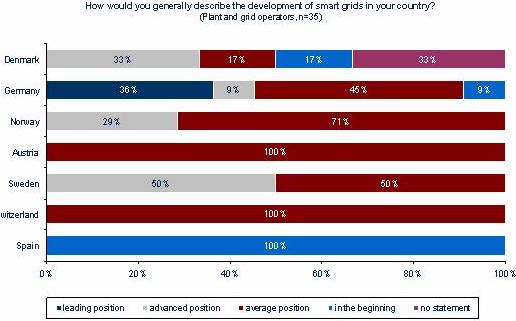 Approximately one third of the German respondents regard Germany as being in the leading position in the development of intelligent grids; at least 9% rate the level of development as progressive.

In contrast, another 9% of the German respondents believe that Germany is only in its early stages of development. This view was supported by the delayed implementation of smart grids and the vague purpose of the federal government. A progressive development of smart grids is recognized by half of the respondents in Sweden.

In order to account for the slow growth rates within the smart grid market, the respondents were asked about the major market barriers that suppress fast market growth. The most important factor was regarded to be the ability to invest (47% of nominations) as well as the bad economic situation (19%) (Figure 2). 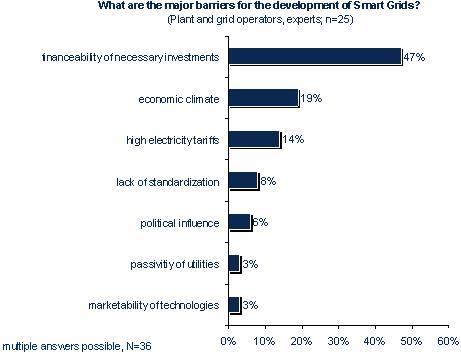 Another market barrier for smart grids is the high energy costs for consumers (14% of nominations). The respondents also criticized the lack of standards (8%) to facilitate the national and international exchange of information which would provide assurance regarding to the investment in appropriate technologies and communication standards. Also the respondents have a concern with a regard to policy interventions (6%). This indicates the current legal regulation, which does not allow the realization of a market driven price improvement. The technological market maturity of the individual technology components is perceived by only 3% of interview participants as a barrier.

According to the interviewed industry experts, facility and network operators, smart meters are an essential part of smart grids (54% of respondents, 17% of mentions; Figure 3). 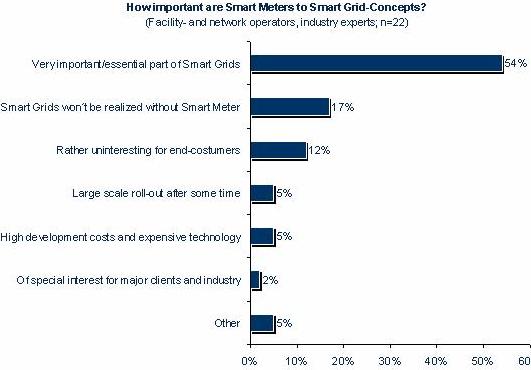 Smart metering provides a basis for further services and products, such as “Smart Homes” or Smart Grids. There is a tendency that the different smart meter producers are searching for a basic solution to ensure compatibility. In the Scandinavian countries, Italy and England smart meters are planned to be in use throughout the whole country by 2022 at the very latest.

Market Development of smart grids in Europe to 2030

The prognosis of market volumes for the various sub-markets (e.g. grid extension, ICT, smart metering) as well as for the total market are based on the survey results as well as further analyses, plausibility checks and general market information.

Using the theoretical market volume of 2010 as the base value the possible development of the market for smart grid technologies through the introduction of smart grids in Europe is forecast. Thereby the relevant market factors such as the development of electricity supply and demand, transmission network expansion and network load in the European context of conventional and renewable energy sources is analyzed under various scenarios. In order to view the characteristics of the influencing factors in a differentiated way, the reference scenario, which is considered the most likely, is joined by “progressive/optimistic” and “degressive/conservative” scenarios.

In the reference scenario, the overall market volume in the smart grids context increases with the growth of grid extension, ICT, smart meters and electricity storage capacities (with-out power electronics) from the current €99 billion to around €263 billion in 2030 (Figure 4).

Due to high installation costs the extension of the transmission and distribution grids is the biggest part with an overall increase of approximately €115 billion. The transport grids ac-count for €41 billion while the remainder is generated by the distribution grids.

The market volume for information and communication technology (ICT) almost doubles, increasing from €27 billion to €46 billion by 2030. The market is experiencing significant growth in the forecast before 2020 by a first wave of investment in smart metering, sup-ported by a statutory introduction of smart meters, followed by the increased integration of decentralized generation systems. The effects of processes in metering, meter reading and billing towards smart metering as a key element of smart grids are evident in this scenario and lead to changed requirements, for example at the level of processes, IT systems and services. The acceptance of consumers for smart metering, load variable tariffs and control of consumption increases in this scenario in the medium term. In the reference scenario, dissemination proceeds of decentralized power generation systems (e.g. heat pumps, photovoltaic systems, etc.) and technological development in the area of networking of plant go ahead to ensure stable grid operation.

In the view of the survey participants ICTs as the interface between the physical infrastructure such as smart meters and applications for operational control have a key role. ICTs already exist, but technical standards for interoperability and integration between different systems are no yet realized.

In the regressive scenario "moderate proliferation of smart grids," developments in the market run more slowly, market and trade barriers are removed only with difficulty, and the stimulation of the process is rather slow.

In the progressive scenario "rollout of smart metering and rapid dissemination of smart grids," the market gains faster than in the reference scenario. Seen in total there is a trend to mergers, especially in the field of technology suppliers. Thus, cooperations between companies takes place in the ICT sector with meter technology companies that develop solutions for smart grid concepts. In addition, some large, global technology companies, seen mainly in the field of ICTs, recognize the potential of the smart grid market and try hard to position themselves in this area. According to the participants, the intensity of competition will increase in the medium term.