First, F-RAM is capable of collecting data for an unlimited period without wearing out.  In an electric meter, F-RAM can be written every second or minute for the life of the meter.  No other nonvolatile memory offers this capability.  Less advanced designs for digital meters must rely on writing the data when power is failing because other memory products wear out very quickly if they are written too often.

Ramtron offers F-RAM devices with industry standard 2-wire interfaces from 4Kb to 512Kb that are ideal for electric meters.  The FM24C04 4Kb and FM24C16 16Kb devices are commonly used in low-cost residential meters, while the FM24C64 64Kb, FM24C256 256Kb and FM24C512 512Kb devices are suitable for advanced three-phase commercial and industrial meters.  These products are of sufficient bandwidth for metering applications and are easily integrated because of their small package outline (8-pin SOIC or DFN).

In addition to stand-alone memory, Ramtron offers integrated Processor Companion products which incorporate 4Kb to 256 Kb of F-RAM with integrated peripherals such as a real-time clock (RTC), a watchdog timer, and a reset circuit.  These devices are commonly used in time-of-use meters, which require that power usage be time-stamped.  In such systems, the nonvolatile F-RAM memory and the RTC record power usage and time-of-use.  The watchdog timer and reset circuit enable integration with a microprocessor in the system.

In addition to their high endurance, F-RAM products operate with very low power consumption.  The technology is capable of producing devices with standby current of less than 1µa and active current below 100µa.  The low power allows integration without a significant increase in the power budget.

The third benefit of Ramtron’s F-RAM memories is speed.  The underlying technology is based on RAM, like SRAM, rather than ROM, like EEPROM and Flash.  RAM devices are much faster for reading and writing, where write speed can be less then 200 nanosecond (ns).  For example, Ramtron’s FM22L16 is a 256Kx16 nonvolatile RAM that requires no battery backup.  It reads and writes with a 55 ns access time.  This device is ideal for many types of data collection and storage applications.

The ferroelectric material commonly used in memories is PZT (Lead Zirconate Titanate).  The figure below shows the two stable states of the crystal.

The memory cell (Figure 3) control requires a voltage to be applied across the ferroelectric material.

The plate line and word line are driven high.  This causes the electric field to be in the direction of the plate line.  If the orientation is a shown on the left in Figure 2 the ferroelectric material will switch.

After the data is sent to the output the original state must be restored.  Driving the plate line low reverses the field and restores the state.  The cycle time is not dependent on the time it takes to switch the ferroelectric material (nearly instantaneous) it is dominated by the capacitance that must be driven (tRC).

Battery-backed SRAM is often used in applications requiring fast write times.  F-RAM is an alternative for applications where the battery is not desirable (environmental issues, maintenance problems, etc.).  BBSRAM has a cycle time equal to the access time and, therefore, when considering F-RAM as an alternative, the restore delay must be addressed.  Figure 6 shows the relative difference between F-RAM and SRAM timing.

Modern complex control systems for applications like factory automation are becoming increasingly programmable and can adapt to changing conditions automatically or they can be adjusted by an operator over a network.  These systems can have a significant amount of state information that changes or could potentially change often.  If the state is distributed amongst various subsystems, it may be desirable to recover from a power failure gracefully.

A simple technique is to use one of Ramtron’s serial F-RAM devices (small outline) and a comparator.  Figure 7 is an example of a circuit that can be used as a state saving solution.  The comparator will trigger an interrupt voltage is determined by the resistor divider.  There can be significant time before the regulator drops out.  A F-RAM device with a serial peripheral interface (SPI), for example, is used as the storage device. 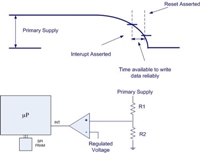 There are F-RAM devices available that can be clocked at 16 MHz.  In this example, if it takes 4 ms for the power supply to decay sufficiently such that the regulator drops out, 64Kbits (8Kbytes) can be written.  The data can be used to restore the system parameters on power up.

The Schlumberger meter is based on a pre-paid scheme where the home user must pay for electricity in advance.  F-RAM is used as nonvolatile storage for data such as meter identity, customer’s remaining credit, and operational data.  F-RAM was chosen by Schlumberger for its ability to write data at full speed, avoiding the complexity of a write-back pipeline to be managed at power down, and for its write cycle endurance, which allows data to be written at frequent intervals.