A European directive in 2006 required governments to ensure that customers have meters that provide actual overall and time-of-use consumption levels. The meters must be “financially reasonable and proportionate to the potential energy saving.” In Holland the energy authority wants all households to have a smart meter, but nothing is mandated: it’s down to the free market.

Unfortunately the free market was slow to react – utilities are a conservative industry – and cost plus standards were the key issues. In addition, the vendors of regular meters, which are basically electromechanical devices, lacked the technical resources needed to develop smart, multi-utility (gas and water as well as electricity) products. Nor did they have the requisite networking knowledge and had to fall back to powerline carrier (PLC) technology, which is surprisingly slow and there are other limitations, e.g. interference from household appliances.

This opened the way for the development of a holistic solution from the starting point of a clean sheet of paper, i.e. there was no legacy interest to protect. The technology and the network architecture (Figure 1) have been proven in the field, so let’s zero in on the cost issue, which is closely coupled to backhauling data from the meters to the utility provider/grid operator.

Meshed RF network and 2.5G backhaul
DSL is an alternative backhaul technology to PLC, but 2.5G is the preferred option for various reasons, one being the relative ease with which a wireless module can be incorporated. However, there is a cost issue since it means that every householder has to become a de facto subscriber, so every meter needs a 2.5G module and a SIM.

By employing a meshed network that forwards meter data to a “concentrator”, only one subscription/card is needed at the client concentrator. Each house is a node in a local area smart grid and up to 100 nodes can be networked in this way. Meshed RF technology is employed for local area communication. Costs are further reduced since RF chips cost far less than 2.5G chips. 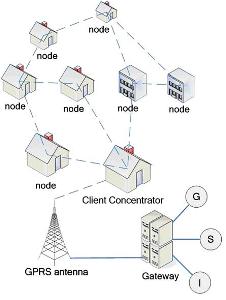 Figure 1. Meshed RF is a cost effective robust way of creating smart, local area grids. If any link goes down then traffic takes another route around the network. Rerouting is an intrinsic feature of meshed networking and smart algorithms are used to ensure that data packets take the shortest route to the destination address, i.e. the client concentrator. G = Grid Company; S = Supplier; I = Independent Service Provider (see Figure 2).

Multi-utility smart meters
The smarts come from an interchangeable module (a printed circuit board) that is incorporated in digital meters. The module can accept meter readings from digital electricity, gas, water, and thermal meters. In addition, it can be swapped out in line with technology developments and market requirements.

An interesting feature is the ability to connect an in-home display. The information provided is designed to improve consumer awareness of what used to be taken for granted: the consumption of electricity and other utilities and the tariffs. This allows consumers to control their energy bill by switching on appliances like dishwashers and washing machines when tariffs are lower. 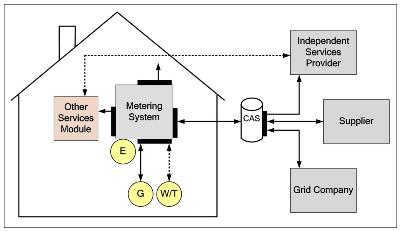 Figure 2. This high-level schematic shows the key multi-utility (electricity, gas, water and thermal) functionality required by the Dutch standardization authority. The “Other Services Module” enables additional services to be deployed, e.g. the in-home display. The “Independent Services Provider” represents forward thinking, i.e. an interface that enables the creation of new services based on consumption data. CAS is the Central Access Server (owned by the grid operator).

In-home displays can also be used to show how much electricity has been sold back to the grid and the rebate that the consumer can expect. Solar energy is the obvious decentralized energy resource, but so-called vehicle-to-grid (V2G) systems are also on the radar screen. V2G enables power to be sold to the grid by the electric-drive motor of a hybrid vehicle that is connected to the grid and is not being used for transportation. When the batteries need to be fully charged the flow is reversed. This is a key feature since most vehicles are parked around 95 percent of the time.

Consumers who deploy wind power can also benefit from the ability to sell electricity back to the grid. This comes from the fact that peak wind production will often come in the middle of the night.

Home networks
The ability to interface smart multi-function meters to a home network is an additional feature of the solution. Details about how this interface might be used in future are not clear, but consumers could connect their heavy duty appliances to the mains via smart plugs and an application developed by an Independent Service Provider would switch them on when tariffs were low. The PC or a mobile smartphone could also be brought into the loop in order to determine which appliances needed to be switched on.

Conclusion
It is clear that smart meters play a pivotal role in smart grids and it is hard to overstate the importance of this development. However, the ability to use electricity and other utilities in the most efficient way will only be realized by enabling cost effective deployment and by bringing the benefits to the immediate attention of the mass market.  This is something that is foreseen as using meshed smart meters and local smart grids on the delivery side of the equation and interfaces for in-home displays and home networks on the consumer side.