In an environment where distribution and transmission networks belong to the same party, instrument transformers come more and more into the focus of testing.

As a vital part of the metering and billing system instrument transformers have to be economical but reliable in operation. To meet these requirements, manufacturers have started to broaden their product range.

The conventional instrument transformer is an inductive transformer. The basic characteristics of its components determine its limits. Taking into consideration the maximal flux density and lack of linearity in the excitation curve of the iron core, these characteristics will restrict the size and the weight of the transformers and also the range of applications.

ACCURACY IS MORE SIGNIFICANT
Accuracy has always been significant. But now, with the liberalisation of the energy market, it is getting even more essential. There is no longer a single relationship between one supplier and one customer. Instead, the network is divided into the hands of several parties that produce, transmit, consume and those who cover more than one aspect. All parties involved have to balance their accounts with someone and certainly each of them has a vital interest to protect their revenue. Nobody wants to make huge losses arising in their part of the net. So what will be the logical consequence?

Each party is looking for an accuracy to rely on. The suppliers are most likely going to buy instrument transformers that have a testing certificate according to IEC standards. And in addition to this, they will test the devices before installation and also some time during operation on a sampling basis. The manufacturers have to provide accurate instrument transformers to meet such demand. The requirement to test all measuring transformers before bringing them into the market is not only desired by their customers but also for their own quality management. 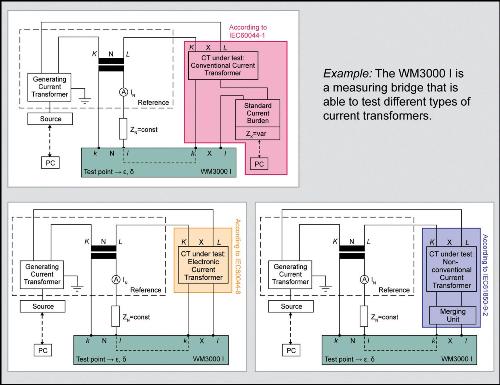 So for each type of testing one has to buy and install different equipment. This will not only require more space but also more investment. And not only that, for each transformer type one has to switch between the different test systems which takes more testing time.

ONE TEST SYSTEM FOR ALL TYPES
We have seen that there is an increasing number of different instrument transformer types. This is a trend that will continue rather than stop. So what is needed in the future is the possibility to cut down the amount of money and time spent due to this diversity. What could be more desirable than to have one test system that is capable of testing all types of instrument transformers – one test system that would be able to handle all different types of inputs coming from the transformers under test?

The test results are displayed as ratios and phase displacements directly on the screen, which is designed for easy operation of the test system. The WM3000 comes with a touch screen that is a direct interface to the operator.

The following tests are possible in cooperation with additional testing equipment. All tests are for current transformers, and tests 2 and 4 are also for voltage transformers.