North Delhi Power’s (NDPL) AMR pilot was started in 2003 and has led to an increase in revenue of approximately INR$200 million (US$5 million).

Challenges that NDPL faced in implementing the AMR project were the extreme climatic conditions, with temperatures often varying between 5 – 50 degrees Celsius. NDPL experimented with conventional modems, which often did not sustain the harsh conditions, before developing their own AMR boxes 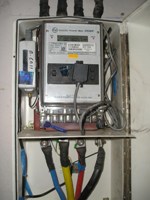 The utility also faced software problems, with the individual vendor softwares being compatible only with the meters supplied by that vendor. In Prasanna’s opinion, vendors don’t address issues once the collection of data has started and he criticizes the fact that there is no common platform for the various meters.

NDPL’s goal was to have a common platform and it felt this could be achieved only by implementing AMR using “AMRDA” – an in house developed software that is able to work within AMR systems from different meter vendors and deliver fully automated, end-to-end data.

The system that NDPL is using today is capable of delivering error-free billing data and automatic data analysis, and it collects the data easily and quickly and provides advanced analysis. NDPL’s AMR system uses API, which can display data from three different meter manufacturers in a single XML format. Twelve AMR analysts are employed in NDPL’s Delhi office.

Prasanna admits that when data collection was done manually, there might be up to 40 errors per day, and AMR avoids these. However, the implementation of AMR is financially viable only for the high end consumers, and would be too costly for the lower end residential customers.

NDPL’s commercial director, Ajai Nirula, comments that NDPL’s success stories have attracted a lot of interest from other utilities. He explains that NDPL’s data is 97 percent successful. Nirula is convinced that improved revenue collection is a breakthrough for an Indian utility.

For the future, he aims to sustain the excellent performance, continually identifying quality issues, improving anti-tampering strategies as well as signal, modem or meter interface problems.

Nirula sees a trend in India towards specialized outsourcing centers that serve utilities. NDPL is also planning to offer the services of analyzing customer data, serving as a consultancy and giving feedback to other utilities with the goal to improve Indian utility performance.