The hottest sector in the technology market over the next decade will be products that make reducing power bills and conserving energy as easy as managing cell phone minutes, according to a new report, ‘The Path to Perfect Power: New Technologies Advance Consumer Control’, from the Galvin Electricity Initiative.

Joining the trend of products making homes and workplaces smarter and more automated than ever before, these emerging energy devices will help consumers identify when they are using electricity and what electricity they are paying for, according to the report. The Galvin Electricity Initiative, launched by former Motorola chief Robert W. Galvin, has as its goal the creation of a ‘perfect power system’ in the US, and is leading a campaign to transform the nation’s inefficient, unreliable and insecure electric power system into one that can truly meet consumers’ needs in this new century. 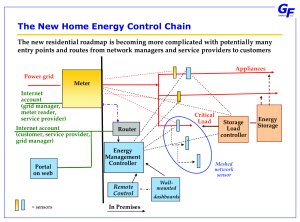 Currently, few consumers know the real cost of electricity, which fluctuates constantly. In today’s system, most users pay a bill that amounts to an average of the cost of the power they J use over a set period of time. But numerous demonstration projects and commercial applications have shown that consumers who know what they are paying for, and when, both use less and pay less for what they do use than do those who are not informed – and this in turn also has larger societal and environmental benefits.

Now, new and emerging technologies are set to give consumers increasing power over their electricity use over the next decade (Figure 1). In researching the report it was found that many of the major players in the technology world are engaged in commercialising tools in the communications and sensor space that are aimed at the comfort, security and entertainment markets in both the residential and commercial sector. Large and small innovative companies are entering the market almost daily.

As these technologies become ubiquitous, the ventures behind them are expected to look for incremental services to enhance their value. Trends toward rising fuel prices, increasing concern about resource depletion and climate change suggest more efficient energy management will be the next obvious step. The widespread adoption of technologies for energy management will then create a ‘customer pull’ toward investment in technologies to upgrade the existing electric grid, making it capable of responding in real time to shifts in demand. This, in turn, will allow for much more efficient decisions on where electricity is generated and how it is distributed, and allow the system to operate with less need for large spinning reserves.

While the report says that this is the optimistic scenario, it is important to note that the barriers to change remain high and most utilities are still driven by the desire to sell as many kilowatt hours of electricity as possible. Consumer-end electricity management does not advance that cause.

The biggest challenge will be to assure that the electricity company’s meter hanging on the outside wall of buildings will be linked real-time with the customer-owned building management system inside the wall. The ubiquitous IP-based commonality now becoming standard will make that easy to achieve at the right time. The immediate challenge is to make sure that the utility industry moves away from small-scale proprietary systems and embraces broader, interoperable IP-based protocols and approaches.

In the research a number of ‘business opportunity templates’ (BOTs) were identified that are believed to capture the emerging dynamics of the demand-driven electricity industry in the residential, commercial and network infrastructure sectors.

In the residential sector these are:

It is expected that, in two-thirds of the cases, offerings are likely to combine both levels 1 and 2. Market penetration for levels 3 and 4 may be more limited until more is known about the true potential for monetisable demand response in the residential sector. Also in most residential applications, it will be a choice between levels 3 and 4 when they occur.

In the commercial sector the BOTs are:

Types 1 and 4 are likely to be prevalent in both new and retrofitted applications. Type 3 BOTs will develop if large building owners and operators get sufficiently involved. Types 2 and 5 will be the ultimate BOTs but may take longer to deploy.

In infrastructure networks the BOTs are: 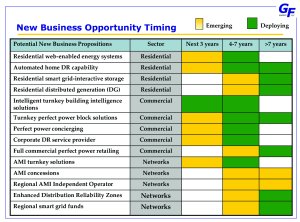 Companies involved in these BOTs, which could be expected to capture 30 to 40 percent of the new AMI activity by the early 2010s, will principally fall in the four main groups of network grid managers, project and software management companies, smart meter developers, and AMI infrastructure development and management companies.

These BOTs will follow different growths based on the specifics of their target markets (e.g. residential vs. commercial), the level of technology advances they assume (e.g. likely availability of better mesh wireless controls in the next three to four years vs. another seven to eight years to see increased and more cost effective fuel cells for DG applications), and their economic performance (e.g. several commercial building intelligence BOTs are already very attractive, while paybacks for residential energy home controls may still stay at the three- to four-year level for a couple more years). Based on the maturity level, need for incentives and potential impact, the projected timing of each BOT during the next decade is shown in Figure 2.

Considering the success and timing of the roll-out of various combinations of BOTs and the current status and future evolution of technological innovation, the report says that a growing number of homes will become equipped with webbased residential electricity management systems offered by a multiplicity of players including utilities, energy retailers, telecommunication companies or DR service providers. Market deployment will tend to emerge in those states with early DR programmes in place and with a focus on energy intensive residential applications.

It is estimated that by 2010, 30 million households will be equipped with home automation and it would follow that at least another 30 million homes also might be equipped in the following five years. These households will have the capability to network scores of consumer devices for entertainment, security, comfort and maintenance, as well as have the capability for electricity and energy management.

Currently 10 to 15 percent of households are declaring an interest in investing in automatic energy management. At first, the focus will be on lighting control applications. In the next few years, the deployment is anticipated of smarter, cheaper and more user-friendly IP-enabled thermostats tied to broadband routers and, thus, remotely controllable by customers, utilities and other DR service providers. It is also anticipated that some utilities will start pilot marketing efforts to sell thousands of smart thermostat units in their service areas. In parallel, it is expected that telecommunications and cable companies will offer systems as an adjunct to their services.

With the advent of networked energy management solutions and the increasing backing and involvement of larger players, the penetration of residential automatic energy controls could increase within 10 years to almost 20 percent. Web-enabled energy control systems also will be actively marketed by utilities once they have the right regulatory incentives in place.

A growing number of home builders are expected to sell electricity management systems as part of their list of features in new homes. More new homeowners will want to see an electricity management capability based on the results of what may already be established in the retrofit market. However, new home buyers will want to see that capability fully integrated with the balance of their home automation systems. About 40 percent of new home buyers are already opting for some home automation capabilities and that proportion is expected to increase to possibly 60 percent by 2015. This would mean a target market of some 10 million new homes between now and 2015.

Overall, about five to seven million new perfect powerenabled homes are foreseen to be built between now and 2015. Only a few hundred thousand may be equipped with energy storage or DG features, but the remainder will have electricity management systems that will provide reliable control over electricity usage and the ability to best tap that capability to take advantage of new DR programmes.

It is envisioned that by 2015, 60 percent of buildings will have a web-enabled electricity account monitoring capability set up and 40 percent may have web-enabled energy management. Initially the focus will be on buildings with floor areas greater than 14,000 square metres (50,000 square feet) but, as costs come down, the technology will become attractive down to the 4,500 square metre building size. 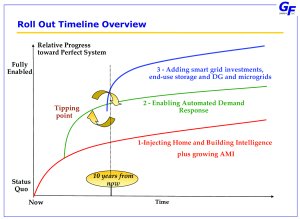 There are about 825,000 commercial buildings with more than 1 billion square metres of space, and some 15,000 buildings being added each year. New buildings also will become increasing targets for tailored power storage solutions, power concierging and full electricity account management options. However, there also will be a push for web-enabling retrofits of existing buildings. One interesting application, the report notes, will be the ability to submeter tenant space in leased buildings, particularly in buildings where tenant mix is diverse and with varying levels of power usage. Web-enabled submetering could achieve 25 percent penetration in the commercial leased space by 2015.

Microgrids in the range 1 to 10 MW could be economic in a range of situations such as office parks, new housing developments and co-op multi-family complexes. However, regulatory changes will be required, e.g. to allow private power lines to cross public rights of way, that have been difficult to achieve so far.

A rough estimate would indicate that there might be as many as 2,500 potential sites in the largest 35 to 40 urban or suburban service areas with electric rates above normal and where there are more than three to five buildings together. Based on the potential number of developers promoting microgrids, cumulatively there may be 175 microgrids in operation by the end of 2015, with a combined potential installed capacity in excess of 750 MW, and ongoing development of 40 to 50 projects per year.

The scenario above could result in a lot of progress being achieved over the next decade toward deploying a perfect power system, according to the report. In general such a deployment will involve three waves. The first wave will inject home and building intelligence through energy information and control systems. The second will enable demand response across end-use points. Finally, the third will build storage and DG, where they best fit (Figure 3).

In this context future investments are estimated of about $45 to 60 billion in smart home energy controls, commercial building intelligence, AMI and smart-grid technologies over the next decade. Such investments could yield between $14 and 22 billion in annual benefits by 2015.

According to the Galvin Electricity Initiative, a perfect power system is environmentally sound and fuel-efficient; robust and resilient; able to withstand natural and weatherrelated disasters and mitigate the potential damage caused by terrorist attack; and provides affordable electricity to all consumers, allowing them to control their own energy use to the extent they choose.