DEP is the water and wastewater utility for this worldclass city of seven million plus another million suburban users to the north. On average 4.54 Ml/day of water is delivered and 5.68 Ml/day of wastewater treated in 14 plants. In 2005 DEP began planning the systematic replacement of the approximately 400,000 residential meters installed in the early years of its universal metering programme (1988-1997).

DEP realised that if it was going to enter all those customer basements to replace meters it should take that opportunity to install AMR/ AMI equipment at the same time. A planned meter replacement programme began to drive a decision on AMR/AMI. DEP outsourced routine cycle meter reading to the local electric utility years before so reducing meter reading costs is only a secondary reason for pursuing AMR or AMI. A more important factor is that neither DEP nor the electric utility currently reading water meters has been able to move beyond an 85% actual read rate. 45% of DEP’s field inspection resources are spent trying to obtain verified reads during billing disputes. Advancing from 85% actual reads to over 95% was and is seen as key to improved collections, better water use data and a qualitative improvement in DEP’s credibility and customer service.

During 2006-2009 DoITT designed and built a citywide wireless system (NYCWiN) based on GHz-level frequency communications. Although designed mostly for first responder communications, the system has capabilities and capacity for improving wireless field communications for many city agencies, including data and graphics. Most importantly from the perspective of AMR/AMI, DoITT sited and leased more than 400 rooftop and pole top locations for the NYCWiN equipment. These locations have been used to site the data collection units (DCUs) for the AMI system with the DCUs using Ethernet connections to NYCWiN for data transmission back to a Network Operations Center. The Ethernet connection between the DCUs and NYCWiN allows the AMI system to operate in an “always on” mode. 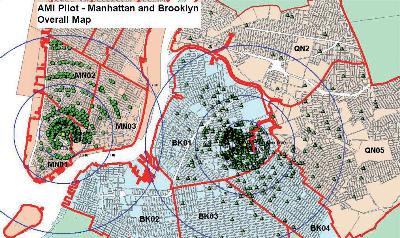 With strong support from a tech- nology savvy mayoral admin- istration, the project moved from business plan in 2006 to RFP release in May 2007 to a field pilot test of two finalist technology products during July to September 2007 to system contract award to Aclara RF Systems, Inc. in May 2008 and detailed design that same year. Replacement of the water meters and installation of the AMI MTUs is being performed through competitively bid contracts with the city split into 12 contract areas. These contracts were bid during the spring and summer of 2008. Northrup Grumman began installing the rooftop data collection units in November 2008 and will be complete by August 2009. Meter and MTU installation work began in March 2009 in phases.

MANAGING 1,500 MTUs A DAY
To meet a goal of substantial completion in three years about 1,500 MTUs will be installed and tested per day. Many earlier AMR and AMI projects were performed with relatively little automation and DEP realised that maintaining quality, providing contractors with timely feedback on the quality of their work, properly organising the work, updating the billing system and getting the contractors paid on time could only be attained with automation.

At the start the Star Network MTU programming and work order software normally used by installers of Aclara equipment was redesigned. Instead of manually entering much of the information about the property and meter, the installer now leaves the office for the field with a route of property and meter information, minimising the chances for data input errors. Water meters were ordered with bar coded serial numbers to avoid data entry errors for meter serial numbers. NYSTEC’s programming consultant, SVAM International joined with Aclara and DEP in designing a web-based application, MITS, allowing installation contractors to download a series of properties from DEP’s customer database into each handheld computer or specific properties for an appointment-based route. At the end of each work day completed work is uploaded into the MITS with the data being channelled to DEP’s billing system, the Star Network AMI servers and MITS’ inventory and contractor payment modules.

MITS also tracks inventory by incorporating electronic packing lists from Aclara and meter manufacturers Elster and Metron- Farnier and comparing serial numbers of the completed work uploaded by the installation contractor every day. The MITS application acts as a central project management tool and closes the workday loop by comparing the MTU serial numbers reported installed by an installation contractor with the MTUs, whose “wake up” signals and subsequent reads have been received by the Star Network server. This allows work to be quickly provisionally approved for payment since it is shown to be functional. Every morning each contractor has a dashboard report from the MITS application informing them of the number of successes and failures from the previous day along with the list of failures requiring corrective action.

The Star Network system MTU installation software has also been expanded to allow installers to record and report the source of problems that prevent them from performing a job (lack of access to a building, vacant building, deteriorated plumbing, etc.) and to report possible theft of service or properties that do not appear to be in DEP’s customer database. While DEP does not intend to use the AMI project as an opportunity to gather every bit of information about customer properties, it is difficult not to use the opportunity to collect at least the data immediately relevant to the project while scores of people are in the field.

REMOTE SHUTOFF
Aclara is planning a water MTU capable of two-way communications which DEP plans to use with remote shutoff valves for terminating service to small customers using the Aclara Star Network.

METER READINGS ON THE WEB
Before the end of 2009, DEP will provide customer access to meter readings, graphic displays of consumption and downloaded data through its website, integrated with information from the actual water/sewer bill. 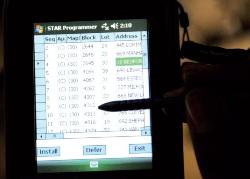 Selecting a property on the
handheld computer

A CHALLENGE FOR US WATER METER MANUFACTURERS
One of the lessons DEP has learned in the course of the AMI project is that the proprietary nature of most US meter manufacturers’ technology is an impediment to AMI/AMR. Registers that are easily compatible with AMI transmitters and that feed the meter serial number, meter size and other information to the transmitter would ease large-scale projects enormously.

A standard communications specification, such as the one recently developed in the UK, is worth a discussion among large users.

The implementation of AMI is a transitional experience. It holds the potential for better customer service, better financial performance and greatly improved water use data and price signalling. It is also a challenge for utilities and their suppliers: for field operations who will have less time to respond to failed meters or other problems, for IT organisations to manage rivers of data, and for meter manufacturers to develop and market products that complement rather than impede the development of AMI.