The New Energy and Industrial Technology Development Organisation (NEDO) has announced that they have selected Hitachi, Sumitomo Mitsui Banking Corporation and the Japan Research Institute to undertake a feasibility study for a smart grid demonstration project. The project is one of NEDO’s demonstration projects of international energy consumption efficiency technology and systems in Poland. 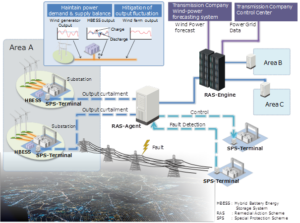 The preliminary survey will include site selection, determination of which Polish businesses will participate and the scope of each sub-project.

The demonstration project aims to build a grid stabilization control system that can both, minimize capital investment in the electricity infrastructure, and maintain stable grid operation. It will also determine ways expand the use of renewable energy in Poland by adopting Japan’s advanced technology for grid stabilization together with energy storage systems and control techniques for the real time curtailment of wind power output.

The currently planned activities of the demonstration project are as follows.

This project aims to mitigate short-term fluctuations in the output of wind power generation during normal operation, and to utilize electric power that would otherwise go to waste during times of low electricity demand by using the excess power to charge energy storage systems.

This project aims to demonstrate SPS-based grid stabilization technology that operates automatically to curtail the output of wind power generation and perform grid control when an overload occurs on a transmission line due to a grid fault or other reason.

The Japan Research Institute will conduct the preliminary survey and demonstration project to study business models by identifying the stakeholders in SPSs and energy storage systems, and the benefits of their use. It will also study some issues such as support for policy making aimed at improving their economics, and measures for standardization that will enable further penetration. Sumitomo Mitsui Banking Corporation intends to explore various financial structures.

As a member of the EU, Poland is increasing its wind power generation capacity to meet its ambitious target of supplying 15% of its electricity from renewable sources by 2020, and increasing this to 19% by 2030. Its installed capacity of wind power generation in 2013 was approximately 3.4GW, roughly half the 2020 target of 6.6GW. On the other hand, the country’s electricity infrastructure is aging, with more than 50% of it having been constructed more than 40 years ago. Accordingly, it will be necessary to take steps; including upgrading and enhancing this infrastructure, in order to deal with this problem and to cope with the additional load that the installation of a large amount of wind power generation will impact on the power grid. Since this upgrading and enhancement will require major capital investment and will impose significant management challenges, there is growing interest in the use of Japanese technology for grid stabilization that can maintain reliable grid operation while also minimizing capital investment in parallel with achieving the targets for installing wind and other forms of renewable energy generation.