CEMIG has defined in its strategic planning for the coming years, the introduction of a new technological level applicable to corporate computer systems, telecommunications, facilities and equipment for all the processes that require automation (operations, maintenance, marketing, energy planning, etc). This definition is formalised in the strategic map of the company, aimed at increasing operational efficiency and reducing technical and non-technical losses.

Motivated by the great “black out” that occurred in 2003 afffecting eight American states and one Canadian state, with an estimated loss of US$13 billion and the failures identified as due to “poor practices” and the lack of information in a timely and adequate manner, the Energy Power Research Institute (EPRI) established a study group with representatives from energy companies and suppliers. This study led to the definition of a new model of an electric company, mapping all its processes and defining the use of best practices, based on “case studies” and on international standards, as well as the use of market patterns. This new model was named the Intelligrid architecture, with the following premises as its vision: 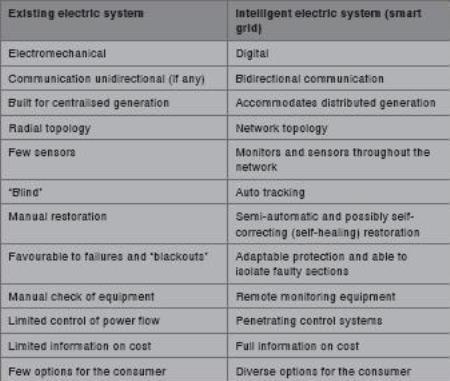 Several IT systems should be considered: Supervisory control and data acquisition (SCADA), customer information system (CI), geographic information system (GIS), workforce management system (WMS), outage management system (OMS), and AMI among others, which can be identified within the environment of CEMIG. For circumstantial reasons, the exchange of information between these systems is, in most cases, developed through individual solutions, on a case by case basis, and implemented in an unplanned and unstructured way in a macro scenario.

Being based on the production, use and exchange of information, the Intelligrid architecture is completely dependent on an efficient telecommunication infrastructure. As noted above, communication must be bidirectional in all instances, so that actions – not just a knowledge of the system, but also the opportunity to act on it – are feasible.

The telecommunications sector in Brazil has been undergoing major changes in recent years. These include developments in terms of both technology and scope. Several government programmes (both state and federal) are moving towards digital inclusion, which means that this large network becomes increasingly cheaper and more available. Culturally, the power companies do not utilise the public telecommunication systems for their critical processes for reasons of availability, security and limited management. However, new technologies now permit all these factors to be properly addressed and guaranteed through service level agreements, quality of service techniques, and channel and availability redundancy, and bring to the networks the desired level of exclusivity.

Substations should be linked by communication channels with standard TCP/IP, ie a data network rather than low-speed links. These channels must be shared with other systems installed in substations, such as oscillographs, frontier metering, remote maintenance, remote protection adjustment, and even voice-over IP (VOIP) for telephony. However, this is not the main point raised by the Intelligrid architecture. For substations, the watchword is the IEC 61850 standard, which defines an architecture (subarchitecture) for integrated systems for automation, metering and protection within a substation.

The automation of distribution networks was viewed until recently, only as a “remote control” for driving equipment. It was an expensive and sometimes impracticable solution, particularly in terms of communication, when this was the only return expected. However, with the new concept of intelligent networks and the growth of initiatives directed at the consumer, integrated solutions for automation have begun to aggregate a number of other functions on line. This pool of resources, together with a significant reduction in costs of communication, have resulted in projects becoming more viable.

CEMIG, along with other distribution companies, has been following the development of metering automation projects being implemented in various countries. Generally speaking, it is the technical areas that identify projects, technology, and the regulatory and economic conditions that make possible the implementation of automation, even if partial, and that allow planning of the next steps to fully achieve the philosophy of the Intelligrid architecture.

In a general analysis, the major differences between the Brazilian environment and countries where automation is more advanced are the costs and the financing conditions. In Brazil, there are needs still that are not present in other places, such as remote disconnection and reconnection in poorer areas in which security problems make it difficult for a field team to work. Thus, so far metering automation in Brazil has been restricted to frontier metering, generators and large customers.

Other experiences for low-voltage customers are bogged down in regulation and political action in low-income areas, where external metering, with electronics and remote access, is being installed as the latest step to tackle fraud and illegal connections that can cause non technical losses of up to 65%. The horizontal tariff for LV customers is also a strong influence on the issue.

Within this context, CEMIG decided to contract a consulting company with international experience to assist with the following points:

Currently, CEMIG is starting the implementation of projects that fall within the concept of total automation, but currently all efforts are concentrated on actions that bring increased operational efficiency, either by reduction of costs, increase in billing, or reduction of non-technical losses.

The main benefits expected by CEMIG, with the range of targets directed toward its network of intelligent energy, are:

All these benefits contribute to the aggregation of value and economic, social and environmental sustainability, in addition to the satisfaction of customers and other stakeholders, resulting in an efficient use of the electric system.

To achieve these goals, the basic premise is to avoid disruption of activities in progress, and aim to fit them into the recommended concepts of the Intelligrid architecture. For new projects (vegetative growth), the requirements and recommendations of the architecture can be followed. There are also specific projects in the architecture, such as the deployment of a middleware server, a data warehouse, and studies on cyber security.

The vision of the future of CEMIG’s intelligent energy network includes distributed generation, where the flow of energy occurs in two directions at the consumer level.

It is expected that there will be greater involvement of consumers through multi-tariffs and demand control. The participation of the regulator is essential. It is necessary to create mechanisms to stimulate and encourage this new reality, with a significant expansion of discussion on the theme of intelligent energy networks.

It is also important to build a vision of what an intelligent network is. Each company must go through a process of assimilating that concept, considering its own reality. CEMIG believes that achieving an intelligent network is a long-term process, built step by step in an integrated manner. It is essential to involve the whole company, including the support of the top management of the company.