But new research suggests the situation may have changed. According to the latest World Energy Retail Market Ranking report, which ranks world energy retail markets by the level of customer switching activity, Victoria in Australia is now the hottest energy retail market in the world with almost one in four utility customers switching suppliers in 2006. This shift has relegated the formerly preeminent energy market Great Britain to second place.

The report is published by the Utility Customer Switching Research Project, which was founded jointly by global outsourcer of utility billing and payment transactions services First Data Utilities and energy think tank VaasaETT. Further calling into question the European leadership in utility liberalisation, the report reveals that out of the world’s top seven energy retail markets – Victoria, Great Britain, South Australia, Texas, Norway, New South Wales and New Zealand (Figure 1) – only two can be claimed by Europe. This is in spite of the fact that at least 15 European energy retail markets are considered open to competition. 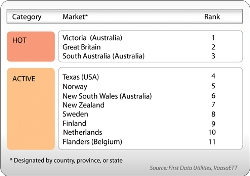 Does this drop in ranking mean that switching in Great Britain is in decline? While a fall in its ranking might seem to imply that the British market is floundering, customer switching activity in Great Britain is in fact at its highest level. Over 20 percent of British customers switched gas or electricity supplier during 2006. There has been no reduction in competitive activity and there is no sign that energy retail competition in Britain is in decline. The cause of Britain’s drop in ranking is simply that customer switching activity in other markets has accelerated faster. In fact, nine “active” rated markets, with switching between five and 15 per cent, have been open to full retail competition for at least five years, and all of these except one have shown an upward trend in switching in the past year.

Victoria opened to full retail competition for gas and electricity in 2002 and, after a slow start, experienced a rapid increase in customer switching activity, making it the single most active energy retail market in the world today. The graph in Figure 2 shows this acceleration in switching activity and how it has led to Victoria overtaking Great Britain in recent times. Closely following Victoria and Great Britain is another Australian market, South Australia, which opened to full retail competition in 2003, a year after neighbouring Victoria. 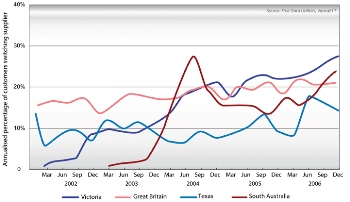 The top three markets are classified as “hot” by the report because they exhibited annualised customer switch rates over 15 per cent. Amongst the drivers of competitive retail activity in these “hot” markets are the separate ownership of retail and distribution utilities, and the support for both electricity and gas competitive retail supply. This enables utilities in these markets to offer dual fuel products and crosssell both commodities to consumers who previously had to deal with separate electricity and gas suppliers.

It is well known that utility industry deregulation stalled in the USA in the wake of the collapse of Enron and wholesale energy trading problems. As a consequence, many people would not expect to see much of significance happening in America’s energy retail markets. However, another landmark in energy retail success is Texas, ranked as fourth most active and ahead of all continental European markets. The Texas market opened to full retail competition in 2002, at the same time as Victoria, and is the only US market to require separation of incumbent utility retail operations from distribution. The research shows strong customer switching activity in Texas, which is in stark contrast to the minimal activity in other states such as New York, Pennsylvania, Ohio and Maryland that employ a regulated-competitive hybrid market structure.

In recent years, new entrant mass market retailers have been achieving large scale success in the Texas market. Over 30 energy retailers are active in the Texas market, from the big incumbent suppliers TXU Energy, Reliant Energy and Centrica’s Direct Energy, to niche industrial and regional operators. The sheer number of energy retailers active in Texas provides a vivid counterpoint to the belief often held in Europe that utility retail markets inevitably consolidate to five or six major companies within a few years. New utility companies enter the Texas market on a regular basis. New entrant mass market energy retailers Gexa Energy and Stream Energy now boast substantial market share, which they have each grown organically from a zero base.

WHAT PROMPTS SWITCHING?
When discussing the success of energy retail competition, the subjects of prices and savings are never far away. It is an often-heard argument that utility customers are only interested in price, will only switch supplier for savings, and that customers already receiving low priced electricity will have little interest in switching supplier. In this context, a comparison of the retail price levels found in the most active energy retail markets is useful. Are the most active markets in fact those with the highest prices, where consumers can gain the greatest savings from switching supplier?

International Energy Agency data shows that the average price of electricity for a household in Britain is €0.11 per kWh. Texan consumers pay on average €0.10 per kWh. In Australia, the home of the number one and number three ranked markets, households pay on average just €0.07 per kWh. Victoria’s number one ranking and its low prices establish that it is untrue that low priced markets can not sustain competition and untrue that consumers already paying low prices have no motivation to switch suppliers.

VaasaETT research reveals that there are many reasons other than price that prompt consumers to switch energy supplier. They evaluate the calibre of their utility supplier not just against the traditional utility focus of reliable supply, but against the level of service they receive from their other service providers, which might include mobile phone companies, banks, or on-line music or book suppliers.

Conversely, some of the key barriers inhibiting competition in open but inactive markets include the lack of intensive direct marketing or strong, autonomous, competition-oriented regulators, incumbent price matching, customer unawareness, overwhelming incumbent privileges, price stability and low regulated prices, state interests in incumbents and the status quo, and the absence of effective unbundling of retail, distribution and generation.

These insights arise from the observation of events and consumer behaviour in the world’s most active competitive energy retail markets. The most successful energy retail markets exhibit many of the switching drivers discussed, whilst avoiding the pitfalls which have hindered competition in other markets. It can be argued that these key factors form the basis of a recipe for successful retail competition. To request a copy of the World Energy Retail Market Ranking report, please visit www.firstdatautilities.com/customer-switching.