Plug-in electric vehicles, which have captured the attention of the public and the media, will play an important role in the energy future of the United States. Widescale adoption of the vehicles offers the possibility of reducing fossil fuel consumption and greenhouse gas emissions while simultaneously delivering greater energy independence and improving the economics of the electricity industry.

Numerous assessments by the nation’s leading research institutions, from the National Renewable Energy Laboratory (NREL) to the Pacific Northwest National Laboratory (PNNL), support this optimistic outlook for the impact of plug-in vehicles. In fact, the NREL has concluded that “no additional capacity would be required for even a massive penetration of plug-in hybrid electric vehicles (PHEVs),” and the PNNL asserts that “84 percent of the cars, pickup trucks and sport utility vehicles (SUVs) could be supported by the existing infrastructure, suggesting a gasoline displacement potential of 52 percent of the nation’s oil imports.”

Key to this transformation is a 21st century electric grid – reliable, robust and able to respond rapidly to real time information. To date, plug-in vehicle studies have all made the critical, yet under emphasised, assumption that the charging behaviour of these vehicles, and thus their impact on the existing grid, will somehow be controlled. The NREL suggests charging will occur overnight, the PNNL assumes the entire plug-in vehicle load will be “managed to fit perfectly into the valleys of load demand without setting new peaks,” and the Electric Power Research Institute (EPRI) asserts that plug-ins will significantly reduce greenhouse gas emissions given the existence of “programmes to actively manage the charging load.”

Until recently, the ability to control the timing and pace of plug-in vehicle charging and discharging had remained a tacit assumption – undefined, yet essential, to the successful widescale adoption of plug-in vehicles. Left unmanaged, even small clusters of vehicles charging at peak periods could significantly stress already overtaxed distribution systems and require major infrastructure investments. Now, smart grid technology has made smart charging, the ability to manage the flow of electricity from the grid to the vehicle, a reality. 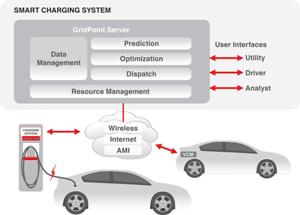 THE PROMISE OF A 21ST CENTURY POWER GRID
Today the grid is challenged by ever increasing demands and an aging infrastructure. The success of smart charging trials is one of many indicators that the grid can be transformed by advanced networking, communication and automation technologies. Smart charging capabilities allow plug-in vehicles to become important grid assets, representing manageable load, low cost storage for renewable energy, and in time, a potential source of distributed generation.

Long recognising the significant value of electric vehicles, GridPoint last year acquired V2Green to further enhance its platform and its corresponding benefits to utilities. GridPoint provides an intelligent network for distributed energy resources – from solar panels and wind turbines to household devices such as thermostats and pool pumps – that can be managed to increase efficiency, reliability and adoption of renewable energy, as well as reducing or eliminating the need to build new power plants. Such technologies offer utilities a comprehensive smart grid solution for the 21st century.

ELECTRIC VEHICLES HITTING THE ROAD AND THE GRID SOON
Many leading auto manufactures have announced plans to introduce plug-in electric vehicles as early as late this year. Consumer interest in plug-in vehicles – initially driven by concern over climate change and now also fueled by a desire for energy independence and fluctuating gasoline prices – continues to grow. Utilities are working to establish strategic plans prior to plug-in vehicle availability. Given that each grid has unique challenges and constraints, particularly at the distribution level, more and more utilities are initiating smart charging trials to inform their planning process with real world experience and data.

Utilities are also beginning to consider how best to engage their customers in smart charging programmes. Providing drivers with the ability to set parameters for when and where their vehicle’s charging behaviour can be managed is clearly critical, as is the opportunity to override those parameters if necessary. Enticing vehicle owners to participate through economic incentives and customer friendly electric tariffs is also likely to be essential. In urban areas, utilities with adjoining service areas will need to explore the billing and operational requirements of supporting plug-in vehicle “roaming.” Many plug-in vehicle owners will charge their vehicles at home in one service area, then commute to work and connect to the grid in a different service area. Structuring inter-utility data exchange to accommodate this charging behaviour is one of many that utilities must take into account in their planning. Planning for additional trials, designed to gather driver feedback and better understand owner requirements, are underway.

PUTTING SMART CHARGING THEORY INTO PRACTICE
Seattle City Light
In Seattle, the largest PHEV field trial to date is underway. In addition to its own vehicles, Seattle City Light has recruited Priuses from the City of Seattle, the Port of Seattle, King County and the Puget Sound Clear Air Agency to the trial. A total of 13 vehicles are being converted to PHEVs and equipped with GridPoint’s technology to establish two-way communication with the grid and facilitate smart charging.

Seattle City Light is eager to understand the effect plugin vehicles will have on its urban grid. In designing the smart charging trial, the company has the opportunity to explore several scenarios, including peak vs. off-peak charging, location specific charging and overnight valley filling as envisioned by the PNNL. Additionally, Seattle City Light will be able to incorporate external signals, such as wind, system regulation or real time pricing, allowing them to assess the value of adaptively managing the timing and pace of vehicle charging in response to real time grid conditions. The goal of the year-long trial is to demonstrate that new plug-in vehicle load can be effectively managed, protecting the distribution system and avoiding the need to buy power.

Duke Energy
Duke Energy, working with GridPoint, conducted an early commercial trial of smart charging in March 2008. Employing a wall outlet in a residential garage controlled by the GridPoint Platform, Duke delayed flowing energy to a PHEV plugged in just as the evening demand for electricity began to build. Charging was initiated at 10 p.m. and was completed prior to the morning peak, leaving the car fully charged for the driver’s morning commute. By successfully shifting the charging load into an offpeak period, the test clearly established smart charging as an essential capability for utilities.

Xcel Energy
In its PHEV demonstration project, Xcel Energy is exploring charging management in real world circumstances. Six Ford Escape hybrids have been converted to PHEVs and equipped with onboard communication devices from GridPoint. These devices, part of an integrated client server solution, establish intelligent, two-way communication with the grid and allow Xcel Energy to control, in real time, the PHEVs’ charging behaviour anywhere in their eight state service area. One of the Ford Escapes has also been equipped for vehicle-to-grid (V2G), an emerging technology allowing energy to be returned to the grid when needed.

The vehicles are deployed in real life driving conditions, in varied geographic regions and climates. Company employees are serving as test drivers, using three of the PHEVs as their personal vehicles. The remaining three PHEVs are deployed in the company’s fleet. Over the course of the demonstration, Xcel Energy will use the smart charging technology to adaptively reduce or increase vehicle charging to match grid requirements, exploring the potential of utilising PHEVs as storage devices for renewable energy and in the low cost production of ancillary services.

Xcel Energy’s goal is to determine the ability of plug-in vehicles to minimise greenhouse gas emissions while enhancing energy security by reducing dependence on foreign oil. Additionally, the utility will evaluate the impact of charging control on grid stability and the opportunity to successfully deliver peak shaving, firming of renewables and ancillary services such as system regulation and spinning reserves.

The PHEV demonstration project is part of Xcel Energy’s larger strategy to design a smart grid, as currently demonstrated by the Boulder-based SmartGridCity project, which will more easily allow customers and energy providers to work together to balance and stabilise the power grid.

Austin Energy
Nationally recognised for its advocacy of plug-in vehicles, Austin Energy has also initiated a pilot project to assess smart charging technology. The goal is to establish the impact of plug-in vehicles on the operation of a smarter electrical grid and determine the ability of PHEVs to maximise use of renewable energy. To this end, synching vehicle charging behaviour with the availability of wind power flowing overnight from West Texas has been emphasised in the trial design. Two PHEVs, converted Toyota Priuses from the Austin Energy fleet, have been equipped with GridPoint’s smart charging technology and enrolled in the trial. With communication established between the vehicles and the grid, Austin Energy is able to successfully shift the charging load into off-peak periods and centre overnight charging to coincide with the typical profile of peak wind availability.

Austin Energy operates the most successful utility sponsored green power programme in the United States. Representing 743 million kWh, the utility’s GreenChoice® Program delivers electricity generated from renewable sources to subscribing homes and businesses. With an eye to the future, Austin Energy’s PHEV pilot project is preparing the utility for the day when their customers begin driving electric vehicles. By managing when charging behaviour occurs, Austin Energy could easily be “fueling” transportation in the City of Austin with clean, renewable energy, while minimising the impact of the added load on their grid infrastructure.

LOOKING AHEAD
While plug-in vehicles hold great promise, we must have an infrastructure that’s ready to support them. “Smart grid technologies are going to be essential if we’re going to maximise the potential of plug-in electric vehicles,” wrote Sen. Maria Cantwell in an op/ed prior to the National Smart Grid Conference she hosted in April in Spokane, Washington. “As we develop new plug-ins and other modes of transportation, we’re going to need a much smarter grid to accommodate their use, lower driving costs and greenhouse gas emissions.”

Utilities are continuing to test the technology; this year Puget Sound Energy, BC Hydro, ComEd and Con Edison will be initiating plug-in trials. Government must also develop programmes and incentives that help electric utilities quickly adopt information technology to the power grid. The $2.4 billion in stimulus funds recently allocated with the goal of helping to get more plug-in vehicles on the roads is a very encouraging and welcome step.