Ontario’s provincial government recently passed groundbreaking legislation that will enable the implementation of smart metering to the province’s residential and small businesses electricity consumers. This government initiative represents one of the largest ‘smart’ meter deployments in North America. As the industry players responsible for owning, installing, operating and maintaining electricity meters, Ontario’s 90 electricity distribution companies have assumed a central role in laying the groundwork for smart meter implementation in the province. The Electricity Conservation Responsibility Act was passed on February 27, 2006, and provides the government with the flexibility to determine the best options for the governance, ownership and regulatory structure of Ontario’s smart metering initiative.

It will see the installation of close to 4.5 million smart meters in every residence and small business in the province by 2010, with the first 800,000 meters installed by 2007. Although legislation has been passed, many operational and regulatory details on the installation and management of smart meters remain to be formulated. Further clarification will come through regulations that will flow out of the legislation to address a number of outstanding issues. With this in mind, Ontario’s electricity distributors believe that the success of smart meter implementation will ultimately depend on a clear and common understanding of responsibilities to be carried out by each of the players involved, including government and regulators. The province’s distributors are keenly aware of the importance of preparedness in such a large-scale initiative.

Through co-operative industry planning, distributors have been laying the groundwork, determining which meter technologies address the geographic uniqueness of the province’s regions, and testing data and communication technologies through smart meter pilot projects. The expertise and experience that distributors are bringing to the table will go a long way towards ensuring a smooth and successful deployment.

CREATING A CULTURE OF CONSERVATION IN ONTARIO

It’s helpful to take a step back and put Ontario’s smart metering initiative into a context that aligns with current government energy policy. In Canada, provinces have jurisdiction over laws relating to the development, conservation and management of sites and facilities for the generation and production of electrical energy. The provinces also regulate consumer electricity prices, generation, transmission and distribution. In Ontario, the Ontario Energy Board (OEB) – an independent, quasi-judicial tribunal – reports to the Legislature through the Minister of Energy. It operates independently from government departments and regulates all market participants in the province’s natural gas and electricity industries.

As is the case in many jurisdictions around the world, creating a reliable and sustainable electricity supply to meet steadily growing demand has meant greater attention to energy conservation and the significant impact of conservation measures in curtailing demand. Ontario’s smart meter initiative is part of a broader government commitment to create a culture of conservation in the province, designed to address peak demand issues and the ongoing strain on the province’s electricity supply. Ontario is at a critical juncture – the electricity system has less capacity today than it did twelve years ago, and demand continues to increase as a result of an expanding population and steady economic growth. In a recent report that looks at Ontario’s Supply Mix, the Ontario Power Authority (an independent authority in charge of electricity system planning in the province) estimated that there will be a gap in electricity supply of approximately 24,000 megawatts by 2025.

This is equivalent to about 80% of the province’s current capacity. Building new and renewable generation is an important part of the solution, but it is not the only approach to addressing Ontario’s energy challenges. Just as importantly, the government has looked to the province’s electricity distributors to play an integral role in the promotion of electricity conservation. In addition to the role electricity distributors are playing in the implementation of smart metering, they are also a driving force behind conservation and demand management activities that are providing hundreds of millions of dollars in programmes and education to help customers conserve. Ontario’s distributors believe that Bill 21, the Energy Conservation Responsibility Act, is the next step creating a conservation culture in the province. 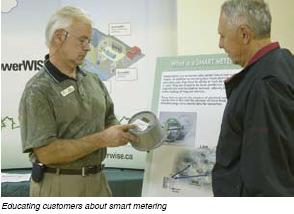 Currently, most Ontario homes are equipped with a meter that only measures how much electricity was used by the customer in a billing period, typically one or two months. The smart meter will be able to record not only how much energy was used, but also when it was used. This will allow for the introduction of different electricity rates for different times of the day and should encourage customers to regulate their own usage of electricity during peak times. With a supporting pricing plan, the new meters will provide a tool that electricity consumers can use to respond to price signals.

Once customers are equipped with the new meter technology, they will be able to better manage their electricity use by making choices based on cost signals for on-peak, mid-peak and off-peak periods. Smart meters are intended to provide electricity consumers with the ability to monitor and better understand their day-to-day electricity use. It is hoped that smart meters will also enable the development of new smart appliances and allow co-ordinated utility control of large appliances such as air conditioning. Ultimately, it is about changing consumers’ behaviour patterns in electricity consumption and advancing a culture of conservation in the province.

As presented, the new legislation has been written to maximise the flexibility of decision-makers in determining the design details of the smart meter system. It begins the process of determining the activities of the parties that will be involved in the delivery of the government’s initiative. The historical role of Ontario’s distributors to own, install, operate and maintain the new meters has been recognised by the government, although this has not been captured in the language of the legislation.

The distribution industry continues to advocate for the inclusion of language that recognises the critical role electricity distributors will play in this initiative. Importantly, Bill 21 puts in place a framework for the recovery of costs related to smart meters, including the recovery of stranded meter costs, or legacy assets. And just as significantly, it allows the government to issue directives to the Ontario Energy Board that will allow for the recovery of costs associated with meter deployment. Ensuring that the proper cost recovery mechanisms are in place as the smart meter initiative proceeds remains a central consideration for Ontario’s distributors. Many of the operational and regulatory details of how meters will be installed and managed remain to be formulated. These details will be released through regulations that will flow out of the legislation in the coming weeks and months.

Although proposed metering specifications have been released, the industry is waiting for a number of critical decisions, including details on communication systems, and clarification of the responsibilities to be assigned to a new entity created by the legislation, and known as the Smart Meter Entity (SME). Legislation authorises the Smart Meter Entity to “collect information and data relating to the consumption or use of electricity from consumers, distributors or any other person,” directly or indirectly. It is also authorised to manage and aggregate data related to consumers’ electricity consumption or use. At this time, the role, structure, and boundaries of the SME need to be clarified. The role of this entity remains a critical component of the smart meter system design and will help determine how various pieces of the system will ultimately integrate. As the process unfolds, electricity distributors are looking to have three key issues addressed and clearly defined:

1. What the basic design of a smart meter system/data pathway will be.
2. What particular communication assets and functions distributors will have the right to own/control.
3. What exactly the responsibilities of the SME will be.

Ontario’s distribution industry continues to advocate that consistent government policy and appropriate regulation that supports implementation are fundamental to realising the success and sustainability of the initiative.

Electricity distribution companies have worked together in industry groupings to tackle key operational and regulatory issues, including the more technical aspects of functionality and meter data standards. This co-operative approach has provided greater efficiencies, and allowed the sector to develop best practices through a collective approach to testing on smart meter pilot projects. Over forty pilots were undertaken in the province through 2005. Just as importantly, key industry partnerships between distributors and metering companies are bringing together the technology and communications to support and facilitate full integration of smart metering in Ontario. Government can leverage these findings and the data collected through smart meter pilots to advance the smart meter implementation framework. Ontario’s distributors are working with government decision-makers and regulators to facilitate this exchange of information and expertise.

The passage of new government legislation is a step forward for smart meter implementation and for conservation efforts overall in the province. At this point, we can be assured of one thing – key industry players are going to have to work together with determination to meet the timeline of full deployment by 2010. We will be able to achieve the best results in the shortest time by continuing to foster a working partnership with electricity distributors, government and regulators. Ontario’s electricity distributors are welcoming the opportunity to work with government to facilitate the full implementation of this important initiative in the province. New legislation to further enable the smart meter initiative is a critical step forward to achieve this end. If implemented successfully, it could position Ontario as a leading proponent of smart metering and conservation worldwide. There is little doubt that jurisdictions, particularly in the United States, are watching Ontario’s progress closely as the province formulates a final implementation plan to facilitate the deployment of this wide-scale venture.