To stimulate the rollout of smart meters across Europe, the European Smart Metering Industry Group (ESMIG) supports the initiatives intended to improve the interoperability of components. ESMIG has adopted a set of open standards (originating in the European Commission) to which members’ products must comply. These standards will allow the competitive development of applications from various sources, creating business models for industry stakeholders, including consumers.

Complying with open standards is a basic condition, but in itself is not sufficient to achieve the interoperability required. International standards leave room for further configuration to function within various architectures of EU member states. This article describes the additional measures needed, such as the selection of technologies, definition of optional features and process of data exchange between the advanced metering infrastructure (AMI) components. ESMIG proposes to position such standards in a pyramid with unified standard data models at the top and various alternative technologies (such as RF and PLC technology standards) at the base. 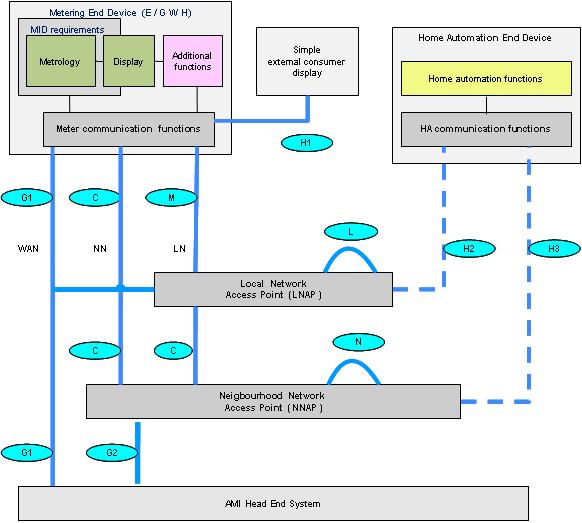 Interoperability, 1st degree
To achieve interoperability, it is often not sufficient for suppliers of meters and components, etc. just to meet the agreed EU communications standards. Such standards are intended to apply to various architectures used across Europe. These standards often contain a wide range of functions, options and free data fields, which are not necessarily always used. To ensure a first degree of interoperability, project specific companion specifications will be required, which specify the required standards and how to use free data fields.

The choice of upper protocol layer and data model standards can be made at both regional and international levels. Lower protocol layer standards choices can be made at national or project levels. Interoperability will of course be confined to the same respective level. The most practical situation would be to define a "pyramid" of standards: the top layer for the data models, those in the middle for data formatting and transaction definitions, and those at the bottom to define the use of various technologies on different (wired and wireless) communication media.

Conclusions
The basis of the ESMIG approach is the definition of open standards to which we adhere. Members’ products will comply with this definition.

ESMIG fully supports international standardization up to the level that is needed to reach real interoperability.

The communication standards will be positioned in a pyramid of standards with unified standard data models on top and various alternative technology standards at the bottom.

The approach towards interoperability will be phased and covers both international and national levels.