Smart metering represents the extremity of a more modern infrastructure of the electrical sector, offering many advantages to consumers, distributors and regulators. Applied to the low voltage level, this technology let consumers play a more active role in the electricity market and enables better management of consumption and of the quality of the service provided by the distributor.

Networks operators also gain benefits as the technology allows faster fault detections and a real time management, besides enabling the reduction of operational costs and of non-technical losses. Smart metering also induces more efficient use of the system as it enables the application of time-of-use tariffs.

Facing all these possibilities, Brazil’s electricity regulatory agency, ANEEL (Agéncia Nacional de Energia Elétrica) has already shown interest in studying the subject and in creating the necessary conditions for the correct development of such an infrastructure. In the first semester of 2009, ANEEL also launched a public consultation on the implementation of smart meters for low voltage consumers.

Brazil faces different realities from those countries that have already opted for the widespread use of this technology at the low voltage level. When studying the applicability in Brazil, it is necessary to be aware of those characteristics and of the eventual adaptation needs.

THE BRAZILIAN CASE
In Brazil, there are about 63 million consumer units and a number of them are already serviced by electronic meters. By the end of 2008, 22 of the 63 distribution companies, with responsibility for around half of the electricity market, had already decided on the exclusive acquisition of electronic meters (ABRADEE, 2008). 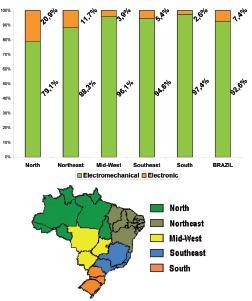 The proportional use of electronic meters by region in Brazil is shown in Figure 1.

The more than 4 million electronic meters installed in Brazil were acquired mainly due to their costs having become cheaper than the conventional meters or as an action against non-technical losses and the reactive energy excess. The use of additional functionalities is restricted to small pilot projects. Compared to Europe and North America, Brazil has a low consumer concentration and a low load density. As an example, Italy has half the number of consumers concentrated in an area 15 times smaller, while in England the consumers are 57 times more concentrated than in Brazil. Consequently the costs of an eventual large scale substitution of electronic meters would be high.

The climatic diversity found in Brazil also can represent a problem, although manufacturers declare differently. The meter behaviour can vary according to the weather and the useful life could be distinctly different depending on the location of installation. This makes the task of defining a regulatory useful lifetime quite complex.

Furthermore, the typical Brazilian consumer registers an energy consumption much lower than their European or North American counterparts. In Brazil, the average residential consumer uses about 144 kWh per month, while in the United States and in Europe the monthly consumption reaches levels of about 960 kWh and 410 kWh respectively (EPE, 2008).

As the investments for an eventual large scale rollout would be funded by consumers, who generally consume less than the consumers of those other countries, the impact on Brazilian electricity tariffs would be relatively greater.

However, the main difference between Brazil and most of the countries which have decided on large scale rollout lies in socioeconomic factors. In Europe and North America, the substitution was motivated by the need for energy conservation and peak demand control, in addition to the necessary reduction of operational costs of the distribution companies.

Like Northern Ireland, South Africa and the north of Italy, the main reason for the use of smart metering in Brazil is the reduction on energy theft, and the more efficient usage of the electrical system is regarded as a secondary benefit. Due to non-technical losses, Brazil wastes 6.71% of its generated energy, corresponding to 18,515 GWh per year. In effect the Santo Antônio hydroelectric plant, on the Madeira River, is working just to compensate this level of losses. 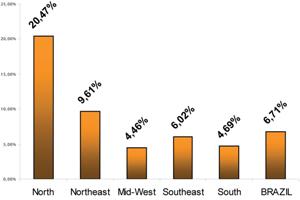 The distribution of the losses per region is shown in Figure 2. Of the electronic meters installed in Brazil, about 405,000 units have been installed using the technology called the Centralised Metering System (CMS, ABRADEE, 2008). This system consists of electronic modules integrated to metering purposes, executing the functions of concentrating, processing and indicating the information on consumption in a centralised way. In the CMS, the meter is installed externally to the consumer unit with an information terminal inside the unit. The meters are located on the electricity distribution poles, interconnected to a communication structure that concentrates the measurements of various consumers.

PERSPECTIVES AND CHALLENGES
In the new metering scenario, information and data communication technologies are integrated to the conventional distribution system, resulting in new perspectives to the service and, consequently, in new aspects to be regulated.

International experience shows that the lack of regulation on smart metering can hinder the widespread usage of these meters at the low voltage level. Aspects such as the obligation and the way meters should be installed, recovery of the investment, the parameters that will be measured, and the meter lifetime are examples of issues that bring uncertainties to the utilities and that need to be evaluated by the regulator.

One of the main points highlighted by ANEEL in its public consultation is whether it is necessary to have a regulatory definition of a large scale rollout plan in Brazil or if it should be simply a commercial decision of the distributors. In some countries (Canada, Spain, Italy, etc.), the regulator decided on the compulsory use of the technology. However, in Sweden, for example, there was not a determinative command, but the regulator imposed measurement requirements for consumers that could be complied with only with an electronic meter.

In New Zealand, the regulator established a public consultation to initiate a debate on smart metering and to solicit input. At the end of the process, it was decided that just the basic directions for the implementation of those metering systems would be indicated, with minimum procedures on the process. Thus, large scale implementation was not initiated by a decision of the regulator, but as a business option.

If it is necessary to determine a substitution plan, considering the number of meters to be substituted in Brazil (about 63 million), ANEEL has to analyse and define a proper time schedule for the rollout. The coverage is another challenge. The analysis should also evaluate if all low voltage level consumers should have their meters replaced, or just those with more than some level of monthly consumption.

Another aspect that should be analysed is the set of functionalities. Generally, the more functions the meter offers, the greater the potential benefits that can be obtained, but there is also an associated increase in costs.

In order to optimise the coordination of the technology implementation, the regulator should determine the minimum functionalities for the new meters. Besides aspects that could bring benefits to the distribution system operation and plan, the functionalities should necessarily include items that bring advantages to the consumer, like more detailed and more accurate information and better service quality. ANEEL has been studying some specific items, such as better determination of the indicators for continuity and the improvement of the current tariff structure. These perspectives will be considered by ANEEL when eventually defining the minimum functionalities to be requested.

CONCLUSIONS
Metering plays an essential role in electricity markets. The new functions provided by electronics are able to improve even more that importance and the regulator should encourage this development.

The characteristics of the Brazilian electrical sector provide some obstacles, although not unsolvable, which need special attention from ANEEL in its analysis. It is responsibility of the regulator to analyse and balance those particular characteristics, aiming at a unique regulation for all the country.

Although ANEEL is already analysing the matter, there is still a long journey with a lot of decisions to take, which will affect directly consumer tariffs and investor plans. It is also important that large scale pilot projects be implemented in Brazil, as they have been in other countries.

Finally another key point is the necessity for society to be aware of the benefits and related costs of the new technology so that it can evaluate more properly the regulatory agency’s proposals and provide its contributions.