As part of its drive to create a culture of conservation, Ontario has committed to installing “smart” electricity meters in 800,000 homes and small businesses by the end of 2007 and throughout the province by 2010. Smart meters can measure and record electricity consumption hour by hour (or even minute by minute) and can send that information to utilities through wireless or other automatic technologies. With smart meters, different prices can be set for different times, encouraging people to use less when prices are high. Smart meters are thus an integral and essential part of Ontario’s goal of creating a “culture of conservation.”

As well as the meters themselves, Ontario’s smart metering system includes an Advanced Metering Infrastructure (AMI) and the Meter Data Management and Repository (MDM/R). The AMI collects and date- and timestamps the hourly meter reads, and transmits them to a utility’s control computer and to the centralised MDM/R. The MDM/R will receive meter reads from across Ontario, process them to produce billing consumption data, store and manage the data, and provide interested parties with access to it.

But the essential element of the system in terms of encouraging conservation is time-of-use (TOU) energy rates and their impact on consumers. Several pilot projects mounted by Ontario electricity distributors have helped show how TOU pricing can motivate consumer behaviour. 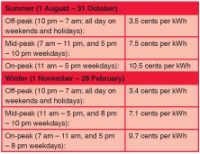 Hydro Ottawa began discussing the benefits of smart meters with its customers in 2005 and has now equipped more than half of them with a smart meter. Research conducted during an early pilot found that 88 percent of participants made changes to their electricity use as a result of being equipped with a smart meter. Seventy-seven percent time-shifted and used appliances during off-peak hours. And 92 percent said that they are more likely to take steps to use less electricity during on-peak hours.

Subsequently, Hydro Ottawa was selected by the Ontario Energy Board to support its Ontario Smart Price Pilot, which ran from August 2006 until 21 February 2007 with 375 electricity customers placed into one of three pricing groups.

The first group paid for electricity based on the existing Regulated Price Plan (RPP) TOU rates as established by the Ontario Energy Board (OEB) (Table 1).

The third group in the pilot test was on a critical peak rebate plan: instead of paying 30 cents more during critical peak hours, participants were provided a refund of 30 cents for every kWh reduction below what they would normally have used during those hours.

Participants were able to achieve an average demand reduction during the summer critical peak hours of 21.5 percent (25.4 percent and 17.5 percent for CPP and CPR respectively). In terms of conservation, the average overall reduction in electricity use across the three price groups was 6.0 percent (6.0 percent, 4.7 percent and 7.4 percent for TOU, CPP and CPR respectively). And 93 percent of participants ended the pilot with an accumulated savings, one third of which was attributable to load shifting and two thirds coming from conservation.

“The study clearly showed that prices motivated consumers to shift some of their electricity use away from peak hours, but the overall reduction in consumption was of greater significance in terms of consumer costs. It will be important to consider this ‘conservation effect’ as we move forward,” says Owen Mahaffy, Hydro Ottawa’s Smart Metering Initiative project owner.

The findings of the Ottawa study are borne out by the experience of other Ontario electricity distributors in the forefront of the smart metering initiative. Toronto Hydro has taken a leadership role with its commitment to install 400,000 smart meters by the end of this year – half of the province-wide total.

“We’re well on our way to meeting this target,” says Toronto Hydro CEO David O’Brien. “We don’t have final results in yet, but smart meters and time-of-use pricing make people more aware of their electricity use. If our customers have pricing information and the ability to act on that information, they will.”

By the end of 2007, Toronto Hydro will have approximately 400,000 smart meters installed at homes and small commercial businesses across the city. All 680,000 of the company’s customers will have a smart meter by the end of 2010. By November 2007, time-of-use data will be available to a test group of 50,000 Toronto Hydro customers, who will be participating in a study to determine how best to present this billing information to consumers.

“We’ll be engaging a sample group of customers through our website to test the on-line presentment of time-of-use consumption patterns,” says O’Brien. “It’s a customer education process that links each customer’s time-of-use consumption to the monthly bill. We’ll tell them what the bill is under tiered rates, the time-of-use equivalent, and we’ll provide a day-by-day, hour-by-hour breakdown of the consumption for them. We’ll illustrate how much they can save by shifting consumption into lower priced time periods. We hope that effective web presentment can be a key element of our customer service offering, once these rates are rolled out across the market.”

In Mississauga, the growing urban centre of 700,000 people immediately to the west of Toronto, Enersource Hydro Mississauga is also well into its deployment plan. By the end of the year, one third of the homes in this blossoming city will be outfitted with new smart meters. Before engaging in that deployment plan, however, Enersource launched Smart Avenues, a one-year smart meter pilot to evaluate smart metering technology in a controlled environment and to study how homeowners’ consumption behaviour changes once a smart meter has been installed. Roughly 700 customers took part in the pilot.

“Our goal with Smart Avenues was to deliver tools and information that these residents will eventually need to take advantage of smart meters and to test their response,” says Ken MacDonald, Senior Manager, Marketing, Communications & Government Relations at Enersource.

The Enersource initiative featured an online tool that allowed residents to observe their household energy use patterns. After receiving secure password protected access and step by step instruction, residents were able to examine data for each previous day’s usage on their home PC. Open house forums were also held in the community allowing residents to discuss the new information, become familiar with TOU rates and speak to conservation experts.

“This pilot did not expose residents to actual time-of-use pricing,” says MacDonald. “As a result, since the pricing signal was not a driver, we had to get creative in terms of engaging customers in the conservation and load shifting philosophy.”

One of the main deliverables from Enersource to these residents was a DVD production featuring real life conservation “champions” chosen from this central Mississauga neighbourhood. The production – titled of course “Smart Avenues” – is available as a series of downloadable episodes on the corporation’s website (enersource.com). The video, used in other Ontario jurisdictions now as an educational tool, examines a wide variety of practical options to conserve or divert energy consumption from peak periods demonstrating the application of simple after-market timers, devices like programmable thermostats and highlighting the advantages of other products and appliances containing timers.

Chatham-Kent Energy, a mid-sized electricity distribution company in southwestern Ontario with about 39,000 customers, has been studying advanced metering infrastructure systems since 2002 and has settled on a developed-in-Canada wireless mesh technology from Tantalus Systems. Chatham-Kent has installed over 25,000 meters so far and is currently billing 200 customers on TOU rates. While it is too early to assess customer behaviour – Chatham-Kent is working with the University of Windsor in an analysis of the pilot, results of which are expected late this year – the utility has identified a number of issues that CFO Jim Hogan characterises as “smart meter challenges.”

First, how will customers benefit from smart meters and TOU pricing, given that electricity spending remains a relatively small part of average household expenditure and that electricity demand is relatively inelastic? Second, what are the system-wide benefits of peak shifting, how are they being calculated (for example, the avoided cost of building peaking electricity generation plans) and should peak shifting consumers share in these benefits? Third, will certain groups of consumers – seniors, modest income families, small commercial establishments – be able to significantly shift or reduce consumption and so benefit from differential rates? The University of Windsor study will shed light on some of these issues, but others will need attention from agencies such as the Ontario Power Authority, which the government set up in 2005, and whose responsibilities include planning for demand management and conservation as part of its broader integrated power system planning for Ontario.

“While there are still questions about the overall benefits of smart meters, many of our customers are interested in their hourly consumption – which they can view on our web presentment tool – in order to conserve energy and to do their part in reducing greenhouse gases,” says Hogan.

The conclusions that can be drawn from the experiences of Ontario LDCs so far with smart metering is that, given the right technology and the right information, electricity consumers will modify their behaviour, both in terms of shifting from peak to off peak and using less power altogether. The impact appears to be greatest with critical peak pricing signals, but even just having the information on their consumption readily available affects peoples’ behaviour. That’s good news for conservation.