By Pablo Ramila and Hugh Rudnick

In the 1980s, Chile became a world pioneer when it introduced a series of reforms in the regulation of electricity. The objective of these reforms was to introduce market principles in the sector, so that society could benefit from greater efficiency.

The regulation – which was visionary for its time – maintained a reactive role, changing only when there were supply crises. This is why, in recent years, a series of regulatory modifications tending to reactivate the sector were introduced. However, this same sector was strongly affected due to a lack of investment and a high dependence on a fuel no longer available, Argentine natural gas.

These crises motivated a thorough search for energy resources that could ease the system in the short term and avoid the problems of tightness of supply. It is here that a resource used in other countries becomes more valuable, energy efficiency. Yet this efficiency is not obtained overnight. The current metering technology for end consumers does not allow promoting a more efficient level of consumption. The introduction of new metering technology, widely used and proven in other countries, would allow users to adapt their energy requirements on the basis of flexible pricing signals, which in turn would lead to important benefits for society. This article reviews some of the analysis being carried out with respect to the introduction of smart meters in Santiago de Chile.

THE CHILEAN ENERGY MARKET
The Chilean energy market is made up of the classic activities of generation, transmission and distribution of electricity – all provided by private companies. The state acts as both a regulator, dealing with the legislative concepts, norms and regulations of the different activities, and as a supervisory agent, supervising the various agents, guaranteeing both participating companies and consumers their rights and responsibilities.

In addition, Chilean regulation incorporates another tariff element which is subject to regulation by the authorities: the price of electricity for distribution companies’ regulated clients, i.e. the denominated node price. This price is calculated every six months by the Chilean National Energy Commission (CNE) and represents the expected value of the marginal costs of electricity over a period of 48 months. However, the character of this price, as it was calculated by the authorities, was modified in 2005 with the Ley Corta II. This Act introduced a mechanism of bidding for the adjudication for the electricity supply between generators and distribution companies for loads subject to price regulation. As a result, the node price will be defined by the outcome of the tenders, and is now named the “long term node price.”

The structure of the regulated tariffs for final clients that use less that 2 MW is made up, in general terms, by the following elements:

Ninety-nine percent of consumers in Santiago are residential clients and small businesses, who are charged tariff BT1. BT1 has a mono-term structure, where only energy is measured, and on the basis of which the consumed peak power is determined.

SMART METERING
The majority of electricity consumers in Chile either have or rent electromechanical meters so that their electricity bill can be calculated over a determined period of time. The reading of this type of meter is carried out manually, usually monthly.

The incorporation of smart meters has come about with the need to give price signals to users so as to allow them to modify their consumption, thus allowing to optimal the use of the resources, both at the generation level in terms of costs and emissions, as well as in the networks, minimising the investment required to supply peak demand by flattening the load curve.

There are different architectures and technologies available to communicate between meters and companies, the most adequate of which, in technical-economic terms, is the power line carrier. A review of the international literature, in particular of cost-benefit analyses of large scale smart meter deployments from different countries, results in a range of costs shown in Table 1. These costs depend on the scale of the installation and also on the technology used, among other factors. As can be seen, typical costs are around US$100 per point with communication capability.

INSTALLATION OF SMART METERS IN SANTIAGO
A non-trivial problem at the time of carrying out the deployment of a new metering system is related to the size of the area that is to be covered. The trend in developed countries is to perform full-scale smart metering deployments, covering all consumers of distribution companies. Even though the installation of millions of meters is monetarily very costly, it is socially profitable due to a massive consumer response to direct and indirect efficiency incentives. However, one should note that the energy requirements of customers in developing countries is dramatically lower compared with developed countries that have opted for a massive deployment of new metering technologies. This could anticipate a lower demand response, whereas developing countries’ consumers present a smaller slack in their energy consumption requirements.

Figure 1 shows that the energy requirements of Chilean consumers, mainly residential consumers, are radically lower in comparison with countries that have opted for massive deployment, suggesting a lower response from national consumers. It is clear that the countries that have studied or implemented new metering technologies have, at least, more than twice the per capita consumption of Chile. 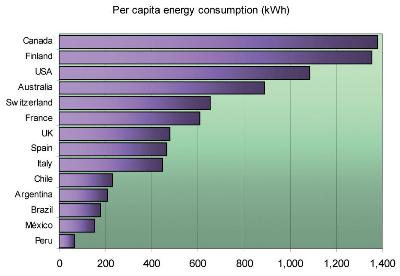 Customers’ georeferenced monthly energy consumption data during 2007 was provided by Chilean distribution utility Chilectra. Due to lack of more detailed information, certain assumptions were made in order to identify potentially more demand responsive customers and areas for optimal smart meter deployment. It was assumed that a certain area is more convenient if:

The use of spatial statistical analysis techniques allows a better understanding of the information contained on known coordinate points, especially the spatial relationship between these points’ features; for example, if groups of items or customers with similar attributes are concentrated. In this case, one wants to determine if clients with the described characteristics are bundled together, in what is commonly called a cluster. This would constitute an attractive zone for the deployment of smart meters.

To identify the existence of these clusters, autocorrelation functions were applied to the geo-referenced data. Positive autocorrelation indicates that similar data is found clustered. Figure 2 shows the results of low voltage urban clients using a 500 x 500 metre grid. The existence of a direct relation between the average monthly consumption (left) and the monthly variability (right) of these consumers in the year is shown.

With the previous analysis, a tentative zone of installation was defined based on the road network. For this, the borders of the polygon of installation were drawn through relevant avenues of the eastern sector of Santiago, as shown in Figure 3.

COST OF INSTALLATION AND BENEFITS
The main variables in the costs that have been identified in international experiences are the costs related to the investment and installation. 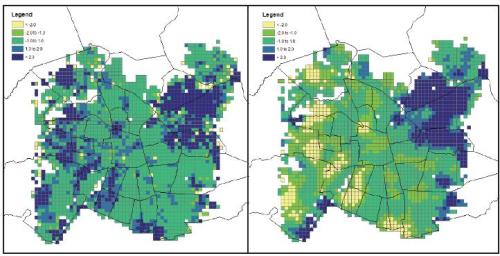 Investment costs
The main component corresponds to the cost of the meters themselves. Average values observed in studies and international experiences have been taken. Similarly, maintenance costs of the equipment, failure rates and, in general, all those costs that are not known in the country due to little experience in these matters, are considered. 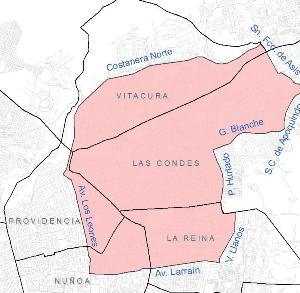 Figure 3: Borders of the polygon of installation

Table 2 shows the consolidated results of the investment and installation costs.

Direct benefits
Direct benefits include reduced metering and revenue collection costs, meter losses, maintenance costs, losses due to theft, disconnection/reconnection costs of clients and the costs to verify readings. A comparison of the costs and benefits is shown in Figure 4, with the costs greatly surpassing the benefits, principally because of the initial capital investment costs.

SOCIAL BENEFITS DUE TO ENERGY SAVING
An evaluation of the social benefits of smart meters was carried out from the perspective of the potential energy savings. Chilean regulation allows generator companies to negotiate temporary reductions/increases of energy consumption with groups of customers subject to price regulation – something that can be attractive to the generating companies at times of tightness of supply. In theory, under perfect competition in energy savings offerings, the optimal equilibrium incentive price is the difference between expected marginal cost in the period and the value paid by customers, determined by auctioned long term supply contracts. Under these conditions, social welfare is maximised, passing all benefits to final users. 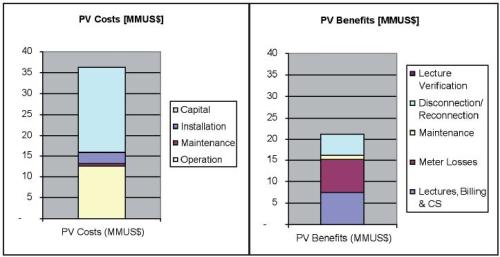 It is considered that the generating companies did offer the optimal price during the months of March, April, May and June of 2008. Considering offers carried out during 2008, generators aim to reduce a 4, 3, 2 and 1% of regulated customers’ monthly energy consumption during previously cited months, respectively. This is because hydrological uncertainty is present during these months, thus increasing marginal costs due to strategic water conservation.

It is supposed that the offering intention is to reduce peak power supply, thus energy to peak power translation is done by using regulated customers load factor, assumed to be 64%. For the sake of simplicity, a 100% load factor is assumed during peak hours. The results are shown in Table 3.

Table 3 – Present Value of the incentive costs (in US$ millions)

Aiming at the same target, the benefits in terms of incentive payment savings is evident. This is because smart metering allows paying for reductions in consumption at times when it is really necessary. Present metering makes it necessary to pay for reductions regardless of the time it happened i.e. valley hours, which is indeed a waste of resources.

The project’s net present value (NPV) is analysed for all system users and for customers subject to installation in a long term contract based market. Present values of costs and benefits are considered, to which incentive payment present value is summed. It considers energy saving incentive payment to users with smart meters. However, because it is impossible to achieve the energy reduction target only by them, traditional inefficient payment to non-smart metered users is considered. 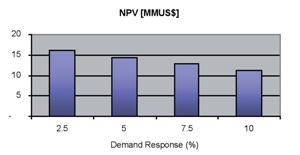 Figure 5 shows the project is profitable for all cases. Note that the greater the demand response, the lesser the benefit to users because there are fewer payments from generator companies. Remember that in a market with a fixed price, the users demand response constitutes free savings for generators.

Figure 6 shows results if only clients of the installation zone are analysed, considering the same costs and benefits previously identified, to which the present value of efficient incentive payments is summed. The project is not very attractive from the point of view of the users within the installation zone. Energy saving incentives payments are greater whereas tariff demand response is lower and vice versa. 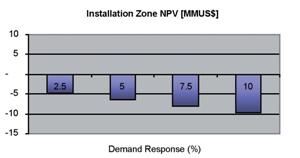 CONCLUSION
In this work, a specific area was selected in the city of Santiago within which it might be convenient to install smart metering. The cost of implementing this technology was estimated, taking into account the installation, the necessary capital and the costs of operation and maintenance. Also, a series of benefits at the distribution level and in the operation of the system in relation to demand response, as well as the efficient payment of incentives to generating companies for energy savings, have been identified.

It is found that the installation of smart meters in the determined zone generates benefits to society as a whole, but not to customers within the area of installation, who originate the benefits and pay for the meters.