By Ahmad Faruqui and Sanem Sergici

All around the globe, regulators and utilities are focused on smart meters. In the EU, smart meters are widely regarded as central to achieving the 20-20-20 goals. However, without providing customers with smart price signals, it is doubtful that the purported benefits of smart meters will accrue.

Much of the policy debate over smart meters thus far has focused on how to get the meters installed and who should pay for them. An equally important challenge for European policy makers and regulators is to ensure that utilities have an incentive to use smart meters fully to make smart prices part of an offer that will attract new customers.

If smart prices are offered in conjunction with smart meters, what will be the likely impacts on customer energy use and peak demand? To help inform this assessment, evidence has been surveyed from the 15 most recent experiments conducted in the United States, Canada, Australia, and France with dynamic pricing of electricity.

All experiments reviewed in the survey are based on panel data, involving repeated measurements on a cross section of customers. Some of the customers are placed on the dynamic pricing rate (or rates) and fall into the treatment group. Others stay on existing rates and fall into the control group. Technically, the control group should be randomly chosen, otherwise, the design becomes a quasi experiment. The better designs feature measurement during the pre-treatment period which allows self selection bias in the treatment group to be detected. It also allows for the application of the “difference in differences” estimator, which computes the difference in usage between the treatment and pre-treatment periods and subtracts from it the pre-existing difference between treatment and control group customers. Finally, the superior designs feature multiple price points, allowing for the estimation of demand models and price and substitution elasticities. Otherwise, all that can be done is a comparison of means using either the ANOVA or ANCOVA models. The results then are only valid for the rates tested in the experiment.

The review of the 15 pricing experiments reveals that the demand response impacts from different pilot programmes vary widely due to the difference in the rate designs tested, use of enabling technologies, ownership of central air conditioning and more generally, due to the variations in sample design. Figure 1 presents a summary. 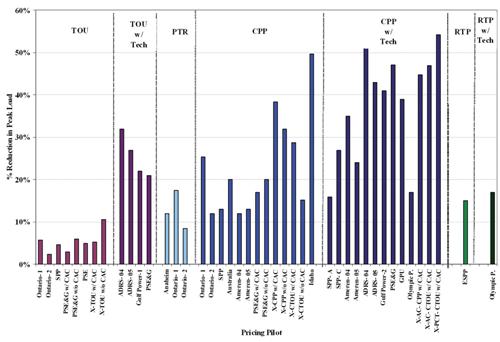 To synthesise the information from the 15 pricing experiments, a dataset of 28 observations has been constructed where the impacts are grouped with respect to the rate designs and the existence of an enabling technology. Table 1 provides the mean impact estimates and the 95% confidence intervals associated with the mean values from this dataset.

The survey finds that in addition to displaying a wide variation in the size of impact due to different rate designs, the impacts also vary widely among the experiments using the same rate design. The residual variation comes from variation in price elasticities and in sample design. Substitution elasticities (between peak and off-peak usage) from the experiments range from 0.07 to 0.40 while the own price elasticities range from -0.02 to -0.10. Availability of the enabling technologies, ownership of central air conditioning and the type of the days examined (weekend vs weekday) are some of the factors that lead to variations in the demand elasticities.

Another interesting question is how the impact estimates vary for different critical peak prices. To address this question, the demand response to increasing levels of critical prices has been simulated using the PRISM (Price Impact Simulation Model) software that was developed in the California statewide pricing pilot. The PRISM model predicts the changes in electricity usage that are induced by time varying rates by utilising a constant elasticity of substitution (CES) demand system. This demand system consists of two equations. The substitution equation predicts the ratio of peak to off-peak quantities as a function of the ratio of peak to off-peak prices and other factors. The daily energy usage equation predicts the daily electricity usage as a function of daily price and other factors. Once the demand system is estimated, the resulting equations are solved to determine the changes in electricity usage associated with a time varying rate. PRISM has the capability to predict these changes for peak and off-peak hours for both critical and non-critical peak days. Moreover, PRISM allows predictions to vary by other exogenous factors such as the saturation of central air conditioning and variations in climate. The model can be set to demonstrate these impacts on different customer types.

To clarify how PRISM models the relationship between the prices and the percentage impact on load in a non linear fashion, consider the following example. For the average customer, peak period energy usage decreases by 4% when the peak price increases from $0.13 per kWh to $0.23 per kWh. However, peak period energy usage decreases by only 8% when the peak price is increased from $0.13 per kWh to $0.43 per kWh. This example demonstrates that the load impact increases by one-fold (rather than two-fold) when the change in the price increases by two-fold. The response curves in Figure 2 demonstrate how the percent impact on peak period energy usage varies with the peak period price on critical days. These curves show that the percentage impact on the peak period energy usage increases as prices increase, but at a decreasing rate. This non linear relation between usage impacts and prices is reflected in the concave shape of the response curves. Differences between customer types in their price responsiveness can also be observed from these response curves. For a given price increase, customers without central air conditioning (non CAC) are the least responsive group while customers with central air conditioning (CAC) are the most responsive. 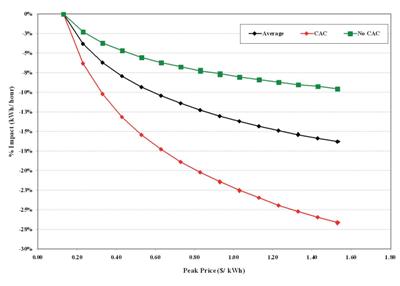 These results have important implications for the reliability and least cost operation of an electric power system facing ever increasing demand for power and surging capacity costs. Demand response programmes that blend together customer education initiatives, enabling technology investments, and carefully designed time varying rates can achieve demand impacts that can alleviate the pressure on the power system. Uncertainties involving the fuel prices and carbon prices emphasise the importance of the demand side resources. Dynamic pricing regimes also incorporate some uncertainties such as the responsiveness of customers, cost of implementation and revenue impacts. However, these uncertainties can be addressed to a large extent by implementing pilot programmes that can help guide the deployment of dynamic pricing rates.