Many information technology professionals in all industries, not just utilities, are coming to focus like never before on solving business problems. Many now say that ‘understanding’ should be the goal of technology, rather than constantly upgrading and improving computers. Computers should help understanding across a business or in any environment in which they are placed. Increasingly thoughtful observers are coming to the conclusion that while computer science has made exponential strides in enabling the transfer, manipulation and storage of data and increasing the speed at which work can be performed, it hasn’t done much for understanding. In fact, as installed over the last 20 years or so, computers may in fact have made it harder for business executives to understand the businesses they are trying to operate. There are several reasons for this conclusion, including:

• Computers installed in most businesses tend to manipulate data and facts very rapidly, but they are very poor at collating and expressing information in comprehensive thought pictures. One of the marvels of the human brain is its ability to take disparate facts and coalesce them into understanding. These insights tend to take the form of thought pictures or comprehension.
• The human mind tends to seek to create order from chaos. Computer presentation of information tends to be chaotic. No matter how many rows of data there are, if they don’t present a whole picture, and are accompanied by dozens of other tables of data, the result is chaos.
• Computers create tremendous amounts of work for those who rely upon them to do their jobs – and doing these jobs often involves many frustrating searches for information and for the correct patterns of information. They also tend to isolate individuals in front of their keyboards rather than enabling conversation and reading, two processes that have been shown to improve brain wave activity and learning.
• For most utility office workers, computers are the modern equivalent of repetitive factory work: put Part A onto Part B, tighten the screw and let the belt carry the product to the next station. With computers, it is enter the data, save it and go on to the next piece. 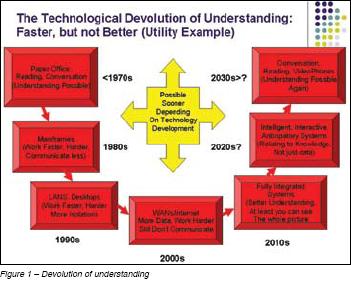 Some observers see a ‘devolution of understanding’ that tracks quite readily with the development of computer systems, as shown in Figure 1. In this theory, prior to the beginning of the computer revolution in business in the 1970s, individuals used conversation and reading to enhance understanding. As mainframes and later desktops and wide area networks came along, conversation declined and reading became an exercise in data manipulation rather than perusal of cohesive thoughts designed to improve understanding. 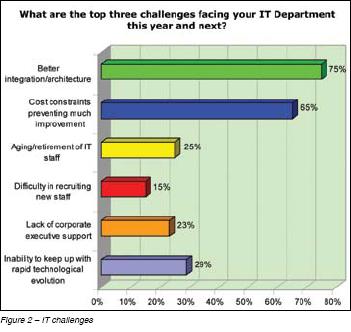 In the mid- 2000s, utilities especially, but many other industries as well, find themselves at the bottom of the curve. The interesting thing about this theory is that we are already started back up the chain toward understanding, as business seeks to integrate the widely disparate ‘silos’ of data they have accumulated into more comprehensive integrated systems. With integrated systems it becomes a bit easier to see the whole picture.

However, in order to really reach understanding two additional steps will be necessary – according to the theory. Computer systems must become ‘intelligent’. That is, they must be capable of integrating data and presenting it as ‘ideas’, rather than as numbers. And interfaces with human beings must go back to presenting information in the ways that best match the way the human mind works – reading and conversation. In other words, we need Dr. Spock’s talking computer from Star Trek and we need data collated into comprehensive ideas that we can read or listen to, rather than the textual equivalent of bits and bytes. That utility executives have recognised the problem is obvious from numerous studies conducted by The Sierra Energy Group of Energy Central over recent months and years. 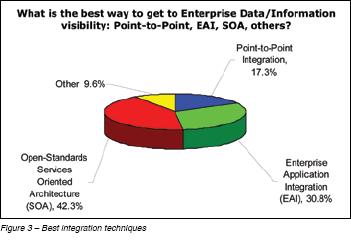 In virtually every study, as shown in Figure 2, executives say their most pressing technological need is for better architecture (design) and integration of their systems. With 75 percent of respondents – utility CIOs in this case – recognising the problem, the industry would seem to be on its way to solving it. However, there are many challenges to just moving to ‘integrated enterprise systems’, much less intelligent, communicative systems. The second most selected issue shown in Figure 2, ‘Cost constraints preventing much improvement’, is obviously an important one of these. 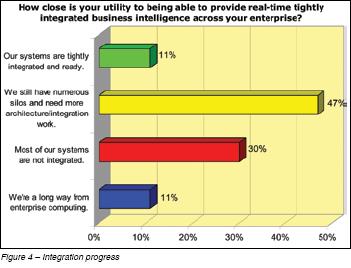 Another major problem utilities face is a lack of industry consensus (including utilities and vendors) on the best approach to integration, and a reluctance on the part of many vendors to embrace ‘open’ communications standards. Proprietary languages and interface technologies still dominate much of what comes out of the computer industry today. Even CIOs themselves are uncertain of the best approach, as is shown in Figure 3, taken from a January 2006 survey. Many utilities have some or all of these architecture/integration techniques in place and there are many vested interests across the industry behind all of them.

However, if an enterprise truly wants to be ‘open’, not only internally but in communications with other entities with which utilities increasingly must communicate, open standards would seem to be the way to go. Otherwise you’re constantly working through translators – not the most efficient way to operate, as is demonstrated daily in international business relations. While many utility executives have come to understand that their systems do little to create understanding, much less an enterprise view of the businesses, they have just begun what is likely to be a long process to get to where they want to be. Most utility systems are not very well integrated.

“We are not where I would like us to be,” said another CIO. “We are ahead of the competition related to AMR type data. The next step is to provide AMR data for load and demand management decision-making. However, more work is required in terms of providing the right data for other systems such as CIS, CMMS and ERP.”

LOTS STILL TO BE DONE

As that CIO points out, there still is a lot of work to be done in integrating traditional utility database-type systems such as customer information systems, financial systems, and materials and maintenance systems. Work has also just begun on integrating real-time operational systems such as SCADA and DA. In fact, as shown in Figure 4, only about 11% of CIOs claim their systems are well-integrated, and that is at the current level of computer-to-human interfacing – which, as mentioned above, does not do a lot for understanding. Given the current state of computer systems in the industry, what can utility executives and the vendors who serve them do to move their enterprises back up the chain toward understanding? Here are some suggestions:

• Build systems that communicate – move toward open standards/integrated systems.
• Consider how the user communicates/thinks.
• Look for breakthroughs in human-to-human, human-tocomputer-to-human communications.
• Remember, you’re not just building data-processing systems, you’re trying to help others toward understanding.
• Look for opportunities to ‘steal a march’ – that is, seek a ‘breakthrough’ technology that moves a step or two beyond where we are now.
• Communicate effectively with all stakeholders to gain their buy-in and their understanding. Business is like any other human endeavour – it requires understanding by and among the participants to be effective.

The computer systems currently in use don’t seem to contribute very much to understanding. They accomplish work at a much faster rate and in much more massive volumes – but in order to enhance understanding, they still need to be evolved toward intelligent, anticipatory, communicative devices that deal with humans in ways that more closely match the way human beings think.