Smart meter enabled demand response and consumption feedback has great potential to achieve cost and energy savings – but only when consumers are carefully guided through the correct set-up and management procedures.

In October 2011, a major research report published by the Brussels-based European Smart Metering Industry Group (ESMIG) confirmed that significant results could be achieved throughout Europe if best use is made of demand response and power consumption feedback information.

The report, entitled “Empower Demand”, which was based on research conducted by the VaasaETT Global Energy Think-Tank, Finland, also highlighted the overwhelming importance of understanding consumer needs, how best to communicate with them, and how to ensure their optimal adoption of smart enabling technologies. These issues were found to be key in deciding which of the different demand response and feedback approaches would be better to apply.

Follow-up research currently being conducted by VaasaETT for ESMIG is now shining more light on the characteristics of communications and feedback in the best smart metering introduction models from around the world.

The new report’s preliminary findings suggest that there are six key stages through which consumers must progress in order to optimize their responsiveness to and involvement with smart meters. A key early conclusion is that promoting new smart solutions should start primarily with public communications delivered by independent, official sources such as government authorities, NGOs, consumer associations or other trusted sources, but with minimal (or no) involvement from the commercially-involved utilities. Indeed if utilities act as the primary communicator in the early stages, their messages are likely to be taken less seriously by suspicious consumers.

Over time, the latest report goes on to say, public education and awareness should be supplemented by real customer experiences and experimentation information, with references to smart technology being introduced only at a relatively developed stage. Technology and smart meters should not be presented as the solution in themselves, but rather as tools to achieve or facilitate an already established beneficial new situation.

When smart technology is presented more directly to consumers, it should initially only be offered to selected customers for a limited period, supported by a clear explanation confirming insurance against escalating net costs or other negative consequences during the pilot phase. Only after the principles of technology and the services afforded by it have been experienced and accepted by sufficient numbers of customers, should paid services or, for instance, dynamic pricing, be offered to the mass market of customers.

No less significant than the other dynamics though, is the importance of word of mouth communications and making any feedback and experimentation processes fun for customers, as a means of encouraging them to pass through the stages of experience.

Above all, what is obvious is that customers cannot and should not be forced into adopting new behavior, technologies and solutions. Instead they must be taken on a journey of their choosing and at their own pace if the desirable twin outcomes of lower consumer costs and more efficient management of power generation are to be achieved.

The diagram below shows the six stages (A-F) of a customer’s journey from introduction to the idea of smart metering technology through to acceptance and active participation. 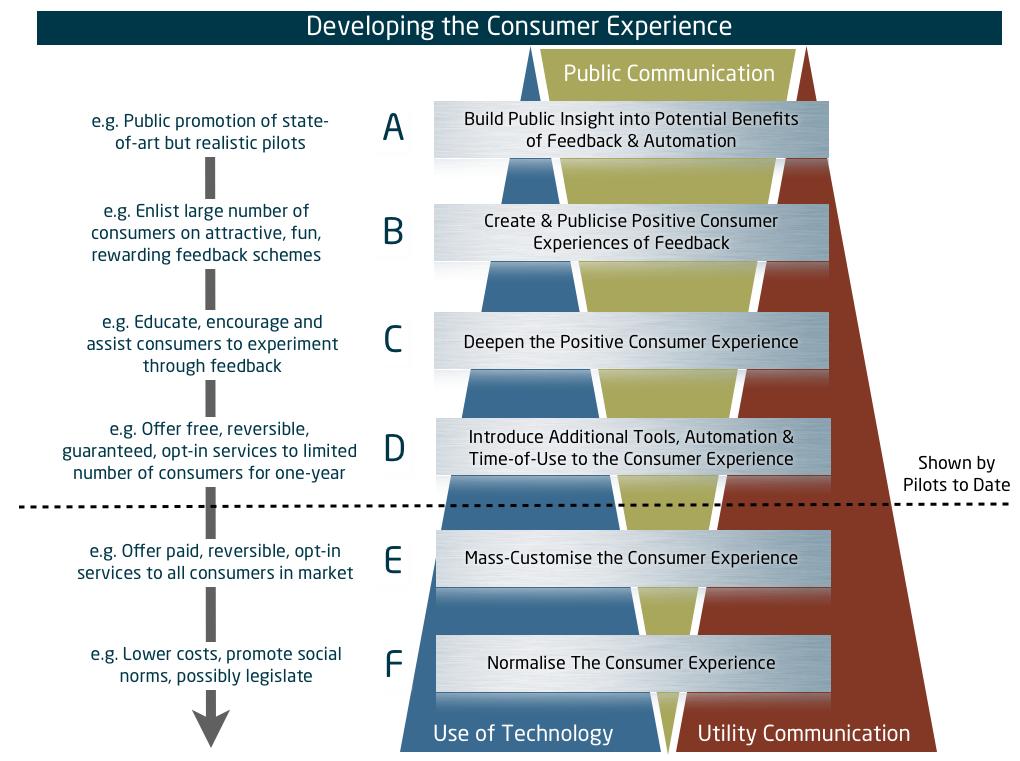