Introduction
The performance of today’s high-technology products continues to improve, which has been driven in large part by the semiconductor industry. Changing the way businesses work and consumers live, information technology innovation has a powerful impact on the global economy.

Ferroelectric random access memory (F-RAM) is among the most advanced semiconductor memories. This white paper delves into the technical advantages of designing with this nonvolatile memory technology, specifically how it can reduce system complexity, lower power consumption, and minimize system maintenance to improve countless variety of applications.

A Primer on Semiconductor Memory
Established semiconductor memories can be divided into two categories: volatile and nonvolatile. Examples of volatile memory include SRAM (static random access memory) and DRAM (dynamic random access memory). RAM type devices are easy to use and offer high performance, but they share a common vulnerability: stored data is lost when the power supply is removed.

Nonvolatile F-RAM, on the other hand, has similar performance to RAM devices but retains its data when power is shut off or interrupted. Each memory cell contains a thin ferroelectric film of lead zirconate titanate [Pb(Zr,Ti)O3], referred to as PZT. The crystal has two stable states. When an electric field is applied, the zirconium (Zr) or titanium (Ti) atom changes position. The read circuit detects the polarity of the atom as a difference in voltage, which determines the 0 or 1. Each orientation remains in place even after the electric field is removed, preserving the data within the memory without the need for periodic refresh. 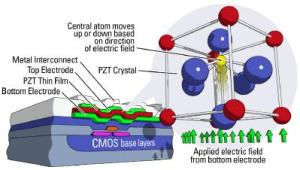 F-RAM uses a thin ferroelectric film of lead and oxygen atoms plus zirconium or titanium (PZT). Although called ferroelectric due to PZT’s hysteresis characteristic (i.e. charge plotted as a function of voltage), which is similar to the magnetic hysteresis (B-H curve) of ferromagnetic materials, the memory cell neither contains ferrous iron, nor is it influenced by magnetic fields.

Like F-RAM, ROM (read only memory) is a nonvolatile memory that does not lose its data when power is removed. Newer generation ROM, like EEPROM (electrically erasable programmable read only memory) and flash memory, can be erased and re-programmed multiple times. These traditional writable nonvolatile memories derived from floating gate technology use charge pumps to develop high voltage (10V or more) in order to force carriers through the gate oxide. As a result, these floating gate-based devices have long write delays and high power consumption, and a write operation that is destructive to the memory cell. They will eventually wear out, sometimes in as little as 10,000 write cycles. 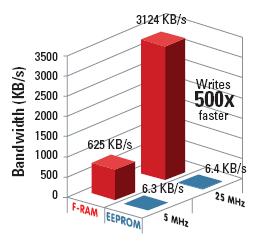 At 25 MHz, F-RAM writes nearly 500 times (488x) faster than a comparable EEPROM device, as shown in the opposite graph. As clock speed increases 5 fold, from 5 to 25 MHz, a proportional improvement in write speed is achieved with F-RAM. An increased clock speed has a negligible effect for EEPROM due to its inherent page buffer limitations.

In high noise industrial and automotive environments that are prone to power failure or are frequently power cycled, F-RAM excels with its fast write, high endurance, and low power consumption advantages.

How F-RAM Contributes to Efficient Design
The benefits of F-RAM can be seen from project conception to completion—from making obvious impacts on the design and manufacturing process, to ensuring efficient operation of the end product, including easy after sale maintenance. The following section outlines the ways that F-RAM reduces system complexity, power consumption, and maintenance.

Reducing System Complexity
F-RAM performs read and write operations at bus high speed. There are no delays before the written data becomes nonvolatile. Floating gate memories, on the other hand, have long write delays of five milliseconds or more.

A key advantage afforded by F-RAM’s fast write speed is the elimination of software development necessary to manage EEPROM write delays. This leads to a quicker design that enables faster time to market. With F-RAM, there is no waiting for writes to finish and therefore no cumbersome data polling.

Furthermore, F-RAM offers virtually unlimited write endurance, so it doesn’t wear out like other nonvolatile memory devices. Both EEPROM and flash memory have individually erasable segments, which have a limited number of erase cycles before failing. When using floating gate memory solutions in write intensive applications, a common but burdensome technique called wear-leveling is required to extend the life expectancy of the memory in the system. Due to F-RAM’s inherent high write endurance, the complex process of wear-leveling is not required.

To combat the limited write cycle of EEPROM, some system designers have resorted to using SRAM with a battery. F-RAM, while performing much like a RAM, requires no batteries due to its native nonvolatility. This not only saves space in the system’s design, but also removes the need for battery replacement, contributing to a “greener” society with less pollution from battery by-products. In addition, F-RAM saves costs by reducing the need to handle batteries separately to protect them against the heat profile of common soldering processes.

Lastly, a common use of F-RAM is to save the current state of data when power fails. With F-RAM, a system writes faster and uses less power to do it, so no space-consuming and relatively expensive capacitors are needed to make up for the EEPROM’s slow write speed.

Reducing Power Consumption
As industries worldwide aim to market goods with messages of environmental awareness and conservation, design engineers are challenged to lower the power consumption of their products. In some systems, power consumption may be so low that only one backup battery is required for the system’s entire lifetime. This ultra low power trend is also extending to a new breed of devices that do not require a battery at all and are capable of energy harvesting, or deriving energy from the environment to power the product.

The key to both low-power and no-power capabilities is a system’s ability to sleep at ultra low power. In fact, “sleep mode” power consumption in some devices is so low that it is effectively shut down. Shutting down a device works as long as the system can remember its previous state when power is restored. For this function, a nonvolatile memory with fast write speed, low operating currents, and high endurance is ideal. A memory with these features enables the production of systems that never need to be plugged in and therefore never demand battery replacement.

A common memory architecture used to store system configurations and usage history is serial nonvolatile memory, such as F-RAM, EEPROM, and flash memory. Energy, which is used by each device as it writes and erases, is the best way to compare the technologies, since it takes into account the duration of the task as well as the amount of power required to perform it.

Serial data flash uses significant amounts of energy when erasing pages/sectors due to the considerable amount of time needed for these operations. F-RAM has a clear advantage over other nonvolatile memory technologies. It consumes 60 times less energy than the next best EEPROM alternative and 400 times less than the best performing serial data flash in erasing and writing 64Kbits of data. 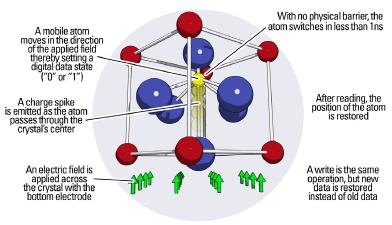 Why is the performance of F-RAM so efficient? The up and down polarization of F-RAM molecules happens quickly and requires very little energy.

With EEPROM and flash memory, it is the extra energy required to force electrons to jump through the insulating barrier when writing that makes the power consumption higher than that of F-RAM.

Reducing System Maintenance
When a battery fails in the field, a service engineer must be dispatched to replace the part, causing lost productivity while the equipment is down for service. Not only does F-RAM eliminate the need for in-field battery replacement, but it also enables factory floors to gracefully recover and resume normal operation after a power failure. It is F-RAM’s ability to capture more data faster and at a higher frequency that allows the state of systems to be saved instantly on power failure, leading to the savings of thousands of dollars in maintenance and down-time expense.

Application Examples
F-RAM is embedded in a host of demanding applications for the metering, computing, and automotive industries, as well as in industrial, scientific, and medical applications. 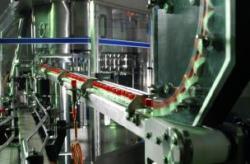 As a true nonvolatile memory, an F-RAM memory chip offers superior write speed and high endurance. It is resistant to shock and vibration — common in many industrial settings — and impervious to memory loss during unplanned power down events. It does not require a battery and uses minimal current (as low as 15mA active current, 15μA standby current), which eliminates reliability concerns, functional disadvantages, and system design complexities of battery-backed devices like SRAM. F-RAM is an ideal memory solution in rugged, high-throughput industrial applications.

Automotive Application: Electronic Power Steering
The use of F-RAM in automotive applications began with smart airbag applications, and since then, has expanded to include stability control, park assist, adaptive transmission, cockpit instrumentation, and various infotainment applications, including radio, navigation systems, USB connectors, and DVD players. 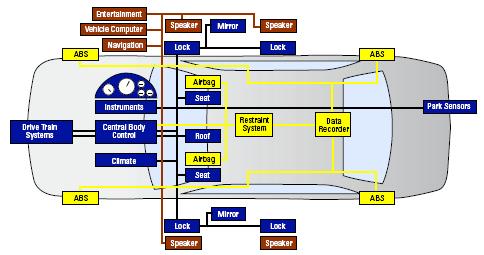 Power steering is one automotive application that has been available in commercial and passenger vehicles for decades. It is designed to reduce the steering effort by using an external power source to assist in turning a vehicle’s wheels.

In the event of an error, the EPS must not produce accidental steering that may cause the vehicle to turn in an undesired direction. The electronics of the EPS system monitors itself and disconnects if an error is detected. F-RAM is used to store error codes, self-diagnostic results, and data when emergency operating modes have been activated. The fast write of F-RAM allows the self-diagnosis and self-check to be written in the same computational cycle, which allows intermittent errors to be captured. The write time of EEPROM and Flash memory is too long, and errors may not be recorded as fast as they are detected. 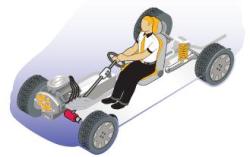 The high longevity, low power consumption, and remarkably fast writes make nonvolatile F-RAM an ideal solution for storing error codes and diagnostic data required by today’s sophisticated Electronic Power Steering systems. It is estimated that by 2010, 50% of new vehicles will have EPS.

For nearly eight million Americans, hearing aids make a significant impact on everyday life. As the aging population continues to grow, that figure will only rise. The total worldwide market of approximately 20 million units is anticipated to increase to 50 million units by 2015.

Nonvolatile memory reads software algorithms designed to perform precise DSP actions. F-RAM is an efficient performer in digital hearing aids, consuming approximately 1/60th of the power of EEPROM when writing 64 kilobits (Kb) of data. This leads to longer battery life, making the hearing aid more convenient for the user and leaving more power for additional features within the device.

When determining whether an F-RAM product is an appropriate solution for a given application, system designers should consider the following:

For More Information
You can find out more about how F-RAM semiconductor products can improve your next system design via the following resources: