The power line is a pre-existing communication channel with the widest coverage. Power line carrier technology can realise data signal transmission in an intelligent network with the least extra wiring cost. So, most of engineers are paying attention to the development of PLC technology which has gradually become the main research hot spot in recent years. But the high impedance variation, high noise and the strong attenuation characteristic of the power grid in different regions, as well as in different periods of time, makes the actual data communication result a completely diversified one. The unsatisfied power grid environment becomes the biggest challenge to the power line carrier technology.

As you know, it has become the national policy for most countries to protect the environment by trying to reduce the carbon dioxide emissions. And the improvement to the management of power departments by the timely collection of data from every electricity user to an effective data analysis platform will become one of the realistic methods of reducing the energy consumption. PLC technology can surely be assumed to be the front-runner of all the other available AMR/AMM solutions.

In China, due to the historical reasons, the actual power line laying situation is quite diversified. The interference of harmonics and noise to the power network is not strictly regulated. The power network pollution in some areas is very high, which greatly increases the challenge of deploying PLC technology. In recent years, PLC technology solutions from different vendors have all failed in the field, returning unacceptable data collection results.

A reliable carrier system electric meter data needs to be able to communicate across long distances and have strong networking abilities. Normally, the length of a power line under one transformer is between 1 km to 2 km, while the existing communication distance of low-voltage carrier power line from point to point is 100m to 500m. The relay function is critical for all the meters to be able to send data to the concentrator. Each solution adopts various technical methods to improve the communication distance, including spread spectrum, the zero transmission, filter, increasing power, and improving the acceptance sensitivity etc. But these methods do have the limitations. Due to the bad power grid environment, point-to-point communication distance sometimes declines to several meters from 300 meters. The resistance changes in the grid, the noise impact — especially the various electric start-ups and shutoffs — capacitance and inductance distribution function of the power,; multifarious interference waves of the reflection; standing waves; resonance; the line to spread across multi-levels; the intervals; each link: all these will affect etc, point-to-point communication. Therefore, the carrier electric meters under a transformer must have the networking relay ability.

NETWORK TOPOLOGY
In the area of unpredictable network topology, the specific circumstances and the mathematical models of successfully networking are very intricate, and the composed network should be able to adapt to various external conditions such as the change of the power grid environment and deployment and replacement of meters.

At present, the greater part of the networking solution is the static network. A static network is a search and static network, similar to the objectively geometric topological structure in the low-power network. During the setting process, it uses the approximate algorithm which goes through multiple signal transmissions and surveillance, after the first several hours to tens of hours of commissioning process (or “learning process”) to establish the reading network relay point and the reading path.

Due to the uncertainty of local meter reading time, we have to seek a new way of meter reading. After several designs, tests, validations, improvements and using carrier chip based on the Lonworks agreement, the technology of the dynamic network carrier meter reading was launched in the domestic market. The so-called dynamic network is not the network topology under one transformer: it uses dynamic network technology, until every concentrator issues a command that it starts without any networking historical memory. Throughout all the equipment across the entire network involved in gathering and transmitting process information, the technology is geared to establish more transmission links rapidly and efficiently in order to seek out the correct relay route to target. It requires all the equipment in the system to be interactive and synchronised in order for the automatic relay to find target meter instantly on the basis of random relay and context of the geological hazards.

FEATURES
The technology has the following features:

In the development process, from the pilot runs to mass production with 8000 meters, the whole system performed well under the rigorous – 30OC climate conditions.

THE REASON FOR GREAT RESULTS
The static network enables the concentrators to calculate out one or several optimal paths according to the historical data. The dynamic network means to choose several paths, according to the real-time grid environment. The concentrator issues the order to read the meter and multi-meters receive and forward the command for “free competition”. This real-time option is completely according to the grid’s instantaneous changes to choose the relay and the relay series. The relay series and paths are different from the data to the concentrator and return to the target. And the path is different for the continuous reading meter (on the other hand, which proves the fluidity of the grid). 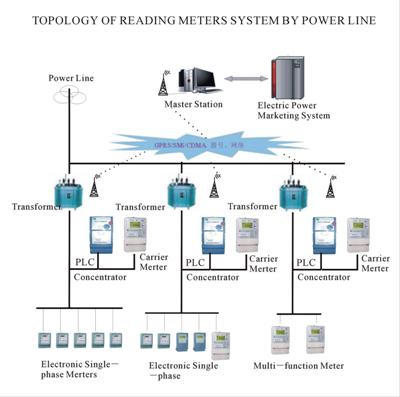 Parallel circuits failure mode is used to replace the series circuits failure mode
A static network issues the orders to read the meters according to the fixed design of the path in advance, the target receives the orders and return in the round. In the process, any abnormality can cause a reading failure. This is the series circuits failure mode. The dynamic network designed by us receives and forwards orders by multiple meters, frequently over 10 sets in participation. As long as one meter can transmit the data to the next one, the communication will be successful. The probability of success for parallel circuit’s failure mode is very much better than that of static network mode.

Avoiding the short board effect
A static network in a charge process (the effect of multiple relays is more apparent) must ensure that each relay that is engaged is able to accomplish the task to enable successful reading. The dynamic network consists of multiple meters receiving and forwarding data and is frequently the least interfered with, transmitted power, and provides the highest sensitivity for the receiving meter to operate in. In other words, in the static network, only when the worst meter is operating well, it can be successful, while in the dynamic network, all meters need to be performing well in order to be successful. This way of working with the means of a network improves the system noise reduction and anti-jamming ability significantly to avoid the short board effect.

Higher baud rate can reduce the data interference probability
Currently the baud rate of the static network in the Chinese market is from 100 to 600 while using spread spectrum technology. We adopt the 5400 baud rate, so for the same data transferred, the total time is only 1/9 of the original one, and the probability of destruction by grid disturbance is only 1/9.