Looking back ten years and trying to remember what kind of technology was used for testing electricity meters then is not easy. Fortunately, it is possible to follow the process by re-reading articles in Smart Energy International. Here is a brief review of the trends and technologies. Obviously development did not take place uniformly in all parts of the world, but Europe has always been quite progressive as regards meter testing, so we will focus mainly on this region.

In the 1990s, a number of manufacturers existed in many countries producing traditional meter test benches at customers’ request. Their clients were primarily manufacturers of electromechanical meters and the test laboratories of electricity utilities. These utilities often purchased un-calibrated meters, and adjusted and calibrated new and refurbished meters in their own laboratories. By the middle of the nineties, many manufacturers of meter test equipment had begun to produce electronic systems exclusively, but this did not apply to all.

So in India and China, for instance, conventional meter test benches were still being produced, equipped with a transformer-type load generation and using modified electromechanical meters as reference meters. Generally, the measurement methods involved comparing meter revolutions as well as time-power methods. The tester would manually control the test load by means of variable transformers and  electromechanical wattmeters per phase. The errors of the meters under test were determined by using stopwatches and counting the revolutions of the meter rotors. The measurement accuracy achievable in this process was quite poor compared to present requirements, but was usually sufficient for calibrating common meters of class 2. Nevertheless, modern electronic test benches were already being applied in many regions. They excelled through electronic power sources, static reference meters with accuracy of 0.1 or better, and were operated using a PC. 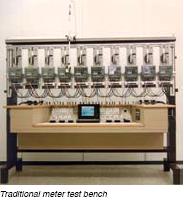 These stations guaranteed high measurement accuracy under precise test conditions with high efficiency. Errors were determined by means of scanning heads that could accurately detect the rotor mark of Ferraris meters as well as the LEDs of static meters, whose use was increasing. The subjective influence of the operator could thus be reduced. Static meters had already been
equipped with large registers for recording energy and power values, and the test benches were able to test these registers as well. 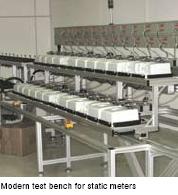 The optical interface was mainly used for communication between meter and test bench. The electronic meter test benches were therefore equipped with communication heads for receiving and evaluating the data of the registers sequentially or simultaneously from a large quantity of meters. This way, up to 40 or even 80 electronic tariff meters could be tested and calibrated with little effort.

There have not been any quantum leaps in the field of stationary test equipment for electricity meters; but today the accuracy of a reference meter is at least 0.05% or even 0.02%. Needless to say, a meter test bench of 2006 is capable of testing the functions of a modern meter more efficiently. The software controlling the test bench and the test sequence has become more intelligent. In 1996 the MS DOS operating system was used almost exclusively; today the dominant operating system is a current version of Microsoft Windows. In the beginning, all vendors of meter test benches had difficulty converting from DOS to Windows.

Even today, many stations are running consistently on DOS, but the limits have been reached. Once the old PC stops functioning and a new, modern PC has to be employed, the only option is to replace the old software with the current version running on Windows. Then again, there is the possibility of some old hardware or special custom functionality not being supported by the Windows software. In this case the user has to decide whether he wants to do without the unsupported functionality, or whether to go ahead and replace the old test bench – which might for other reasons not fulfil current requirements anyway – by a modern one. This new test bench would in general offer significantly more functions than the old one. As an alternative, many users modernise the old test bench by extending it with new hardware. The years after the millennium have shown rapid development in electricity meters, and Ferraris meters are no longer being used to the same extent.

As a result, some meter manufacturers today utilise meter test stations in which meters are no longer suspended vertically, as they had to be when calibrating electromechanical meters – now they are adjusted and calibrated lying flat on the test rack. This allows more variety in the design of test benches. More and more electronic meters are adjusted and tested in automatic mode, without the need of any mechanical manipulation. So, for instance, a batch of meters is mounted on a mobile desk, and the automatic adjustment and verification program with a number of load points is started. After a while the entire batch of meters is fully calibrated, as well as being configured according to a customer’s request, and after sealing is packaged and shipped. The main change over the last ten years has been the shift from the former verification of a single meter in the meter lab to numerous measurements on site.

Until the beginning of the nineties, test units for measurements on site were quite heavy and had limited functionality. Usually they could only determine the total power and energy, they had narrow measurement ranges, and their connection to the meter – as well as their operation – was complicated. Sometimes the measurement results only came out in the form of impulses that had to be converted into relative errors afterwards. Heavy, unwieldy, transformer-type phantom loads were used for the testing of meters under predefined load conditions. Their load was often influenced by the mains voltage and therefore did not provide adequate stability. Even simpler techniques were used in some companies; the operator took along a reference meter and a fan heater or a similar load with for example 2.2 kW consumption. At on-site testing with a mains voltage of 230 V, this corresponds to a load of approximately 10 A, i.e. approximately the rated current of the meter. 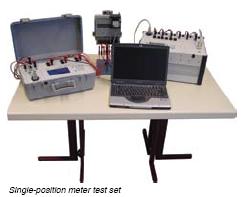 The first electronic phantom loads had been developed in the 1980s for periodic on-site testing of important meters in special cases (e.g. in substations, at large customers). The aim was to determine if the meter error was within error limits in the entire load range. Since the nineties, the responsible engineers and managers at utilities came to realise the advantages that the sporadic or regular testing of meters and installations bring about. Smart Energy International regularly published articles addressing different aspects of on-site testing, which pointed out that the use of portable measuring equipment can reduce net losses because incorrect installations can be identified. The features of modern reference meters and other portable instruments were designed in a way to give the service technician significantly more options at a customer’s site. The weight and usability of portable equipment has improved so much that today in many countries their use has become a normal task of service personnel, and all specialists carry such equipment when going to the customer’s site.

Previously, measurements on site were relatively uncommon. If a customer had a claim, the service technician would simply exchange the meter in question, which would afterwards be examined in the lab. In most cases, such claims do not result in any drawback for the utility; the outlay, however, is often not compensated in full. On the other hand, experience has shown that circuit errors (changed CT connection, disconnected supply voltage and many more) are often discovered during a visit by a service technician. This shows that the use of portable measurement and test equipment which is user-friendly but has increased functionality results in additional benefit to the energy supplier. And this in turn has led to a shift in focus for the manufacturers of test equipment. Significantly more portable equipment is being sold today than was the case in 1996. 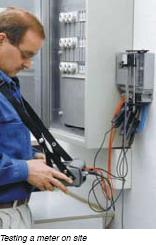 Another tendency that has been observed in the last decade is that the metering labs of the utilities in many countries have been merged or closed down, because the utilities are buying meters that have already been calibrated. On the other hand, fewer meters needed to be repaired and recalibrated. This is linked to the substantial drop in the price of an electricity meter; after the calibration term, it is cheaper to buy a new one than to repair the old. Indeed, electronic meters often cannot be repaired at all, because either components are no longer available or the labs do not have the facilities or operators with the right skill set to carry out the repair.

Closing down the labs has led to a situation where personnel have lost the opportunity to become familiar with the features and potential of modern multi-function meters. However, the vendors have developed compact and universal single-position test systems, which have solved the problem. Using such systems, the service technicians now have the opportunity to get acquainted with the new meters and their functionality. Such a test system, for example, allows generation of a load in any quadrant to determine if the meter records the measured values in the required registers. The growing importance of measurements at the installation site of the measuring instruments has resulted in portable test equipment being fitted with additional functions.

Now it is possible not only to check the correct registering of the meter, but also to measure the burden of the instrument transformers or even their transformer ratio. This way, new possibilities arise for improving billing accuracy, and thus reducing losses. Meter test equipment manufacturers today offer training to utility personnel to get acquainted with the possibilities of on-site measurements, and demonstrate methods for detecting circuit errors. The general development of meter test equipment will continue. The manufacturers of test equipment have been able to offer vendors a solution immediately after the meter manufacturers have launched a new meter generation, or if regulation has changed, and this will continue in the future.