As a result, the government put in place a number of strategies to encourage new generation and build a culture of conservation – not easy in a province that grew up on inexpensive, regulated electricity rates and plentiful hydroelectric power. It was out of this background that the Ontario Smart Metering Initiative (SMI) was born. Under this initiative, smart meters will be installed in every home by 2010, rate structures will be introduced to drive conservation and demand management, and energy service providers will be expected to facilitate load shifting on behalf of consumers.

The Ontario Ministry of Energy developed a vision to support the SMI policy direction. That vision involved nearly 90 local distribution companies (LDCs) starting on a smart meter implementation course while, in parallel, a single, centralised Meter Data Management and Repository (MDM/ R) system was developed and implemented. The MDM/R’s job is to receive hourly consumption data on 4.5 million meters from the LDCs’ Advanced Metering Infrastructure (AMI) systems on a daily basis, to provide validation and estimation processing, and to return billing quantity data to the LDCs as required. In addition, support will be provided for end customer enquiry via web services and interactive voice response (IVR).

Key reasons for the choice of a central MDM/R were that it avoids duplication of costs among the LDCs, removes barriers to LDC mergers and to retailers and other energy service providers, and provides a single repository of consumption data. All data and audit trails have to be retained for the life of the meters.

Recognising that there was a need to provide an enduring service, regulations were put in place that identified a new role in the Ontario electricity sector – that of the Smart Metering Entity (SME), whose purpose is to operate the MDM/R going forward.

The government asked Ontario’s Independent Electricity System Operator (IESO) to take on the job of selecting and implementing the MDM/R and subsequently announced that it was to take on the role of SME as well. The SME role may also include other aspects of the Smart Metering Initiative that the government may wish to add at a later date.

To hear Bill Limbrick, vice-president of information technology and infrastructure at the IESO, describe Ontario’s Smart Metering System Implementation Programme (SMSIP), it is the sort of project whose complexity has challenged his team every step of the way.

THE ONTARIO SMART METERING CONTEXT
The success of the SMSIP project to date stems, in part, from a very clear delineation of roles among the many players. While the IESO has responsibility for coordination of the SMSIP and the MDM/R, the Ontario Ministry of Energy will continue to be responsible for ongoing policy development and SMI programme monitoring. The government is working closely with the IESO, LDCs, and other agencies and stakeholders to develop and deliver an effective consumer education and awareness programme to introduce the concept of smart metering and to identify its many benefits.

The long term effectiveness of smart meters hinges on the extent to which electricity consumers are able to use the technology to their advantage. A well functioning electricity market balances supply and demand, resulting in prices that reflect the true cost of consumption as well as the marginal cost of supply. By giving customers the information required to respond to time-of-use (TOU) rates, customers are able to participate as fully engaged partners.

Using the technology to shift demand to off-peak periods allows customers to manage their consumption and, as a result, their energy costs. “Last year the Ontario system peaked at 27,005 MW, but only exceeded 25,000 MW for 32 hours. Demand management is vital during peak periods of electricity usage because reducing demand is just as effective as increasing supply,” said Paul Murphy, president and CEO of the IESO. “It’s a powerful tool that can address near term reliability problems, enhance long term system adequacy, mitigate peak prices and price volatility, and reduce the need for new generation.”

Customers will have the option of having TOU rates applied to their consumption or to opt for hourly prices. Currently, about 25 percent of Ontario customers have chosen to purchase energy from retailers. The TOU rates will be set by the Ontario Energy Board (OEB, the regulator) and consumers will know in advance what shifting demand will cost or save. The OEB is considering the establishment of a critical peak pricing regime in 2008 which will provide further incentive for demand management during periods when it is anticipated the power system could be under stress.

THE PROJECT
“Ontario is an anomaly in many respects,” says Edward Arlitt, senior business analyst with the IESO’s information technology and infrastructure division. “Providing a set of services to nearly 90 distribution companies of widely varying size using 20 different Customer Information System/billing systems and a variety of metering technologies, is somewhat different from most other jurisdictions that have implemented smart metering projects where their sector structures offer a simpler implementation process.”

He goes on to point out that providing centralised MDM/R services to so many organisations also requires a good deal of attention to the rules that govern that provisioning, from service levels to consideration of change requests to ensuring consistent standards for interfacing with the MDM/R.

In representing so many interests, the IESO started by developing a strong set of requirements that reflected the needs of the LDC community, which was key in the acquisition process. As a not-for-profit entity with an obligation to ensure fairness, neutrality and transparency in its contracting policies, the IESO took a rigorous approach to procurement, including using the services of an independent fairness commissioner.

At the time of the evaluation exercise, the SME role had not been allocated, so the IESO wished to outsource operations of the MDM/R in addition to its implementation, as the capabilities of the enduring SME were unknown. In order to establish the feasibility of this approach, the IESO issued a public request for information (RFI) to the IT vendor community for an MDM/R Systems Integrator (SI) and MDM/R Operational Service Provider (OSP) on 27 July 2006. The responses indicated that the “deliver and operate” option was very viable and nine respondents were invited to take part in the subsequent request for proposals (RFP). The RFP was accompanied by functional specifications, logical application and data architecture (LADA), business processes, service and performance levels, timelines for delivery, system testing, etc.

The contract was awarded to IBM Canada, providing a solution based on software from eMeter of California. In the first months of 2007, the IESO worked with its LDC stakeholders and eMeter to turn the RFP specifications into design documentation, including the details of AMI and CIS interfaces and the reports that the system would be producing. These documents first appeared in March, but have been modified and extended since.

Alongside this effort IBM and eMeter extended the eMeter software to cater for the full complement of Ontario requirements, including for example the access controls required to maintain confidentiality in a multi-distributor environment. The initial version of the system, Release 5.0, was handed to IESO to test in July. Since then, the IESO team in conjunction with Newmarket Hydro, one of the pioneering LDCs, has been exercising the system, finding defects and testing the fixes.

Recently the production, testing and backup environments were built and tested by IBM and an updated release of the MDM/R was installed. These environments contain meter information that is synchronised with Newmarket Hydro’s production CIS and receive hourly meter reads on a daily basis. This is known as the Production Pilot, although the system is not being used to produce bills at this stage until the system has been run and the results very carefully checked. 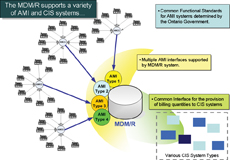 GOING FORWARD
Although a lot of attention is being directed at the performance of the production pilot, there is a new system release (5.2) to look forward to shortly. In addition, another three LDCs are in various stages of testing and a further eight are at various stages of development. Twelve out of 90 LDCs may not sound like many, but in total they will operate over 60 percent of the smart meters in the province.

The LDCs are expected to take many months in preparing to enrol with the MDM/R initially and even more months before all their meters are registered, and the IESO expects the activity to spread over the allotted period to 2010. A sizeable investment will be made in training LDC staff in advance of the rollout of the SMSIP and in assisting them during their integration testing and on-boarding efforts.

When asked how he views the project, Limbrick replies, “We’ve come a long way since we were asked to take this on 15 months ago, but to use a hackneyed metaphor, this isn’t a sprint, it’s a series of back-to-back marathons and I’m sure we will still be learning the trade of providing an MDM/R service a year from now. Our job is to make it work and to make the transition to smart metering as easy as we can for our LDC partners.”