The prepayment time sharing energy meter and its vending management system should provide extremely high security in all situations, with features including accurate and stable measurement functionality and strong anti-electromagnetic interference. It should guarantee high security in the process of data measurement and exchange, and should guarantee accuracy in measurement and settlement. It should also guarantee that the benefits to both customers and power suppliers are maintained.

The prepayment time sharing energy meter constitutes an organic unit with the vending management system and the prepayment key management system (the issuing card). Key to its design is security, and therefore it is necessary to test the security of the system from end to end, from the meter production process to operation management.

CARD SECURITY
Because the number of users of the prepayment time sharing energy meter is large, and the exchange of data is through the IC card after the meter is installed, the management system cannot monitor the data in real time and so the user’s card must have a high level of security. In this case the prepayment time sharing energy meter has a CPU card with key control and high level security to ensure that the key cannot be intercepted or read during operation. In the process of issuing cards, the keys are randomised in order to reduce the possibility of the code being broken by a hacker, and also there is encryption protection during data transmission to prevent the possibility of altering the data.

The smart card has the following advantages over the logic encryption card:

SECURITY IN THE PRODUCTION AND OPERATION PROCESS

The ESAM becomes part of the finished product, and has all the characteristics of a highly secure mechanism, with a standard encryption algorithm producing a subsidiary key according to the dispersion factor, etc.

The ESAM is used to save the data in the meter and the security key, whose safe authentication and data transmission in the operation process is carried by the user card and the ESAM. The ESAM is managed by the operation management system. When the meter is tested, the key in the ESAM is changed into an operation key by the revision key card of the management system. In this way, no-one in the factory can rewrite the data in the energy meter without authorisation.

The ESAM security module can be made by the meter operations management department and then sent to the manufacturer.

OPERATIONAL MANAGEMENT SECURITY
In the prepayment time sharing vending management system, system security is based mainly on the release and management of the key. Therefore there must be a set of appropriate cards as well as their releases and the transfer mode of the ESAM security module key. Because banks, public utilities (water, electricity, gas and heat) management sections, meter manufacturers, card suppliers, system integrators and others form part of the system, and each link is associated with the key management. If the key is stolen in the data transmission process, the security will be greatly affected. Thus the card release and key management structure is essential. The key release transmission takes on multiple levels from master control card to first class card, second class card, application card and so on, with each level transmitted to the next in a scrambled form. 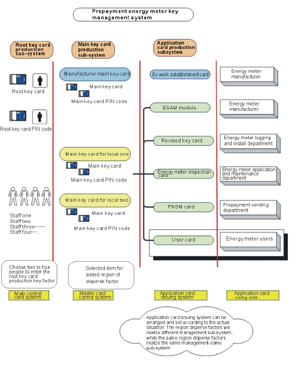 ESAM SECURITY IN THE INSTRUMENT
In the key management system, the power supply department is responsible for the key management and can decide to make the system correlation agreement public, and to issue the ESAM module so that each meter manufacturer can produce the meter based on the required demands of users and the special ESAM module.

The ESAM module stores the power purchase data and other important parameters, including the main key in document form, which can be read and changed as required. Each key from the production state in the ESAM can be changed into a working condition key by the operation management department changing main the key card, the parameters being written into the ESAM after passing the multistage key security certification. The MCU on the energy meter can only do the decreases progressively during operation of the power user’s account and the read operation of each run-set parameter, but it cannot reset the default parameters in the ESAM or supplement the vending data.