One of the more evident trends at the recent Metering Europe 2006 event in Copenhagen was that both meter manufacturers and utility companies are placing an increased emphasis on the use of communication networks to create added value for their systems and also to leverage from infrastructure investment already in place. The advantages around automatic meter reading (AMR) systems based on either power line carrier (PLC) or cellular networks like GSM have been well documented in this publication.

However, with the increasing roll-out of a backbone AMR infrastructure there has arisen the possibility to bolt on additional services by piggy-backing on the communications network already in place. One such add-on service is the multi-metering system, or what Ed Finamore called in Issue 3, 2006 of this magazine the “integrated solution for multi-service utilities”. This could include, for example, the addition of gas or water metering in addition to the electricity metering function.

This certainly makes sense where the utility company in question provides more than one service but also opens up opportunities for licensing of network bandwidth to noncompeting utility companies that do not have such a network in place. It is thus similar to the virtual network operator model found in the cellular world, where operators can lease network capacity from established operators without having to invest in the capital-intensive infrastructure themselves.

Where does short range wireless fit in? 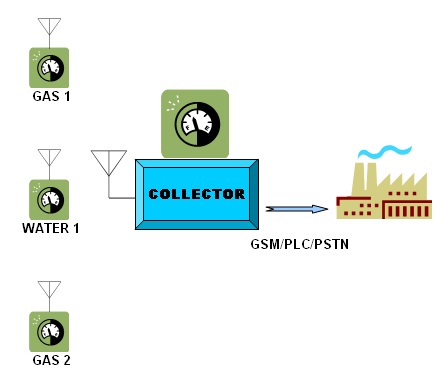 Assuming the concentrator node utilises a GSM, PLC or even PSTN backbone network then the use of short range wireless to gain access to this node becomes attractive due to its low cost and the possibility of significantly longer battery life than competing technologies.

The relative cost advantage of short range wireless can be as much as eight times over a comparable GSM solution. Battery life of over ten years is possible using low duty cycles, i.e. powering on for only a low percentage of the time, in conjunction with low power-down modes available on modern radios and microcontrollers. The use of short range wireless as a ‘bridge’ to the existing network is illustrated in Figure 1.

What type of short range wireless?

The moniker ‘short range wireless’ covers a wide umbrella of technologies including WLAN, Bluetooth, ZigBee and proprietary wireless technologies. Which one to choose depends on two important considerations which are outlined below.

Possibly the first consideration is whether to use unlicensed or licensed spectrum. Licensed spectrum does not come for free of course but offers the reassurance of a radio environment almost free from interference – almost free because one can never account for rogue users, although recourse is possible through the local telecommunications regulator. Licensed bands often allow higher output powers than in the unlicensed section, which can increase the range of the radio link.

The unlicensed portion of the spectrum, often called the ISM (industrial, scientific, medical) bands, offers the advantage of free access to the radio spectrum once certain regulations on output power, spurious emissions, etc. are met. Although it is true that there are an increasing number of users in the unlicensed bands, including roaming WLAN users, Bluetooth, ZigBee and other nodes, most of these are concentrated in the worldwide 2.4 GHz and 5.8 GHz ISM bands.

It is possible to operate in these congested bands by employing interference resilience schemes like those used in Bluetooth and ZigBee, i.e. frequency hopping and spread spectrum respectively. Alternatively one can operate in the sub- GHz bands, which have attracted less usage due to the nonuniformity of bands worldwide. Table 1 gives a summary of the unlicensed worldwide bands below 1 GHz.

The second important issue to consider is the range requirement. Lower frequency will tend to give better range and thus many metering companies are looking to the sub- GHz region of the spectrum for this reason. This is especially important where meters can be buried under concrete, as is often the case for water meters or where there is a barrier in between the remote meter and the collector node. 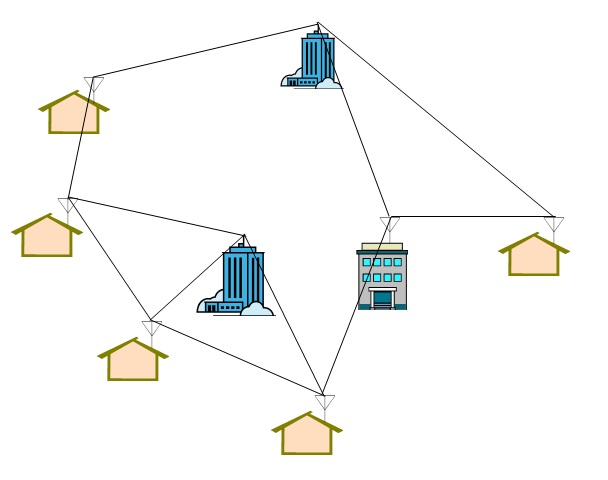 ZigBee aims to get around the inherent poor propagation qualities at 2.4 GHz by employing a mesh network where traffic can hop through several nodes to reach its end-point. This is illustrated in Figure 2. However this requires a certain density of nodes to be deployed to take advantage of this ‘multi-hopping’ and does not overcome the underground meter problem as the path loss might be too high for the next node in the path to receive correctly. Many ZigBee manufacturers have attempted to reduce this problem by providing reference designs that allow an external power booster stage, but at the expense of increased current consumption.

Many RF engineers use the Deterministic Two-Ray Model (DTR) to estimate communication range for a line-of-sight scenario. This can be used as a benchmark figure to compare against other solutions. For example using the ADF7021 (sub-GHz RF transceiver) from Analog Devices it is possible to output at +13 dBm or 20 mW without an external booster stage.

At 4.8 kbps the sensitivity is -119 dBm, which gives a total link budget of 132 dB, assuming unity gain antennas. With antenna heights of 3 m and 1 m respectively to mimic a typical installation, the theoretical range is 3.4 km. This tallies well with a measured line-of-sight range of 3.2 km using the ADF7021. Of course, walls and ceilings will introduce more path loss, typically 10 to 15 dB loss for a wall and 12 dB to 27 dB for a floor depending on the material used. Even plugging in a 40 dB loss to account for propagation loss through both a wall and ceiling will give a range of about 200 m using the ADF7021, which should be sufficient for most residential houses without the need for a repeater.

Some metering companies are investigating the use of mesh networks, and in particular ZigBee, to overcome some of the propagation issues described at 2.4 GHz and also to provide an element of self-healing as traffic can re-route around a faulty or inactive node.

There have been only a few publicised cases of implementation of a wireless mesh network in a metering application to date. However wireless mesh network technologies require a moderately sized deployment to fully take advantage of the selfhealing characteristics touted by their developers, which can be costly in certain topological conditions.

Alternatively a star network offers a more simple topology and can allow use of features like dynamic power scaling, where the data concentrator node can instruct a remote unit to back off on its output power if excess signal strength is received at the receiver.

This is similar to what is done in cellular systems and has the advantage of both reduced levels of co-interference (between one’s own systems) and also the possibility of increased battery life due to the lower signal levels. This type of approach is considered difficult to implement in a distributed mesh network. For a multi-metering application where a remote unit needs to connect to the data concentrator node, a star network looks attractive, as there is no need for the added cost of repeater nodes.

It is possible to significantly increase the battery life of a short range device system by powering on the unit periodically and spending the rest of the time in ultra-low power down. For example the ADF7021 boasts a 100 nA power-down current. Although the headline receive and transmit current consumption numbers are important in estimating the average battery life of a system, it is also important to make sure the radio is powered up efficiently in stages to minimise the average current drawn. Battery companies like Tadiran claim a 20-year battery life is possible with their hybrid batteries, so every micro-Coulomb saved is important to realise multi-year operation.

Multi-metering systems look like an attractive solution for utility companies that have rolled out a backbone communications network for AMR and want to leverage from their existing investment by linking to other meters in a residential setting like gas and water meters. Short range wireless, and in particular sub-GHz wireless, looks like an attractive fit for such a solution and is garnering much interest from metering companies worldwide.

The ADF7021 from Analog Devices, with its ability to operate from 85 MHz to 940 MHz, allows it to be used as a solution worldwide with minimal hardware and software changes. In addition, its best-in-class sensitivity helps achieve range, even when the remote units are blocked from line-of-sight of the collector node by concrete walls and floors. For further information please visit the ADF7021 product page on the Analog Devices website.