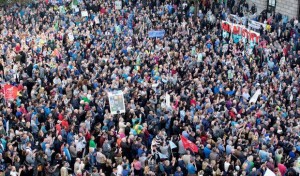 Protests have been held around Ireland in response to government plans to start charging for domestic water services. Protests, which have been ongoing since at least May 2014, have been mostly peaceful, although in recent months, these have become progressively more violent.

Irish Water, the water services company formed in July 2013, will be partially funded through the water charges.  Originally these services were provided by local authorities but Irish Water has been mandated to take over these service as of 1 January 2014. Protests have mainly revolved around the charges being imposed and the need to register with Irish Water to enable metering and billing for water to be implemented.

Earlier this month GMC Sierra Limited, one of the major regional contractors installing meters on behalf of Irish Water, placed staff on protective notice (indicating they were in danger of being laid off).  While the company has been contracted to install more than 100 000 meters in and around Dublin, work has been obstructed by harassment, intimidation and assault at some work sites around the city.  The result is that work has stopped in areas such as Donaghmede, Edenmore, Coolock, Crumlin and Rialto.

Irish Water told reporters of the Irish Independent newspaper that “our requirement is for contractors to deliver the metering programme to time and budget requirements. How GMC Sierra manages its contractual obligations in relation to meter installations is a matter for GMCS itself”.

Several court proceedings, including one where it is claimed an “irate” woman protester punched a water meter installer in the torso, have been heard.

In May 2014, the Irish government confirmed that average water bill will be €240 per year per household. Households will receive a free allowance of 30,000 litres per household per year, and an additional cost allowance for children under 18. Failure to pay for water will result in water pressure being turned down.

According to Irish Water, “clean water is expensive to both produce and manage. … Our current funding model is simply not sustainable. Despite the good work of the Local Authorities, much greater investment nationally is needed to address weaknesses in the water system, including high leakage rates, varying quality standards, and disruptions to supply.”