As the utility value chain continues to be pulled apart into pieces around the world, the answer to the “who” will pay gets more complex. In the traditional ownership model, all the utility functions had a single owner and so benefits that crossed multiple business segments (e.g. distribution, transmission, generation for electricity) could be paid for by the single owner of the utility. Today with the European Union unbundling their utilities and other utilities splitting into separate companies, as well as new companies building facilities that are not owned by the traditional utility, the question has a much more complex answer. In the end, of course, the customers will ultimately pay the cost – they always do. But, along the way, where will the costs be allocated and who will have to dig deep into their own pockets to pay for the system, until the customer eventually pays that cost back? How much of the cost has to come from internal savings? How much of the cost is considered new capital or new operations and maintenance (O&M)? New costs are typically passed directly on to the customer. These debates are going on in many regulatory bodies today. It is not an easy question to answer and no two regulatory bodies have given the same answer yet.

One of the issues that has had little open discussion is – Who benefits? It only makes sense to look at the parties that benefit when allocating the cost of the system. The discussion always seems to boil down quickly to one or two parties and the benefits they get from the implementation of smart metering. While this is a good discussion to have, it has its pitfalls. The first pitfall is that if one party is going to pay the whole cost, they may choose a less costly system with fewer benefits for the whole value chain, than if everyone either shared the costs together or the costs were allocated such that the installing party got paid directly by the customer for the other benefits that hopefully they will ultimately benefit from. The second pitfall is that if too much cost saving is pushed at the installing party, they may choose to stall the installation as long as possible or they may end up with an incomplete system that does not really get all the benefits – the meters are installed, but the systems and staffing to support the operations may get short changed. 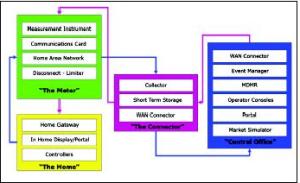 Smart metering has a large number of components and each of those components generates value and costs (Figure 1). Most implementations initially focus on the end point and its capabilities to make the system run. This is a useful way to do things in a system where timing of information is not important. In the systems where the timing of information is important, the network components are equally important to focus on. In Figure 1 four main components are shown: the meter, the home, the concentrator, and the central office. Determining which benefits the system will deliver will have a large impact on the first three and very little impact on the central office. So determining the benefits delivered early in the process and using that as a starting point for selections for the meter, home and concentrator is a very useful way to start. If the distribution company is responsible for the deployment and they are asked to find deep cost savings to fund the project, they will probably focus on benefits that will help them make the cost savings and ignore the rest of the benefits, unless they are forced to add them to the system by the regulator. This is an unfair position to put the distribution company in and it results in a system that does not provide the highest value to the customer or any other part of the value chain. Remember that integration into the systems in the central office will have to be done in order for any of the benefits to be realised.

CATEGORISATION OF BENEFITS
In Table 1, there is a categorisation of benefits and who benefits from them. There is no attempt to put a value on the benefits, because the business cases vary widely from country to country. Rather this table attempts only to allocate benefits to each part of the value chain. Many will argue that the allocation to the customers is too small and that the allocation to the regulator is too large. The criterion for allocating a benefit to the customer was that the average customer in this class would see a direct cost reduction on their bill; while they will see a benefit in an indirect fashion from almost everything listed, the ones allocated to them show a direct cost reduction to the AVERAGE customer. For the regulator, the allocation was made if the regulator would be able to better regulate the market and have better information available to manage the regulatory process. One area where the table is incomplete is in filling in the value chain for the gas and water benefits. Since the value chain is an electric one, it was not useful to complete the water and gas benefits that did not apply to electricity, but it would not be hard to transform the table to support water or gas implementations. 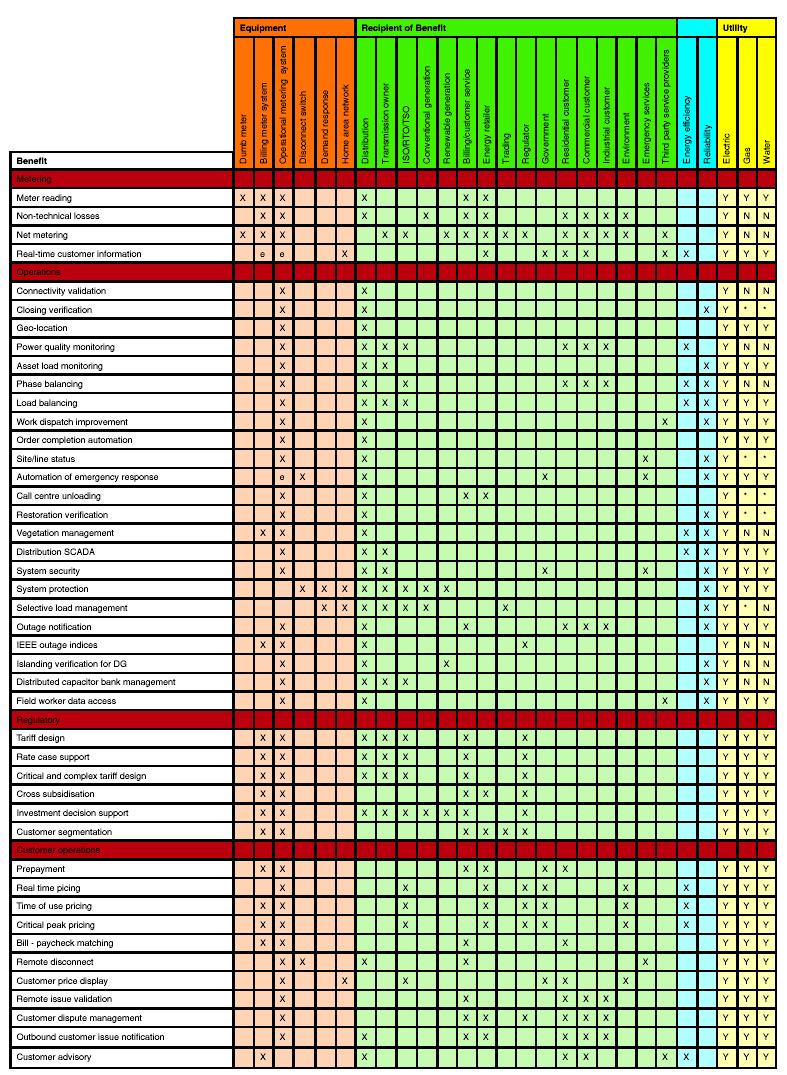 The table is really four tables in one. The first set of columns in the table shows what equipment would have to be deployed to gain the benefit. The “x” is in the first column that would support the benefit, so if a “dumb meter” is marked for a benefit, the “billing” and the “operational” meter would both support the benefit as well. The “e” in a meter column indicates that that is the minimum class of meter that would be required to support the other equipment installed and enable that benefit, and that the benefit is delivered by the item on that line that has the “x” working through the meter with the “e” in its column on that row. The reason for doing this is that in some markets the meter for that function may be replaced with a different box (e.g. France’s energy box). 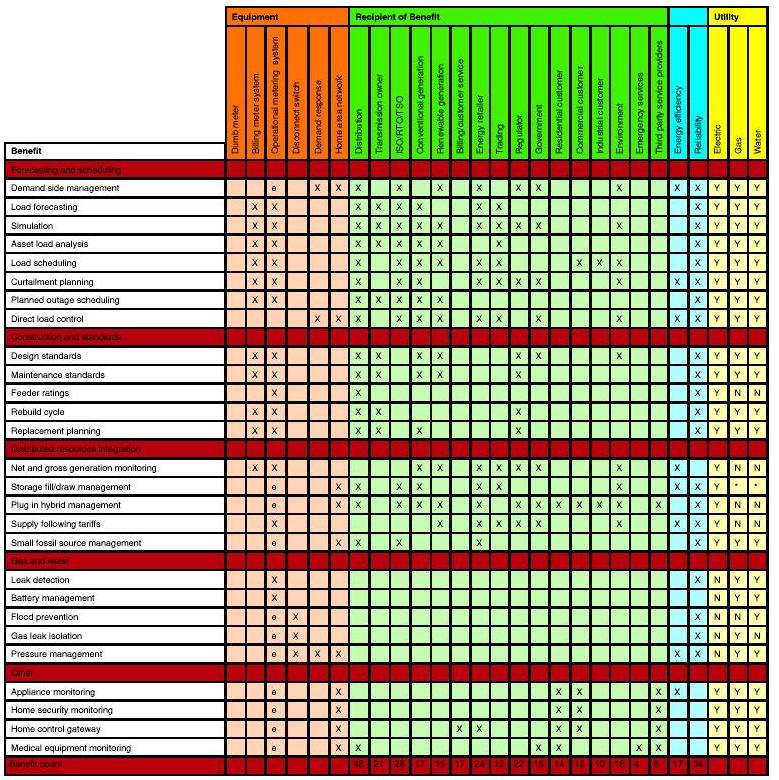 The second section of the table is the value chain and the columns cover all the pieces of the electric value chain. Again it would not take much work to transform this table for gas or for water. All of the columns where the benefits should be allocated are marked for each benefit. Again there is no attempt to assign value to the “x” in the columns or to assign a percentage of the “x” to a specific column. This is a complex process that has to be done on a project by project basis. The table is valid for everyone because it does not attempt to assign values, only to show the allocations. At the bottom of each column in this section is a count by the column, which can be used as a discussion starting from the percentage of the allocations that belong to a participant in the overall market that the project is being done in. For instance the Transmission owner sees 21 of 280 allocated benefits or approximately 7.5 percent. Does that mean he should bear 7.5 percent of the costs? No, it does not, but he should bear a portion of the costs and as a starting point for a discussion, 7.5 percent is not a bad place to begin. This will force him into the discussion and into helping quantify the benefits he sees. The same can be said for every participant in the market. The goal of this part of the table is to help identify who is the rightful beneficiary and help to make it clear why some benefits make it into rate cases and others do not, and why some parties who are the deployment owners will focus on some benefits and others on different benefits.

The third portion of the table looks at which benefits help with energy efficiency and which with system reliability. This is a discussion that many regulators and utilities struggle to have as they start down the path of installing the system for one overarching goal and then have to try to determine if the other benefits can be placed within that goal or the programme focus has to be expanded to cover the additional benefits that the customers can gain from the system.

The final portion of the table (the last three columns) covers which benefits would be gained by independent installations (e.g. gas only) of smart metering. The table was created with electricity at its core, so this portion helps to weed out some of the benefits that do not apply to water and gas. The “*” in the column means that pressure transducers or flow sensors would be required to implement this in a water or gas environment. Meters with these types of sensors are not the norm today and so most implementations will probably forego these benefits, since the costs of the meter rise rapidly when these components are discussed. In some cases though, the benefits listed with the asterisk can be realised from the strategic deployment of very small numbers of meters with these advanced capabilities.

To create a discussion document for a specific project, the easy way would be to remove the rows that contain benefits that are not being discussed and then count the benefits at the bottom of the table for the remaining rows. That should help focus the “who benefits?” discussion and also help to determine who the stakeholders are. In all too many cases many of the stakeholders will choose to sit on the sidelines and let someone else do the job, so long as they can eventually figure out how to get access to the benefits they want from the system. The problem is that as the implementation goes along, if the benefits were not planned for up front, it may be cost prohibitive to gain the benefits later, up to and including having to re-do the full installation.

One interesting way to look at a project is to remove the rows that are out of scope and see what portion of the benefits to each participant in the market will be delivered by the planned project. In general, if it is less than 60 percent there is a high probability that the project will never be completed, since there will be enough missing value that the regulators will eventually have to step in again and re-open the discussion.

A word of caution is that, no matter how good the organisation is, it cannot absorb all the change that is created by attempting to gain all the benefits listed here in a short period of time, so once the value of the benefits is known, creating a timeline to implement the value is important. Normally with a three to five-year deployment of the meters, it will take five to seven years from the first meter install until most of the planned benefits are up and running, so the benefits that have the highest value should be prioritised with a partial installation of meters with the focus on gaining those benefits early in the project, then moving through the benefits over time to complete the harvesting of the benefits.

Definitions of the equipment and benefit recipients (columns)

Definitions of the benefits (rows)