“Reliability and quality of service are obviously the key factors that we have to be looking at,” says Olivier Beaujard, vice president of Business Development at wireless solution provider Wavecom SA.

“Products must have long life duration, often in harsh environments, and they must be easy to maintain.”

Wavecom, established in Paris, France in 1993, and now with subsidiaries in China, Hong Kong, the UK and USA, is very much a pioneer in wireless innovation, with the development of dedicated applications for M2M (machineto- machine) communication in the automotive and industrial sectors – including the energy sector for metering and other applications.

Indeed approximately 70 percent of the company’s 450 employees globally are involved in research and development at both the hardware and software levels.

“Key criteria for our products are that they are easy and transparent to use by people who are unlikely to have expertise in the technology,” says Beaujard.

And such is the basis for Wavecom’s series of offerings launched earlier this year under the heading of Intelligent Device Services (IDS) that enable remote monitoring and maintenance of products in the field.

INTELLIGENT DEVICE SERVICES
“IDS is intended as a full turn-key service offering,” Beaujard explains, with features including real time monitoring of devices, whether by the utility, an intermediate service provider, or Wavecom itself, and remote upgrading of software, not only of the communication device but also of the meter itself.

“It is crucial to know the status of remote products and to be able to upgrade them, and of course wireless makes it easy to do over the air,” comments Beaujard. Citing the conclusions of recent industry reports that savings derived from establishing a remote device management system can quickly add up, he says that in an example of a company with 50 technicians making an average three service calls per day, the savings with IDS from reducing the number of dispatchings could add up to as much as $2.3 million annually while, at the same time, dramatically improving the quality of service response.

Wavecom’s IDS is based on the powerful, field-proven, OMA-DM-compliant (Open Mobile Alliance – Device Management) client server software suite. This builds on existing Wavecom DOTA (Download Over-the-Air) capabilities, enhanced by compression technology, reducing the size of the downloaded software and air-time costs by up to 95%. It will be combined with remote monitoring features in a range of existing and new Wavecom Wireless CPUs® that are pre-programmed to accept remote activation. DOTA fully respects the integrity of metering code and does not alter the metering key functions certified by the legal metrology authority. 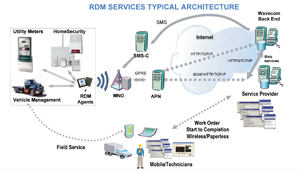 “IDS makes it possible to easily and cost effectively monitor and update products in the field,” says Beaujard. “Equipment manufacturers and service providers can save significant time and expense by running remote diagnostics, upgrading their own applications and core wireless firmware, adding new features or following evolving standards, thus significantly reducing the total cost of ownership of metering systems. This is a key advantage for utilities implementing AMM/AMR projects.”

THE INSIM
Another new innovation from Wavecom that Beaujard comments on is its inSIM – an industrial subscriber identity module (SIM) integrated into the wireless device. “The SIM is built in at the silicon level in production and effectively becomes part of the hardware,” explains Beaujard, pointing out that in this form the SIM is both much more rugged and more secure than the traditional mobile phone SIMs that are built on plastic cards.

“The environment of the meter often includes extreme temperatures and temperature variations, and in the case of water meters humidity, and with an inbuilt SIM there is no possibility of a bad connection,” says Beaujard. “Moreover unlike a conventional SIM it cannot be removed or stolen, and enables the meter to be completely sealed.”

The inSIM, which like a mobile phone SIM contains subscriber authentication and relevant algorithms, is an embedded option in selected Wavecom GSM/GPRS Wireless CPU® families including the Quik, Plug & Play and the Wireless Microprocessor® range.

Other advantages of the inSIM, Beaujard points out, are that it is tested as part of the device testing, rather than additional SIM tests having to be performed, and that it reduces the number of components necessary, and thus ultimately the final cost.

POWER CONSUMPTION
One of the key issues for a remote device in the field for an extended period of time is the level of power consumption, particularly in gas and water meters. This may be optimised in both the hardware battery technology, as well as in the software. For example the processor can be programmed to go into a very low power mode when not in operation.

Beaujard comments that Wavecom devotes a significant proportion of its R&D resources to its software – the C-based Open AT® suite – and is continually optimising and enhancing this software. To this end a special power saving feature, VariPower, has been incorporated.

INDUSTRY STANDARDS
Standards underpin all of these developments, yet there is a huge lack when it comes to the standardisation of communications in metering, Beaujard says.

It is largely for this reason that Wavecom has restricted itself to the standard GSM/GPRS protocols of mobile communications, and also why it has adopted an open software architecture approach.

“We can’t cover every communications option on the market,” Beaujard says, noting that through the software and potentially additional hardware, other protocols such as Bluetooth and ZigBee may be introduced.

“There is no need for an additional processor with such add-ons and the Open AT software suite is very flexible and may be tailored to the customer’s individual needs,” he says. Moreover Open AT is constantly updated with normally one big release per year in addition to ongoing smaller releases throughout the year.

“GSM is very well established as a standard in the market.” Yet there is a need for standardisation in communication for metering, Beaujard notes, adding that Wavecom has been researching the market for a suitable industry body to take the issue further. Unlike for cellular technologies for which there are powerful existing standards bodies, there are no such bodies for low power RF and PLC technologies.

“We feel we need to take the lead in this standardisation, whether it is within one of the existing bodies or in a new dedicated body,” Beaujard says. “There is a lot of work to do in terms of defining the interface and to achieve it we need the involvement of all the interested parties, that is utilities as well as suppliers.”